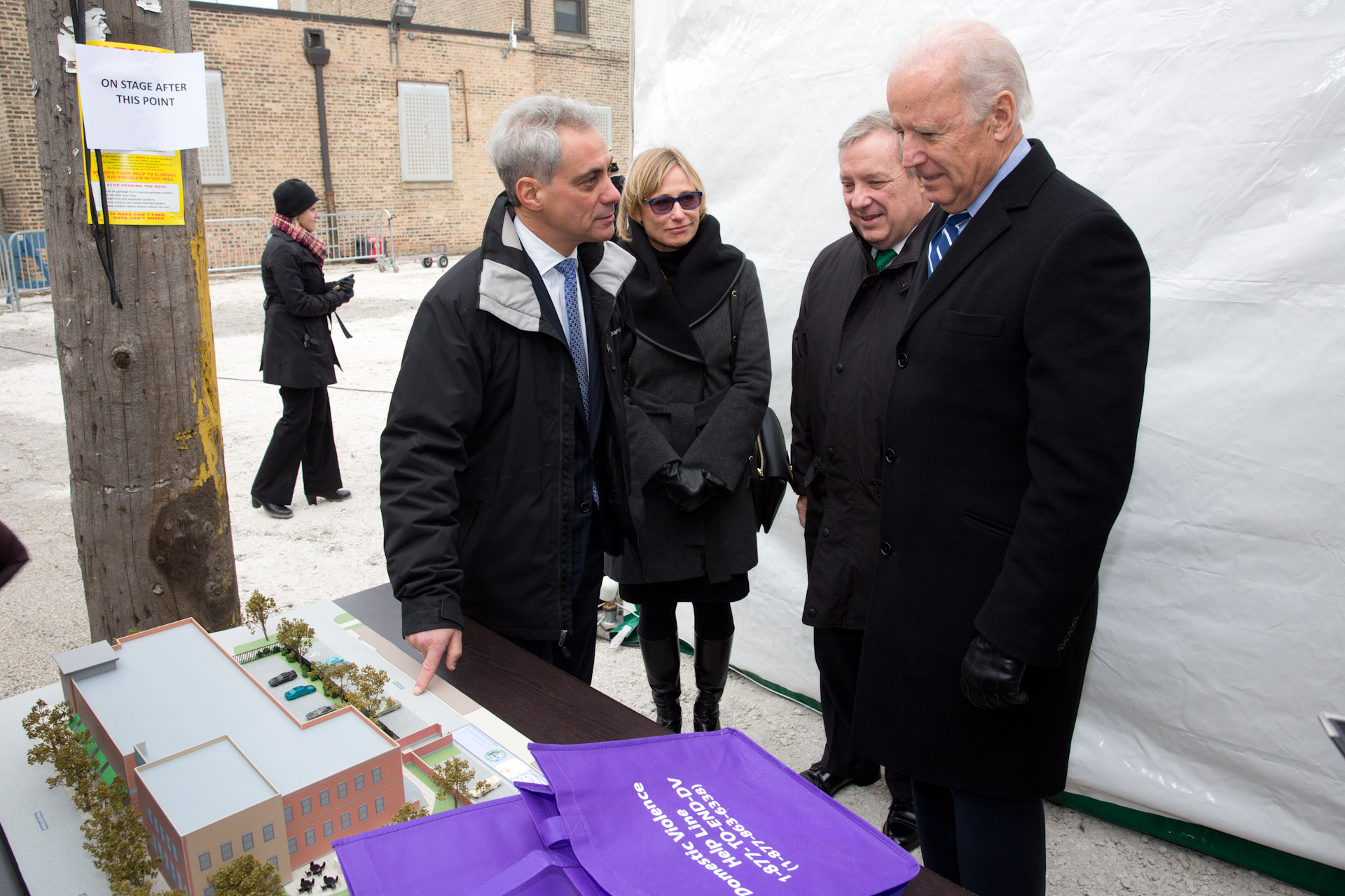 Yesterday, Vice President Biden delivered remarks at the groundbreaking ceremony for Chicago’s first new domestic violence shelter in over a decade. Wings Metro, a state-of-the-art facility, will increase the number of available beds in the city by 36% and expects to serve 100 families in its first year of operation after it opens its doors in June 2014.

The creation of this shelter comes at a needed time in Chicago. In 2012, there were 51,174 reported domestic incidents in the city. In addition, 56% of women in homeless shelters in Chicago stated they had been victims of domestic violence, with 22% reporting domestic violence as the immediate cause of their homelessness.

In his remarks, Vice President Biden asked us all to imagine “how cold today feels to the woman who is sleeping in a park with her four children because she had to run out in the night.” Wings Metro will go a long way to support survivors like this woman and will reduce family homelessness in Chicago. The shelter, which was developed through the collaboration of Women in Need Growing Stronger (WINGS), Metropolitan Family Services, and the Greater Southwest Development, will increase the number of available beds in the city from 112 to 152 and will provide comprehensive services to survivors and their children. The Vice President noted in his remarks that this new facility is about more than just shelter—it is about giving survivors access to the services, privacy, and job training they need to rebuild their lives. 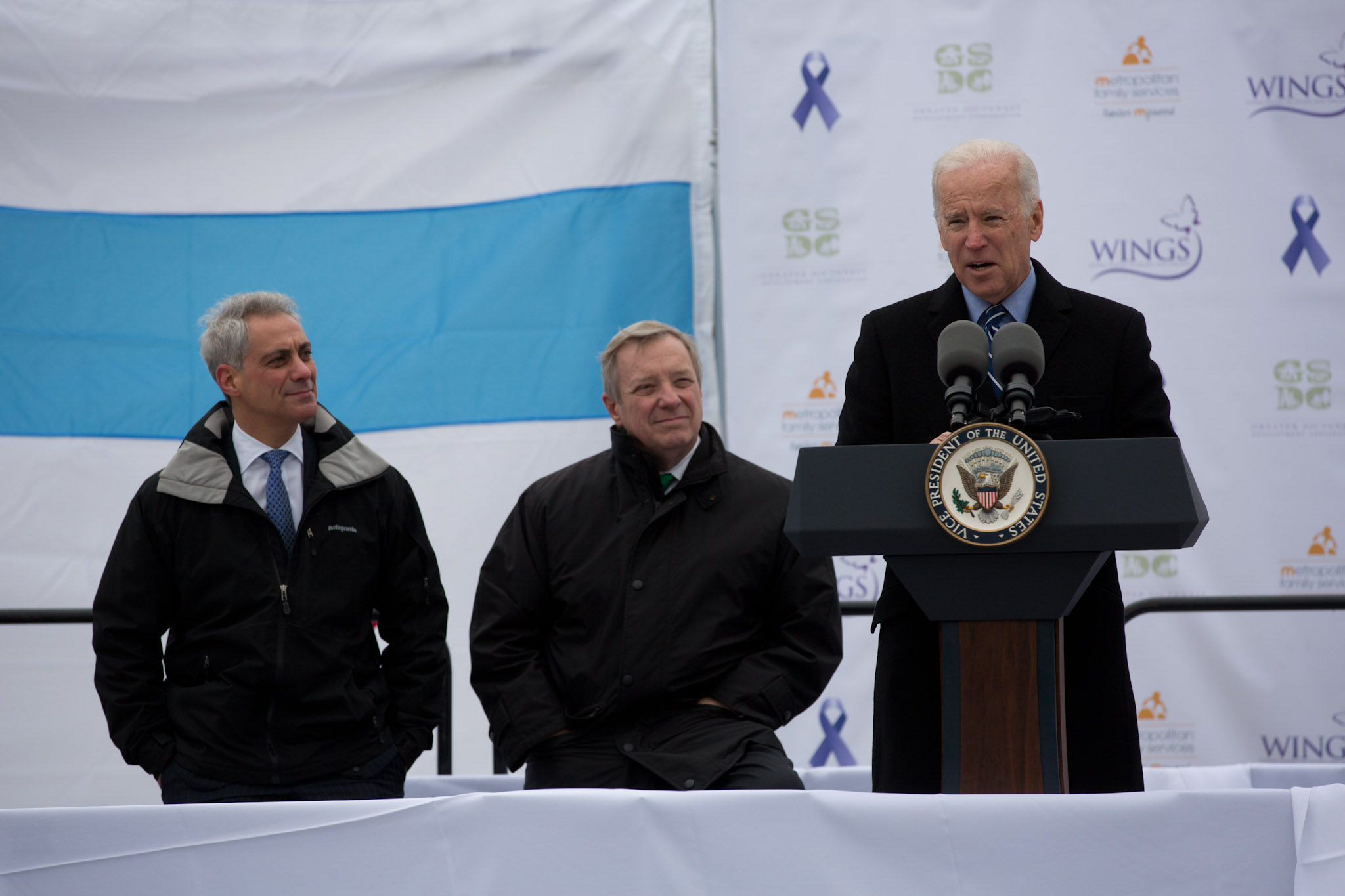 The Vice President was joined by Mayor Rahm Emmanuel and Senator Dick Durbin, both of whom have shown a strong commitment to the fight against domestic violence. Since being elected mayor of Chicago in 2011, Mayor Emmanuel has committed to expand funding for domestic violence services. He has dedicated $123,000 to provide court advocates to assist an additional 1,500 survivors as they go through the legal proceedings of their cases. Senator Durbin was one of the leading House sponsors of the original Violence Against Women Act; he has continued to be a strong supporter of the legislation after his election to the Senate.

This shelter will help survivors all over the city of Chicago rebuild their lives in safety. Still, we have much more to do to end domestic violence once and for all. Even after this facility is complete, there will only be 152 beds in Chicago. Vice President Biden is absolutely right when he said that “there will never be enough beds unless we change the culture.” Under his leadership, we have made strides in changing attitudes; since the passage of the Violence Against Women Act, the annual rates of domestic violence have dropped by 64%. This legislation and activism on the ground has demonstrated that abuse is no longer something to be tolerated in silence—it is a crisis that demands our attention.

The Vice President has continued to work tirelessly to change the culture and to end the cycle of abuse.

He has repeatedly called upon men to work as allies in ending violence against women. He has taken action to reduce the domestic violence homicides that claim the lives of three women every day. To combat homicide, the Vice President has also led a monumental effort to reduce domestic violence homicides by screening survivors for risks of homicide and connecting them with key services. The federal government as a whole has committed to ending abuse; the Department of Justice publicly released the first comprehensive federal agency policy on domestic violence just last week.

I applaud Chicago’s commitment to ending domestic violence and supporting survivors, and I am confident that we are changing attitudes across the country on this vital issue. We are making strong progress, and I look forward to the day when no woman will need to flee her home because of abuse.

Lynn Rosenthal is the White House Advisor on Violence Against Women