November 27, 2013 at 11:18 AM ET by Lindsay Holst
Twitter Facebook Email
Summary:
President Obama visited the DreamWorks Animation Campus in Glendale, California, on Tuesday, where he spoke about the economy before an audience of hundreds of Dreamworks employees, including CEO Jeffrey Katzenberg. 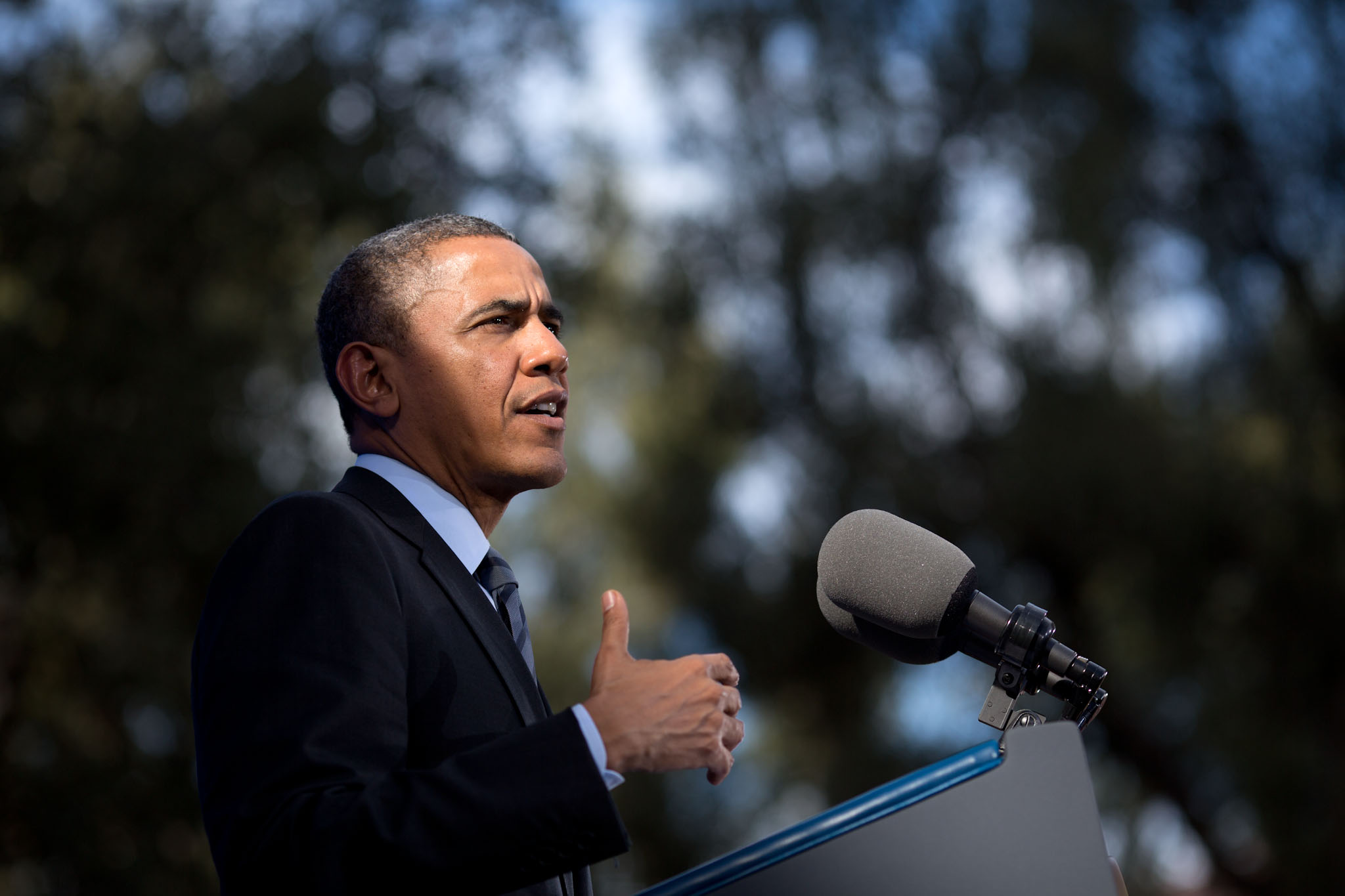 Yesterday, President Obama visited the DreamWorks Animation Campus in Glendale, California, where he spoke about the economy before an audience of nearly 2,000 Dreamworks employees, including CEO Jeffrey Katzenberg.
The President began by calling entertainment "one of America's biggest exports" -- and, in some ways, a part of American diplomacy:

It’s part of what makes us exceptional, part of what makes us such a world power. You can go anywhere on the planet and you’ll see a kid wearing a “Madagascar” T-shirt. You can say, “May the Force be with you” -- they know what you’re talking about. Hundreds of millions of people may never set foot in the United States, but thanks to you, they’ve experienced a small part of what makes our country special. They’ve learned something about our values. We have shaped a world culture through you.

He then reflected on the significant economic progress that we've made over the past several years: including reining in spending after years of trillion-dollar deficits, changing the tax code to be fairer toward middle-class Americans, winding down two wars, and creating 7.8 million new jobs over the past 44 months -- all the while cutting our deficits by more than half. 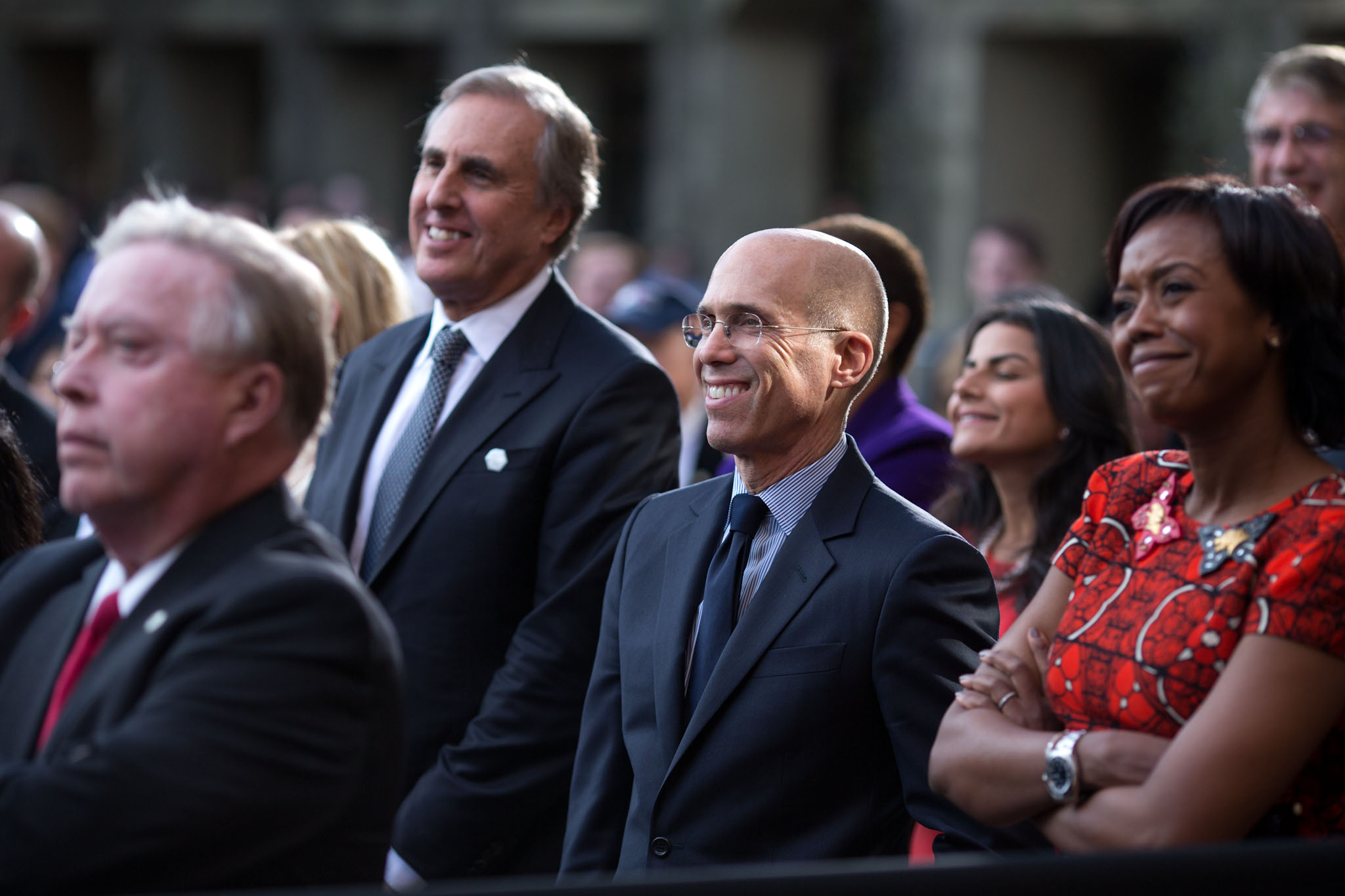 Jeffrey Katzenburg, third from left, listens with others as President Barack Obama delivers remarks on the economy to employees at the DreamWorks Animation SKG movie studio in Glendale, Calif., Nov. 26, 2013. Mellody Hobson is at right. (Official White House Photo by Pete Souza)

Even so, the President noted, we could likely have come even further if there were less dysfunction and obstruction in Washington.

We would be a lot further along if we could just get folks to act with some sense ... if we didn’t have one wing of one party that was a little less obsessed with repealing health care for 40 million people, more concerned with making sure the law works. If they hadn't spent 40 votes trying to repeal the Affordable Care Act, they might have actually taken some votes on rebuilding our infrastructure, or instituting early childhood education for young people across this country, or investing more money in basic research that helps to create the amazing technologies that many of you utilize. Any of the serious proposals I've put forward that would be creating jobs right now, they could have been taking votes on that.

And speaking of health care, the President noted that reform is currently at work in Southern California and across the country, noting that 350,000 Californians have already signed up.

Thanks in part to the Affordable Care Act, health care costs are growing at the slowest rate in 50 years. Employer-based health care costs are growing at about one-third the rate of a decade ago. And that means that if the studios here or your employers aren't having to spend as much on health care, they can hire more folks and reinvest more in the business, and come up with those cool technologies that -- I don’t exactly understand how they work, but were really neat to look at.

The President closed by reiterating his call for politicians in Washington to set politics aside in the name of passing laws that will make life for millions of Americans fundamentally better.

…We may have different ideas and different policies on how to do things, but that shouldn’t negate that that core vision is what we're fighting for, and we should be able to sit down together and to keep dreaming and keep working, and to make sure that the American Dream that's been described here in Southern California is sustained for generations to come.