December 2, 2013 at 1:55 PM ET by Wendy Spencer
Twitter Facebook Email
Summary:
Corporation for National and Community Service CEO Wendy Spencer shares how mayors are highlighting the impact of service across the country.

Last month in Seattle, I had the opportunity to join St. Paul Mayor Chris Coleman, President of the National League of Cities, and Mesa Mayor Scott Smith, President of the U.S. Conference of Mayors, to announce the second annual Mayors Day of Recognition for National Service, which will be on April 1, 2014. 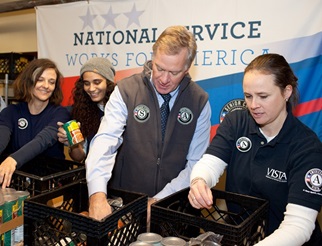 On that date, mayors across the country will participate in a national day of recognition to highlight the impact of national service in their cities and thank individuals who serve.

In 2013, 832 mayors representing nearly 100 million citizens participated in the inaugural effort, and we  hope for an even bigger turnout this year with the help of partners including Cities of Service, the National League of Cities, and others.

At the event in Seattle, the mayors shared how service helps their community. 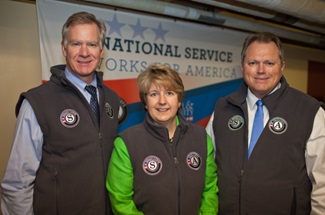 On hand to announce the 2014 Mayors Day of Recognition for National Service were NLC President and St. Paul, MN Mayor Chris Coleman, Corporation for National and Community Service CEO Wendy Spencer, and President of the U.S. Conference of Mayors and Mesa, AZ Mayor Scott Smith. (Photo courtesy of CNCS)

“Every day, in cities across the country, AmeriCorps and Senior Corps members are making a powerful difference through national service. These dedicated citizens are tackling tough challenges facing our communities – helping kids graduate, fighting poverty, making neighborhoods safer, and much more,” said Mayor Coleman. “I believe in the power of national service and encourage mayors and city officials across the country to join in recognizing the positive impact of AmeriCorps and Senior Corps in our cities.”

“The beauty of service is that those who serve don’t do it for the headlines or the recognition. They do it because they care, they want to make a difference.” said Mayor Smith. “Mayors Day of Recognition is a way to show our gratitude to AmeriCorps and Senior Corps members for making our communities better places to live.”

As the federal agency for service and volunteering, CNCS annually engages more than five million citizens in service at more than 70,000 sites in 8,500 cities across the country through AmeriCorps, Senior Corps, and other programs. The agency uses federal and private resources to support nonprofit groups, and a significant portion of this investment is focused on cities.   At the direction of President Obama in the recent Presidential Memorandum on Expanding National Service, we will be doing more in the coming year to use AmeriCorps and Senior Corps as a strategy to tackle some of our toughest challenges.

Mayors can participate in the April 1 recognition effort by visiting www.nationalservice.gov/mayorsforservice for more information.

Wendy Spencer is CEO of the Corporation for National and Community Service.