December 6, 2013 at 9:30 AM ET by Jason Furman
Twitter Facebook Email
Summary:
America’s resilient businesses have added jobs for 45 consecutive months, with private sector employment increasing by more than 8 million over that period. Total nonfarm payroll employment rose by 203,000 in November, with 196,000 of that increase in the private sector.

With solid job growth in November – in addition to strong data on manufacturing activity and auto sales – it is clear that the recovery continues to gain traction. Today’s report was yet another reminder of the resilience of America’s private sector following the disruptive government shutdown and debt limit brinksmanship in the first half of October. Nevertheless, today’s jobs numbers show that too many Americans who have been unemployed for 27 weeks or longer are still struggling to find jobs. That is why the President is calling on Congress to pass the extension of emergency unemployment insurance before it expires at the end of the year, just like they have always done when long-term unemployment remains elevated. The President also continues to work to increase overall growth while ensuring that growth is shared broadly in the form of higher wages and more mobility, which is why he is fighting for a minimum wage increase and expansion of educational opportunities.

1. America’s resilient businesses have added jobs for 45 consecutive months, with private sector employment increasing by more than 8 million over that period. Today we learned that total nonfarm payroll employment rose by 203,000 in November, with 196,000 of that increase in the private sector. Private sector job growth was revised up for September (to 168,000) and October (to 214,000) so that over the last three months, private employment has risen by an average of 193,000 per month. 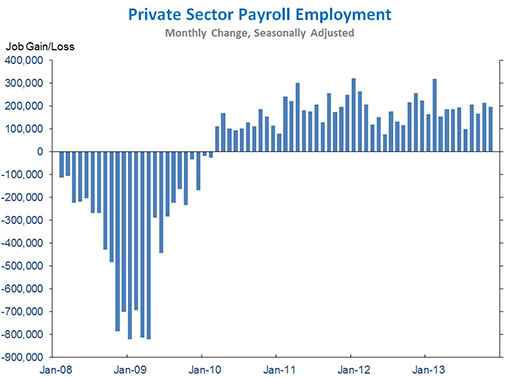 2. Real average hourly earnings for private production and nonsupervisory workers rose 1.4 percent in the twelve months ending in October, the largest increase since 2009, and today’s data on nominal wages in November suggest that this growth likely continued. These data signal that the recovery in the labor market continues to progress, but are also a reminder that more work remains to boost not only job creation but also earnings. The real wage growth observed in recent months reflects both low inflation and a pickup in nominal wage growth, which continued into November, when the average private sector production and nonsupervisory worker earned $20.31 per hour, up 2.2 percent relative to a year earlier (data on inflation and real wages in November will be available on December 17). Looking over a longer period, real average hourly earnings for production and nonsupervisory workers have risen on net only about 3 percent since 1979 – a period when labor productivity rose by more than 90 percent. These statistics underscore the importance of taking steps to ensure that even as our overall economy continues to strengthen, those striving to get into the middle class are not left behind. 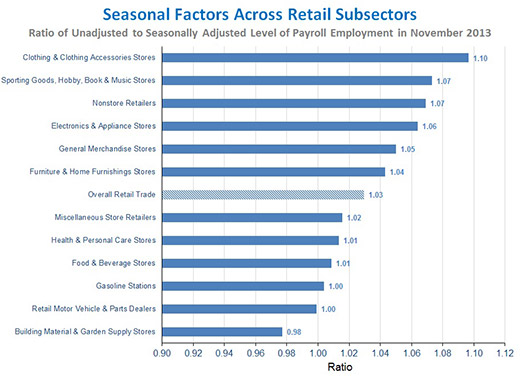 4. While still unacceptably high, the unemployment rate fell 0.3 percentage points to 7.0 percent, the lowest in five years, and the Bureau of Labor Statistics’ broadest alternative measure of labor underutilization also posted a notable decline. The “U-6” rate is the broadest alternative measure of labor underutilization because it includes the unemployed, persons working part-time for economic reasons, and those marginally attached to the labor force. This measure fell by 0.6 percentage point in November, the largest one-month drop on record (following a shutdown-related increase in October), and also reached its lowest level in five years. The concurrent improvement in the broadest official alternative measure of labor underutilization is another signal that the labor market is healing. The chart below shows that over time, these two series tend to move in the same direction, but that the U-6 is always substantially higher than the official unemployment rate in both recessions and recoveries. 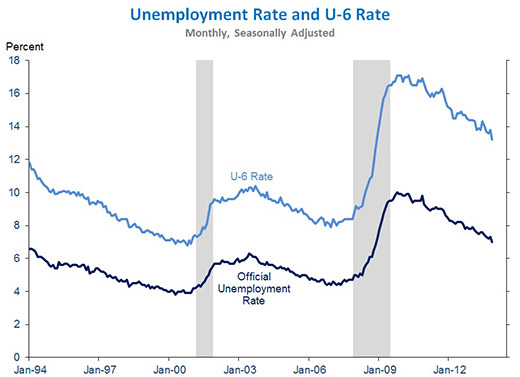 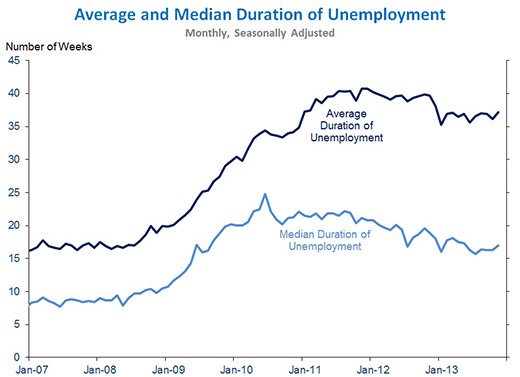