December 6, 2013 at 5:39 PM ET by Matt Nosanchuk
Twitter Facebook Email
Summary:
On Thursday, December 5, the President and Mrs. Obama welcomed members of the American Jewish community to the White House to celebrate Hanukkah.

On Thursday, December 5, the President and Mrs. Obama welcomed members of the American Jewish community to the White House to celebrate Hanukkah.  They hosted two receptions in the Grand Foyer of the White House.  Guests included leaders from a broad range of national and local Jewish organizations; Supreme Court Justices; Administration officials; Members of Congress; leaders from the religious community,  representing an array of denominations and organizations; athletes; actors; academics; musicians; authors; journalists; and other community stakeholders.  The U.S. Marine Band, America’s oldest continuously active professional music organization, known as “the President’s own,” performed in the East Room.

At both receptions, the food preparation occurred under the strict rabbinical supervision of Rabbi Levi Shemtov, Lubavitch Center of Washington (Chabad), in cooperation with the Rabbinical Council of Greater Washington.  Watch this remarkable still-camera video that captures the koshering of the White House kitchen.

At the afternoon reception, arriving guests were welcomed into the White House to the sounds of Zemer Chai (“living song”), a choir of 30 singers from the Washington, DC metropolitan area dedicated to sharing the rich and diverse musical heritage of the Jewish people. Founded in 1976, the choir sings the full range of the Jewish repertoire.

The President and Mrs. Obama joined guests for the ceremonial candlelighting program as the eighth day of Hanukkah was drawing to a close.  The President made remarks, recognizing the creators of “Thanksgivukkah” and the 10-year-old inventor of the “Menurkey,” created because of the intersection this year of Hanukkah and Thanksgiving.  He then invited a military chaplain, Rabbi Amanda Lurer to recite an appropriate blessing to remind the gathering and the world of the meaning of this holiday.  Rabbi Lurer serves in the U.S. Navy and recently returned from a nine-month deployment in the Eastern Mediterranean.

Following the blessing, Lainey and Kylie Schmitter, ages 8 and 4, respectively, lit the candles with a little help from their mom, Drew Schmitter.  A military family, Lainey’s and Kylie’s Dad, Jacob Schmitter, is a graduate of the U.S. Naval Academy currently on his fifth deployment to a forward operating base in Afghanistan. 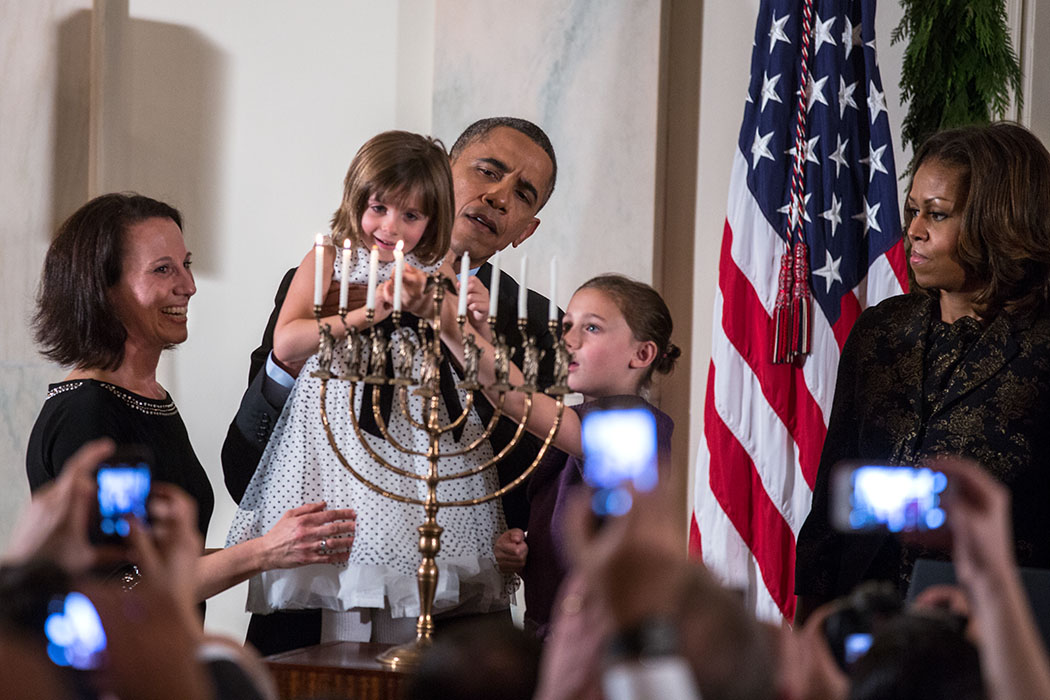 President Barack Obama holds up Kylie Schmitter as she and her sister Lainey Schmitter light the menorah during the Hanukkah reception in the Grand Foyer of the White House, Dec. 5, 2013. (Official White House Photo by Lawrence Jackson)

The Schmitters lit Manfred Anson’s Statue of Liberty Menorah, which pays tribute to the promise of America for Jews who have emigrated here to find new opportunity and, in many cases, rebuild their lives.  In 1986, to celebrate the centennial of the Statue of Liberty, Anson created the Statue of Liberty Menorah, taking the design of a century-old Polish seven-branched menorah and adapting it for Hanukkah.  He used a Statue of Liberty statuette for each branch of the menorah, transforming Lady Liberty’s torch of freedom into the candleholder for each night of Hanukkah and for the service candle.   Also, he inscribed important events in Jewish history – from the Exodus from Egypt to the Holocaust and the establishment of the State of Israel –onto the base of each statuette and crowned the menorah with the American bald eagle.  The Statue of Liberty Menorah being used this year at the White House was cast from the original mold in 2011 at the request of Dr. Aaron Feingold, who donated it to the National Museum of American Jewish History.

At the evening Hanukkah Reception, guests were treated to the sounds of Pizmon, the coed Jewish a cappella group of Columbia University, Barnard College, and The Jewish Theological Seminary of America.  Pizmon (Hebrew for the chorus of a song), performing Jewish music as a source of inspiration and community outreach, was founded in 1987 and is the first collegiate Jewish a cappella group.

The President and Mrs. Obama joined guests in the Grand Foyer for remarks and a candlelighting program.  On a serious note, President Obama noted the passing, a few hours earlier, of former South African President Nelson Mandela.  He spoke of Hanukkah as “a story of miracles, of a light that burned for eight days when it should have only lasted for one and a people who surmounted overwhelming odds to reclaim their historic homeland, so they could live their lives in peace and practice their religion in peace.”

The President then invited Rabbi Joshua Sherwin, a military chaplain who serves as the rabbi at the U.S. Naval Academy in Annapolis, to offer an appropriate blessing to remind the gathering and the world of the meaning of this holiday.  The candles on a special menorah brought from the Jewish Museum in Prague were lit by two Holocaust survivors from the former Czechoslovakia, Margit Meissner and Martin Weiss, from Bethesda, Maryland.  Both are volunteers at the U.S. Holocaust Memorial Museum in Washington. 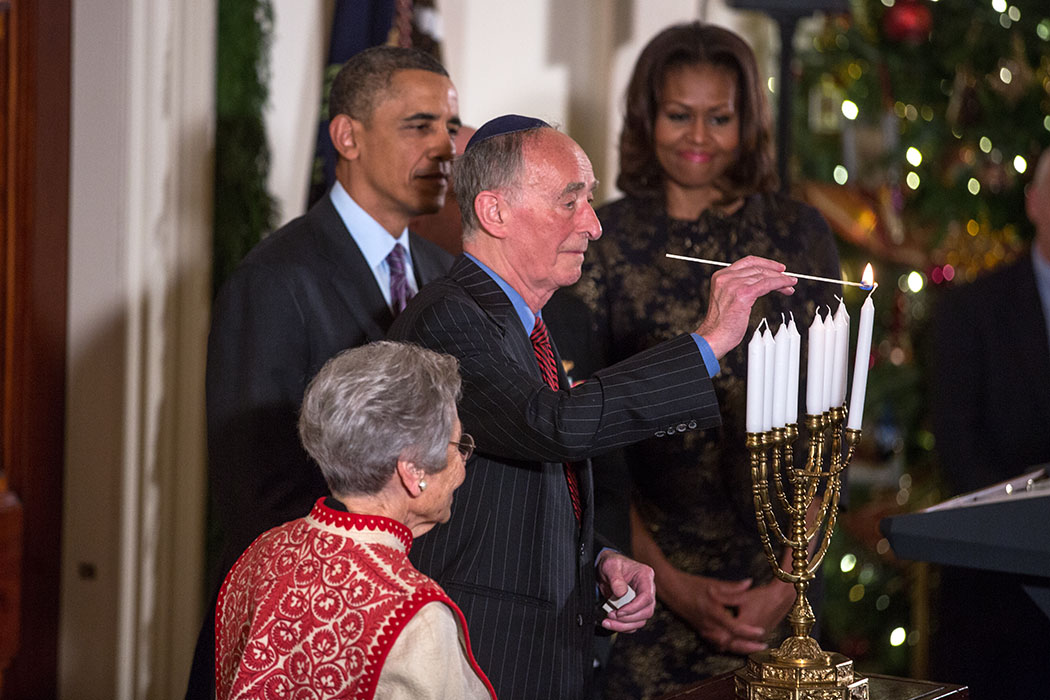 The nineteenth-century brass menorah used at the evening reception – and the fate of the couple who owned it – illuminates the turbulent history of the Jewish community in Bohemia and Moravia during the first half of the twentieth century and the ultimate triumph of good over evil.  In 1922, Abraham Isaac and Hayyah Ettinger, a husband and wife who lived in the Czech town of Hrušov, donated the 19th century brass menorah to the local prayer hall.  They are named in the Hebrew inscription engraved on the menorah’s base:

The menorah was used in the prayer hall until the Nazis burned it down on the night of June 11, 1939, and demolished the rest of the building during the following winter.  On November 23, 1939, after the annexation of the Czechoslovak border area (the Sudetenland), the Nazis expelled the Ettingers and their three children and deported them to Poland.  The Ettingers were murdered by the Nazis in an unknown place in 1943.

Today, the menorah has been used to celebrate Hanukkah at the U.S. Ambassador’s Residence in Prague, a mansion that was built by a Jewish family in the 1920s and seized by the Nazis and used as a headquarters for their leaders during the German occupation.