January 6, 2014 at 4:00 PM ET by Jeanne Lambrew
Twitter Facebook Email
Summary:
For years, health care costs in America skyrocketed, with brutal consequences for our country. The Affordable Care Act, for the first time in decades, has helped to stop that trend.

For years, health care costs in America skyrocketed, with brutal consequences for our country. Escalating costs hurt our economy, eating into workers’ wages and holding back hiring.  They contributed to our deficits, and crowded out crucial investments like education and maintaining a world-class infrastructure.  And they've taken money directly out of consumers' pockets, with Americans paying far higher health care prices than others around the world for no better outcomes.

The Affordable Care Act, for the first time in decades, has helped to stop that trend.

New data released today by the Office of the Actuary at the Centers for Medicare & Medicaid Services today shows that national health expenditures grew by just 3.7 percent in 2012.  That means that the years 2009 to 2012 saw the slowest growth in U.S. health care expenditures since the government started collecting this information in the 1960s. 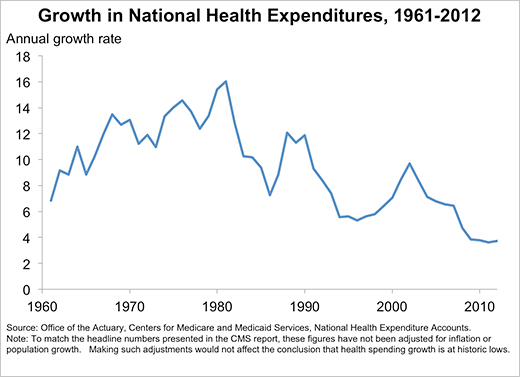 This slow growth coupled with the rebound in the economy resulted in health spending as a share of gross domestic product (GDP) declining to 17.2 percent, the third consecutive year that health spending has held steady or declined as a share of the economy.  Stated simply, health spending stabilized over the past four years so it no longer took an increasing bite out of the economy. As recently described in a report issued by the President’s Council of Economic Advisers (CEA), slow growth in health care spending has been seen across major payer categories and types of care.

Today’s new report shows that these trends were borne out in the final data for 2012.  The report shows low spending growth per enrollee in 2012 for Medicare (0.7 percent), Medicaid (1.3 percent), and private health insurance premiums (2.7 percent).  By comparison, over the ten years preceding the recent slowdown (1999 to 2008), those per-enrollee spending growth figures were 7.4 percent for Medicare, 2.8 percent for Medicaid, and 7.4 percent for private health insurance.  Slowing private premium cost growth by over 60 percent means real savings for workers, their families, and employers.

Additionally, medical price inflation as measured by the Office of the Actuary slowed from already low levels, decreasing from 2.4 percent in 2011 to 1.7 percent in 2012.  According to the CEA report, health care price inflation measured using price data from the Bureau of Economic Analysis (which are available further back in time) is at its lowest level in 50 years. 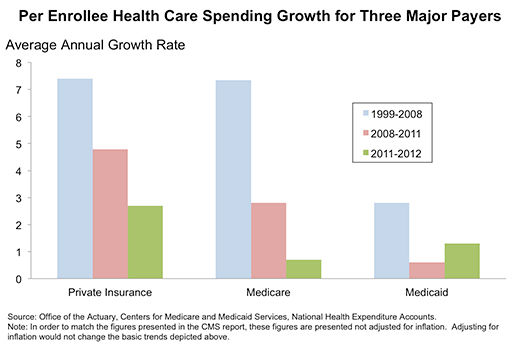 The Affordable Care Act was designed to contribute to and sustain slow growth in health spending in this nation.  The law prioritized improving the efficiency of the health care system, creating opportunities for doctors and hospitals to deliver high quality care at lower total cost.  For example, the Affordable Care Act’s policies to discourage readmissions and manage care transitions have contributed to 130,000 fewer readmissions to hospitals for Medicare beneficiaries from January 2012 through August 2013.  Fewer readmissions mean lower costs for Medicare and seniors and better care as well.  The law is also reducing wasteful overpayments to medical providers and insurers through Medicare.

We have already seen powerful examples of hospitals and other providers who have already begun to embrace changes to their practices to bring down costs in the wake of the Affordable Care Act, prioritizing results over just the amount of treatment a patient receives. 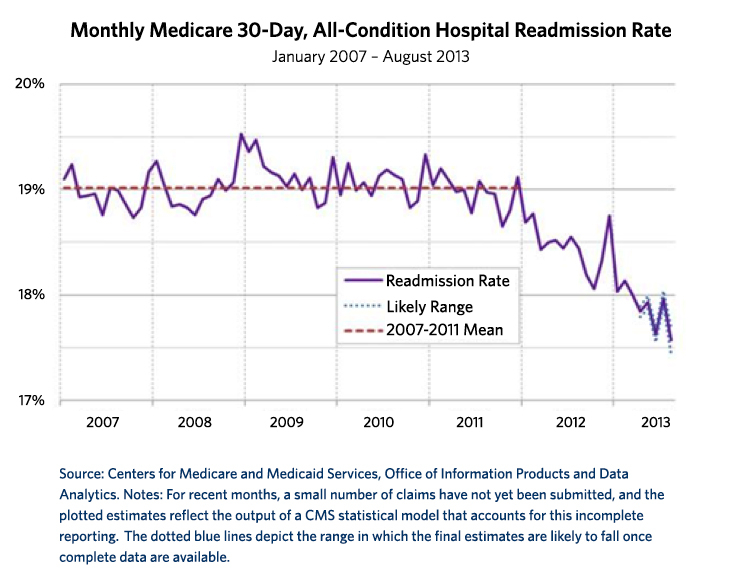 While there is a debate about how much the Affordable Care Act has contributed to this health cost slow-down, there is no doubt that it reduced Medicare spending growth, and most experts believe that Medicare savings spill over into the private sector.  And it is a fact that health care prices have grown at record-low rates – and are less affected by recessions and cost sharing than health care utilization is.  In addition, the Affordable Care Act’s requirement that insurance companies spend at least 80 percent of premium dollars on care for patients, not overhead and profits, led to estimated savings of $5 billion over the past two years.  And, the review of premium increases of 10 percent or more helped 6.8 million Americans save an estimated $1.2 billion in 2012 after their insurers cut back on planned increases as a result of this process.

The slowdown in the rise of health care costs, thanks in part to the Affordable Care Act, has already begun to pay dividends in the form of savings for American consumers, lower costs for businesses, and our rapidly declining deficits. This work will continue in 2014 as we bring millions more into the health insurance system.  No longer can individuals be denied coverage because of a pre-existing condition or charged more because they are women.  As coverage becomes accessible, we will continue to work to make sure these encouraging trends continue to bring down health care costs for our economy, businesses and consumers.