January 10, 2014 at 9:40 AM ET by Jason Furman
Twitter Facebook Email
Summary:
America’s resilient businesses have added jobs for 46 consecutive months, with private sector employment increasing by 8.2 million over that period. Today we learned that total nonfarm payroll employment rose by 74,000 in December, due to an 87,000 increase in private employment.

As our economy continues to make progress, there's a lot more work to do. Though December’s job growth was less than expected, we continue to focus on the longer-term trend in the economy - 2.2 million private sector jobs added and a 1.2 percentage point decline in the unemployment rate over the course of 2013. Today’s numbers are also a reminder of the work that remains, especially on one of our nation’s most immediate and pressing challenges: long-term unemployment. Despite an abundance of evidence indicating that this challenge is far from solved, Congress allowed extended unemployment insurance to lapse at the end of 2013, cutting off a critical lifeline to those who lost a job through no fault of their own and are still searching for work. Several of the charts below—and the updated Council of Economic Advisers report available here—explain why today’s jobs numbers show that while we are making progress, extended unemployment insurance benefits remain necessary and should be the first order of business in 2014.

1. America’s resilient businesses have added jobs for 46 consecutive months, with private sector employment increasing by 8.2 million over that period. Today we learned that total nonfarm payroll employment rose by 74,000 in December, due to an 87,000 increase in private employment. Private sector job growth was revised up for October (to 217,000) and November (to 226,000) so that over the last three months, private employment has risen by an average of 177,000 per month. Policymakers should be doing everything they can to speed job creation. The Council of Economic Advisers estimates that extending the Emergency Unemployment Compensation (EUC) program through 2014 would lead to an additional 240,000 jobs over the course of the year, because the benefits sustain the purchasing power of recipients who support local businesses and their suppliers. This projection is similar to the central estimate released by the Congressional Budget Office. 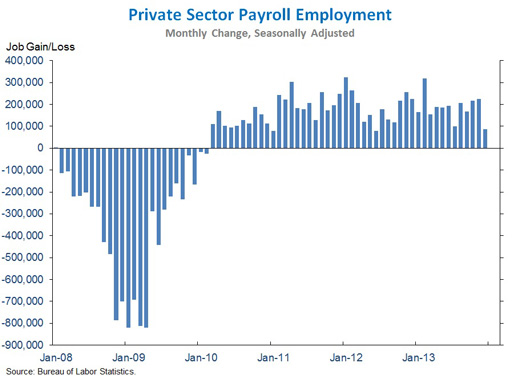 2. The overall unemployment rate declined to 6.7 percent in December, the lowest since October 2008, but the lingering elevation in the unemployment rate is due to the large number of persons unemployed for more than 27 weeks. Persons unemployed for 26 weeks or less represent 4.1 percent of the labor force, in line with the average during the 2001-2007 expansion period (4.2 percent). In contrast, although long-term unemployment has been falling steadily as the economic recovery continues, the long-term unemployment rate is still two-and-a-half times what it was during the 2000s expansion (2.5 percent in December 2013 vs. 1.0 percent on average before the recession). This suggests that it is important to continue to bring down the unemployment rate while supporting people who are still struggling to find jobs. 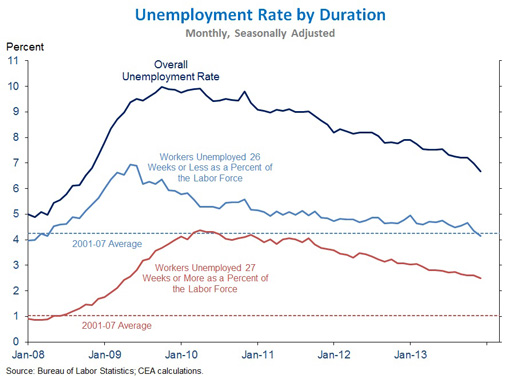 3. With the expiration of the EUC program at the end of December, the share of the unemployed receiving jobless benefits is likely to fall to the lowest on record. On average during the twelve months ended November 2013 (the latest data available), 26 percent of unemployed workers received jobless benefits through regular programs, compared to 36 percent on average from 1986 to the beginning of the Great Recession in December 2007. The EUC program provided benefits to 14 percent of the unemployed over the twelve months ended November 2013. Crucially, the EUC program is already phasing down naturally—the share of the unemployed receiving EUC benefits was more than 35 percent at its peak Moreover, there are 2.8 job seekers for every job opening (as of October 2013) – a huge improvement from the high of 6.7 in 2009 but still above the average of 2.1 in the previous expansion. However, now is not the time to abruptly remove such a widely-used lifeline and make an unprecedented cut to support for the unemployed. 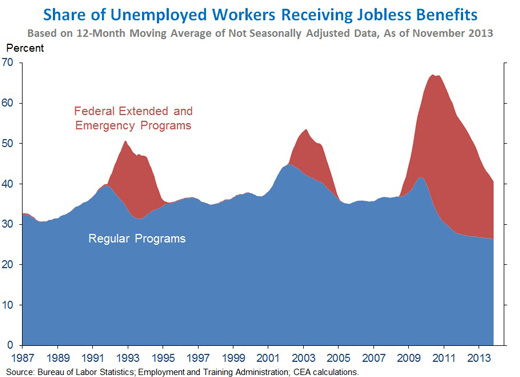 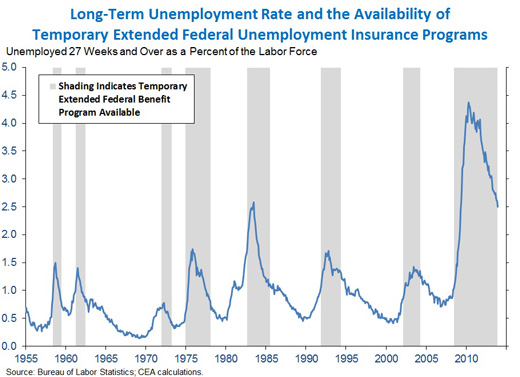