January 23, 2014 at 1:10 PM ET by Cristin Dorgelo
Twitter Facebook Email
Summary:
Today, Harvard University’s Ash Center for Democratic Governance and Innovation announced Challenge.gov as winner of the prestigious 2013 “Innovations in American Government Award” in honor of exemplary service and creativity in the public interest, further highlighting our excitement about the innovations being unleashed by public prizes and challenges. 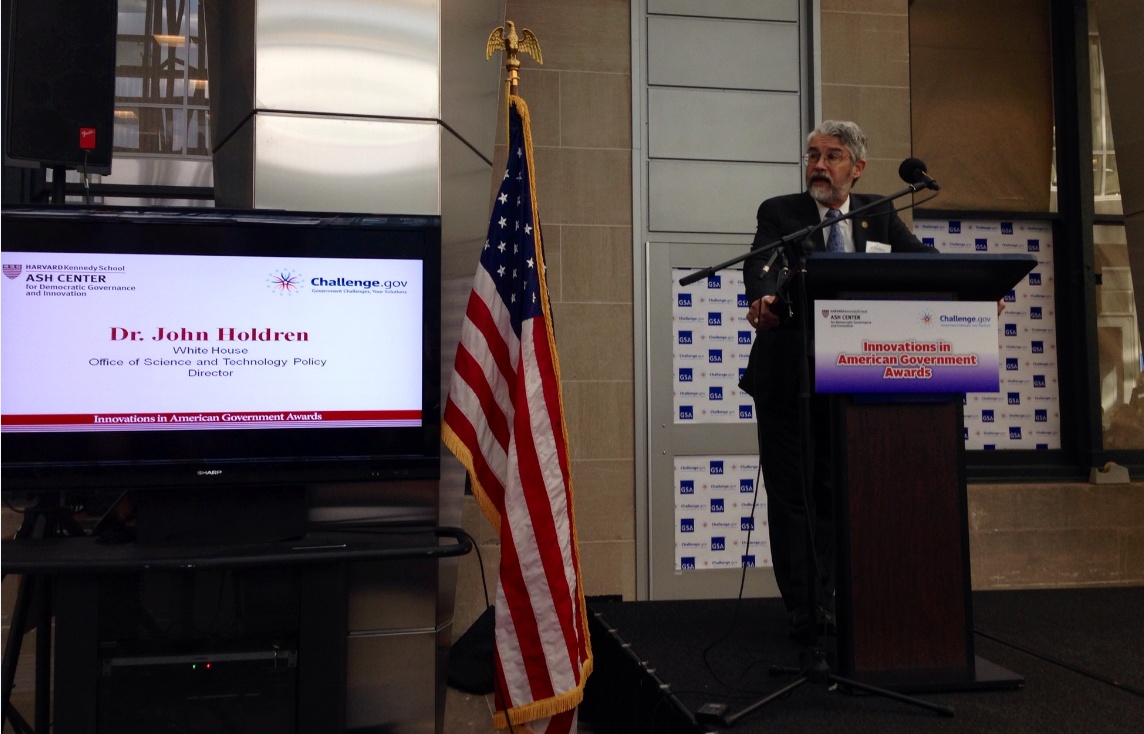 OSTP Director John P. Holdren congratulated the General Services Administration's Challenge.gov team for its selection as recipient of the Innovations in American Government Award from the Ash Center for Democratic Governance and Innovation at the John F. Kennedy School of Government at Harvard University on January 23, 2014, in Washington, DC. (Photo by Cristin Dorgelo)

Today, Harvard University’s Ash Center for Democratic Governance and Innovation announced Challenge.gov as winner of the prestigious 2013 “Innovations in American Government Award” in honor of exemplary service and creativity in the public interest.

This award further highlights our excitement about the innovations being unleashed by public prizes and challenges, and the value of these solutions being developed by citizen solvers to address tough problems.

Since its launch in September 2010 by the General Services Administration (GSA), Challenge.gov has become a one-stop shop where entrepreneurs and citizen solvers can find public-sector prize competitions. The website has been used by nearly 60 Federal agencies to source solutions to over 300 incentive prizes and challenges and to engage more than 42,000 citizen solvers.

In celebration of the award, stakeholders from across the Federal Government as well as the nonprofit and private sectors, gathered at GSA headquarters in Washington, DC, this morning for a ceremony which featured remarks from OSTP Director John P. Holdren, GSA Administrator Tangherlini, Harvard University’s Stephen Goldsmith, and Innovation Awards committee member Kathleen Kennedy Townsend. The ceremony also showcased examples of innovative citizen-developed solutions, including a display featuring a flexible astronaut glove designed by an entrepreneur in response to a challenge from NASA in 2009—along with a host of other prize-winning gadgets.

A few of the prizes hosted to date on Challenge.gov include:

We look forward to agencies continuing to seek new ways to use prizes as tools to advance their missions and to help solve the grand challenges facing society.

Congratulations on today’s award to the Challenge.gov team, all of the Federal agencies who have offered prizes and challenges on Challenge.gov since its launch, and to the tens of thousands of citizen solvers who have participated to date.  Let’s keep up the good work!

In December, OSTP released its second annual comprehensive report detailing benefits reaped from the increasing use of prizes and competitions by Federal agencies.  You can learn more about the prize competitions being run across the Federal Government by visiting Challenge.gov and watching the highlights video below.