President Obama Travels the Country to Promote Opportunity for All

January 30, 2014 at 8:46 PM ET by David Hudson
Twitter Facebook Email
Summary:
The President traveled around the country to discuss the four parts of the opportunity agenda he put forward in this year's State of the Union: 1) creating more new jobs; 2) training Americans with the skills to fill those jobs; 3) guaranteeing every child access to a world-class education; and 4) making sure hard work pays off. 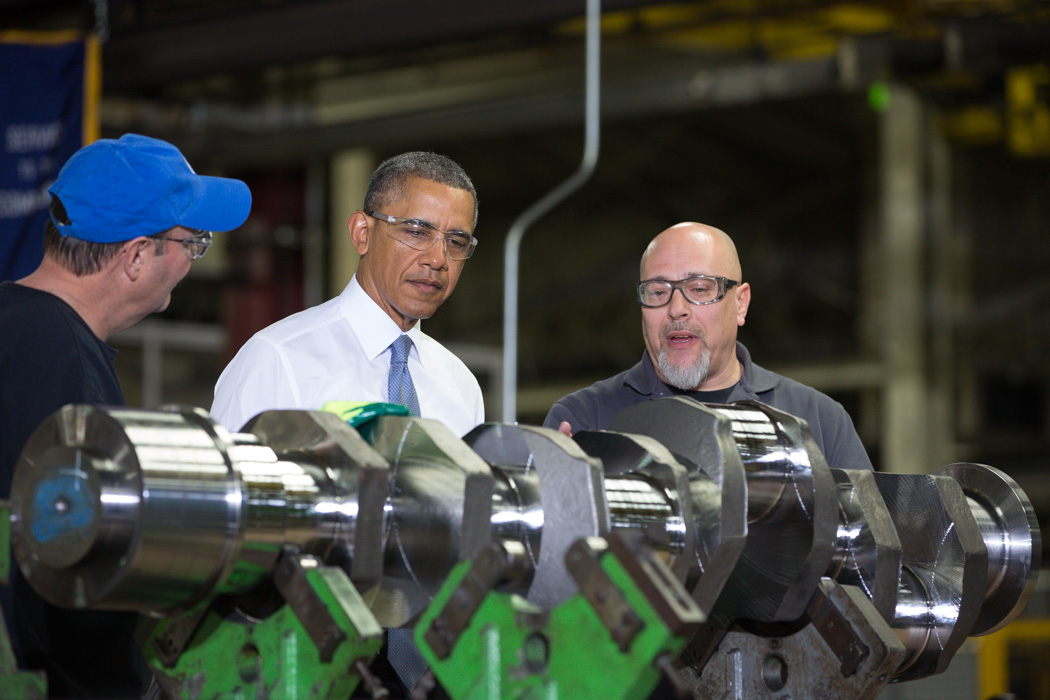 Following his fifth State of the Union address Tuesday night, President Obama is traveling around the country to talk more about the importance of opportunity for all.

Earlier today, President Obama visited a General Electric gas engines facility in Waukesha, Wisconsin and McGavock High School in Nashville. At both stops, he detailed the four parts of the opportunity agenda he put forward in Tuesday’s address: 1) create more new jobs; 2) train Americans with the skills to fill those jobs; 3) guarantee every child access to a world-class education; and 4) make sure hard work pays off.

At the GE facility, the President discussed the rebounding of the U.S. manufacturing sector -- which is adding jobs again for the first time since the 1990s -- and job growth at the facility itself. “The manufacturing that’s taking place here,” he said, “isn’t just good for this plant. It has spillover effects throughout the economy. And what’s also true is … that manufacturing jobs typically pay well. We want to encourage more of them.” He also highlighted Wisconsin’s youth and adult apprenticeship programs, which are giving residents the skills they need to fill new jobs.

And, to make sure our nation's job training programs are focused on helping Americans who are ready to work attain the skills they need for good jobs in high-demand industries like manufacturing, President Obama announced that the Vice President and other government officials will lead a thorough review of federal job training programs:

... we're going to review all of [the] federal job training programs, soup to nuts. And then we're also going to be supporting local ones. I've asked Vice President Biden and top officials in the federal government to reach out to governors, mayors, business leaders, labor leaders, Democratic and Republican members of Congress -- let's find what programs are working best and let's duplicate them and expand them.

And later this year, I'm going to ask Tom Perez, my Secretary of Labor, to apply those lessons as we conduct the next round of a national competition we're going to set up, challenging community colleges to partner with local employers and national industries to design job-driven training programs. And we're going to have at least one winner from every state. And we’re going to invest nearly $500 million in the partnerships that show the most potential. So we're putting some real money behind this.

Learn more about the steps President Obama is taking to help train workers with skills for in-demand jobs.

At McGavock High School, the President focused on educational opportunity. He first discussed the significance of investing in high-quality pre-kindergarten -- an investment that produces a $7 return for every $1 invested. The President also highlighted his ConnectED initiative -- his plan to connect 99% of U.S. students to high-speed broadband over the next five years. The FCC is assisting with the initiative, helping to connect more than 15,000 schools and 20 million students to high-speed Internet over the next two years.

Yesterday, President Obama traveled to a Costco in Lanham, Maryland. After touring the facility, the President spoke about Costco's leadership in employee pay: “Profitable corporations like Costco see higher wages as a smart way to boost productivity and to reduce turnover. So entry-level employees here -- stock associates, cashiers -- start out at $11.50 an hour.” He later visited a U.S. Steel plant in West Mifflin, Pennsylvania to talk more about making hard work pay off for every single American.

The idea of opportunity is an integral part of the American fabric. In the President’s own words, “It means that no matter who you are, no matter what you look like, no matter where you come from, if you work hard, if you live up to your responsibilities, you can make it in America.”