February 2, 2014 at 12:09 PM ET by Danielle Carnival
Twitter Facebook Email
Summary:
The Obama Administration is taking steps to ensure that the Nation’s STEM workforce is equipped with the education and skills to discover, create, and invent. And the Federal Government isn’t acting alone.Ahead of Super Bowl Sunday, OSTP caught up with New York Giants wide-receiver Victor Cruz, who is harnessing his football fame to highlight the importance of STEM education.

President Obama has stressed time and again that the health and longevity of America’s economy and environment depends in large part on the acceleration of the kinds of innovations that lead to new breakthrough technologies, inspire new industries, and safeguard our communities.

In his State of the Union Address just last week, the President said:

“We know that the nation that goes all-in on innovation today will own the global economy tomorrow.  This is an edge America cannot surrender.”

That’s why the Obama Administration is taking steps to ensure that the Nation’s science, technology, engineering, and mathematics (STEM) workforce is equipped with the education and skills to discover, create, and invent. And the Federal Government isn’t acting alone. Partners in the private sector, non-profit organizations, philanthropies, colleges and universities, and in State and local governments are stepping up across the country to do their part—by developing mentorship programs, leading extra-curricular activities, and contributing their time, resources, and talents to help get kids inspired and engaged in all things STEM.

Ahead of Super Bowl Sunday, I had a chance to catch up with one such partner, who is harnessing his football fame to highlight the importance of STEM education: New York Giants wide-receiver Victor Cruz.  Here’s what he had to say:

Q:  To some, STEM and the Super Bowl might be a surprising pairing – what’s the link?

Victor Cruz:  This Super Bowl weekend, I’m taking the opportunity to shine a spotlight on something important to me as a player and as a parent – making sure our young people reach their full potential. In an increasingly competitive global job market where the majority of the fastest growing professions require math and science skills, this means taking an interest in STEM.

Q:  Why is getting kids excited about STEM subjects a priority for you and why do you think it’s so important for sports role models like yourself to get involved?

Cruz: I recognize that professional athletes like me have a role to play in this effort – as the faces of sports kids are passionate about, we can help them make the connection between their favorite pastimes and the subjects they’re learning in school. After all, football isn’t just about running, catching and (if you’re me) salsa dancing. It’s a game of physics and geometry. I know personally that knowledge of these subjects is important, both on the field and off.   That’s why I support the President’s Educate to Innovate initiative to move American students from the middle to the top of the pack in science and math achievement over the next decade.

Last year, I was thrilled to attend the third ever White House Science Fair to meet some impressive scientists and engineers, most of whom are not yet old enough to drive.  At this event, President Obama celebrates the remarkable achievements of student science fair winners and extraordinary kid innovators from across the nation, just like he will this year’s Super Bowl champions!  These kids were applying all they had learned in STEM subjects to solve problems in the world around them and were having some fun in the process.

Q:  How else are you getting involved?

Cruz:  I’m putting this passion into action in lots of ways, including joining with Connect a Million Minds (CAMM), Time Warner Cable’s commitment through Educate to Innovate to inspire the next generation of problem solvers by getting young people excited about STEM. Just this weekend, I joined 300 kids from local Boys and Girls Clubs, including my home Club from Paterson, NJ, at Time Warner Cable Studios in New York City for CAMM Day, where we all took part in fun hands-on STEM activities related to our favorite TV shows and networks.

One of my favorite activities was the “egg drop” from ESPN. We tested our physics and engineering skills by wrapping an egg in different types of protective sports gear and launching it from above to see which piece of gear protected it best. Now the egg knows what I go through on the field!

Q:  What advice do you have for kids and adults who are looking to get more hands on with STEM?

Cruz: I’d invite them to join me as I join the President in doing my part to ignite young people’s interest in these important subjects through the things they love. For those who love sports, like me, there are downloadable activities parents can do with their kids and lots of cool videos and other resources that are available online. The great thing about STEM is that it can apply to just about anything, and I’d encourage everyone to find ways to incorporate STEM into whatever hobbies or activities they like to do—whether it’s sports, or cooking, or comic books. 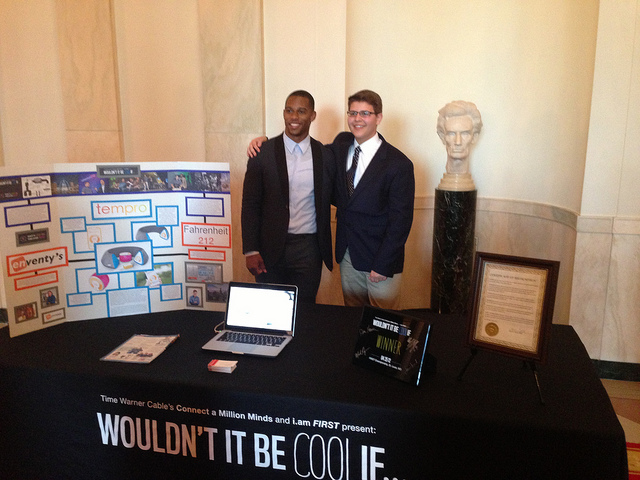