This week has seen the release of a Congressional Budget Office (CBO) analysis that refuted claims by opponents of the Affordable Care Act (ACA) that it is a “job killer” and demonstrated that, by giving families more options for obtaining affordable health insurance outside the workplace, the ACA will make it easier for people take a risk and start a business, take time out of the labor force to raise a family, or retire when they are ready.

As CBO made clear, however, its analysis was not a comprehensive analysis of how the ACA will affect the labor market in particular or the economy as a whole. This blog post illustrates six ways that the ACA is helping the labor market, laying the foundation for future economic growth, and improving families’ financial security and well-being.

1.Putting more money in families’ pockets, boosting demand, and bringing down unemployment today. As of January 1, more than 2 million people had selected a plan in the health insurance marketplace, and nearly 80 percent of those people will – thanks to the ACA – benefit from tax credits to help pay their premiums. All told, the Congressional Budget Office estimates that over the entirety of 2014, 5 million people will benefit from premium tax credits and help with cost-sharing averaging $4,700 per person.  In 2015, 11 million people are estimated to benefit, rising to 19 million in 2016. Many millions more will gain affordable health insurance coverage through Medicaid.

These provisions of the ACA make it easier for families to access health care services and to meet other pressing needs, which will increase the demand for goods and services throughout the economy at a time when the unemployment rate is still elevated. For this reason, as CBO Director Doug Elmendorf testified, the ACA “spurs employment and would reduce unemployment over the next few years.” The ACA is thus – today – helping ensure that every American who wants a job can find one. 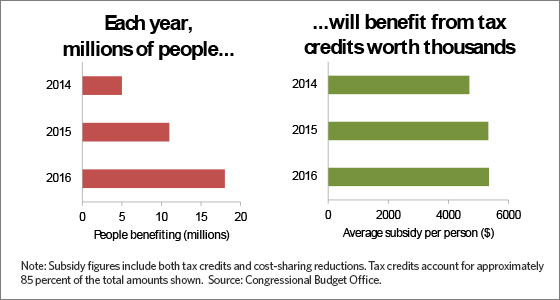 2. Helping slow the growth of health care costs, boosting hiring in the near term, and bolstering workers’ paychecks. The United States is currently experiencing a historic slowdown in the growth of health care costs. From 2010 to 2012 real per-capita health spending grew at an average annual rate of just 1.1 percent, and preliminary data and projections imply that this slow growth continued in 2013. The spending growth rates recorded over the last few years are the slowest on record, and less than one-third the long-term historical average of 4.6 percent that stretches back to 1960.

As documented in a report by the Council of Economic Advisers, the ACA is contributing to these trends through reforms to Medicare that reduce excessive payments to medical providers and private insurers and by deploying innovative new payment models that incentivize more efficient, higher-quality care. A growing body of evidence suggests that, in addition to reducing costs and improving quality in Medicare, these ACA reforms may be generating similar benefits system-wide.

Slower growth in health care costs reduces the growth of the health insurance premiums paid by employers, which has important benefits for workers. In the short run, lower health insurance premiums reduce the cost of hiring an additional worker, making it easier for employers to add jobs. One study co-authored by a leading health economist found that reductions in health care cost growth due to health care reform could increase job growth by 250,000 to 400,000 per year by the second half of this decade.

Economic research shows that, over time, an increasingly large fraction of the premium savings are passed on to workers in the form of higher wages. If only one-third of the recent slowdown in health care cost growth persists, the savings after a decade will amount to $1,200 per person, much of which will show up in worker’s paychecks as higher wages. 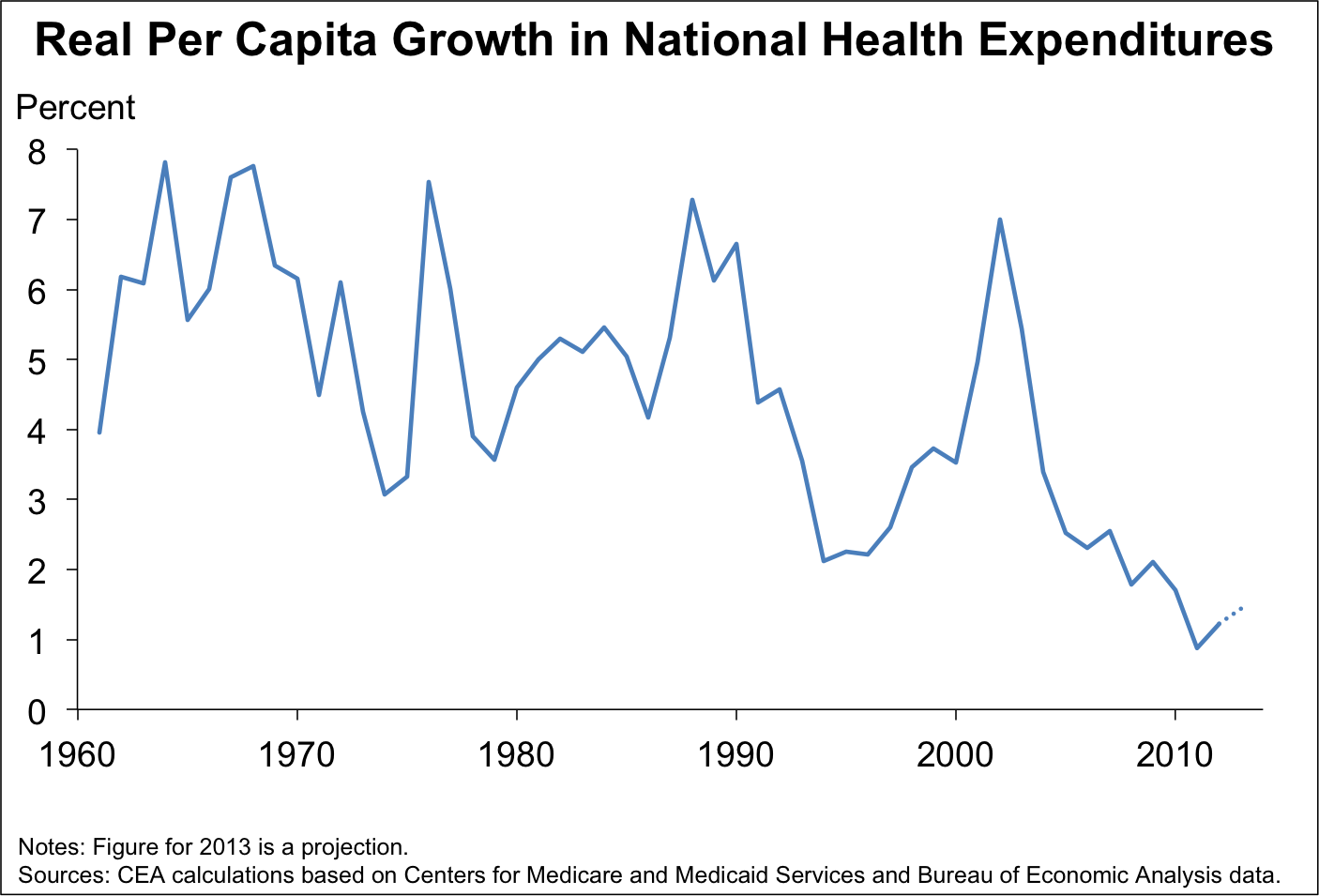 3. Reducing our long-term deficit and laying the foundation for future growth. The Congressional Budget Office (CBO) has estimated that over fiscal years 2013 through 2022, the ACA will reduce the deficit by $109 billion. The ACA’s deficit-reducing effects will grow over time. CBO estimates that over the decade from 2023 through 2032, the ACA will reduce the deficit by an average of 0.5 percent of GDP each year, corresponding to total deficit reduction of nearly $1.6 trillion over that ten-year period. Lower long-term deficits due to the ACA will mean higher national saving, which will increase capital accumulation and reduce foreign borrowing, thereby making workers more productive and increasing national income and living standards over time. 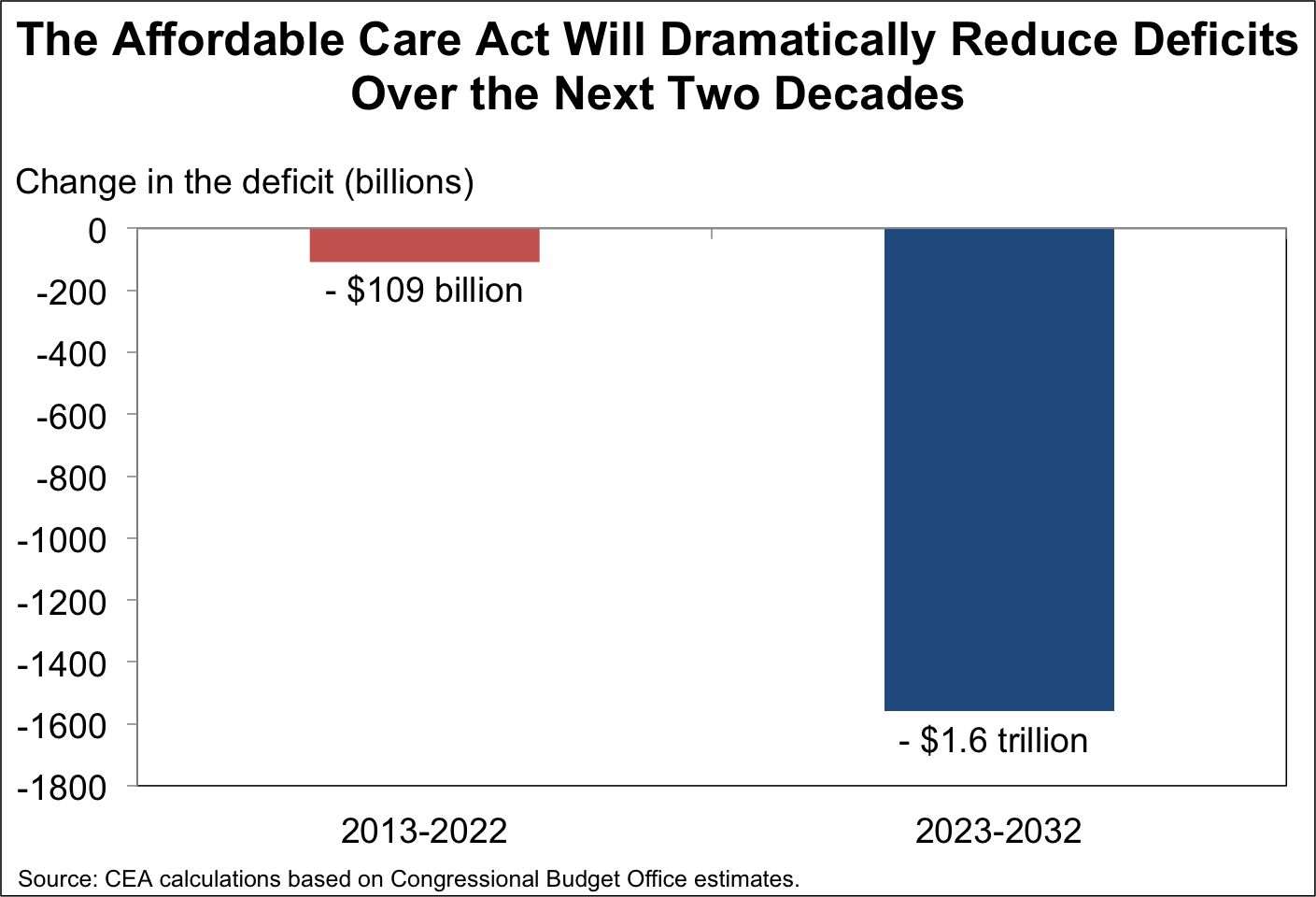 By expanding coverage, the ACA will expand access to needed medical care. Greater access to care as a result of being insured has been shown to reduce mortality, improve mental health, and improve self-reported health status. For Americans who had coverage before the ACA, the ACA guarantees access to preventive services recommended by the United States Preventive Services Task Force without cost-sharing, services that have been proven to improve health and save lives. Since 2010, more than 71 million Americans have received at least one preventive service without cost-sharing.

In addition, the ACA is helping to improve the quality and efficiency of care for all Americans, contributing to better health outcomes while reducing costs. One striking example comes from an ACA initiative that gives hospitals incentives to reduce the number of patients returning to the hospital after discharge, such as by ensuring higher-quality care during the initial hospital stay or making appropriate arrangements for where patients will receive care after discharge. Medicare has also funded community-based organizations that help patients move more smoothly from a hospital stay to care at home. Hospitals have responded to these programs, and, over the last three years, Medicare 30-day hospital readmission rates have turned sharply lower, and are now more than a percentage point below their average level from 2007 to 2011. Through August 2013, this decline corresponded to 130,000 avoided hospital readmissions.

People who live longer, healthier lives will miss fewer days of work, are less likely to become disabled, will tend to spend more years in the workforce, and will be more productive while on the job. 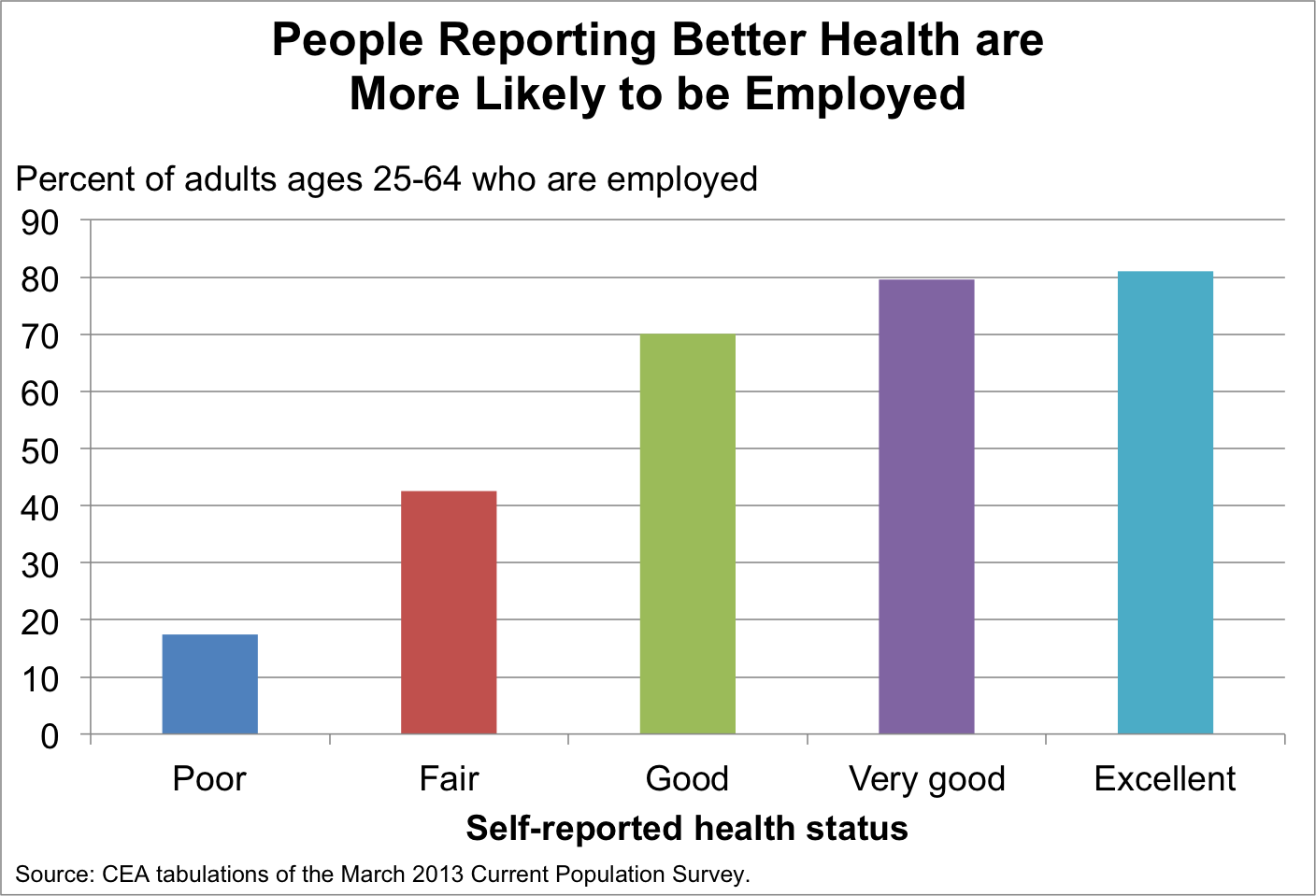 5. Reducing “job lock” and encouraging job mobility and entrepreneurship. Before the ACA, many Americans’ only source of secure health insurance coverage was through their jobs. For people with pre-existing medical conditions, purchasing coverage on their own was often unaffordable or even impossible since insurance companies could simply refuse to provide coverage. For others, buying coverage on their own meant living with the fear that their insurer would raise their premiums without warning or even cancel their policy altogether. This could have the effect of locking workers into jobs. As economists at the Heritage Foundation wrote before passage of the ACA: “Individuals who wish to take a better job, change careers, or leave the workforce to raise a family or to retire early take substantial risks…This health insurance obstacle to labor mobility is sometimes called ‘job lock.’”

Because of the ACA’s ban on discrimination against people with pre-existing conditions and its other strong consumer protections, all Americans now have secure access to health insurance, whether or not they can get coverage through their workplaces.

This guarantee of access to health insurance has a variety of economic benefits. Access to health insurance outside the workplace allows people to structure their careers in ways that make sense for them, like by taking time off to raise a family or by retiring when they want to. It also allows people to take risks that further their careers and benefit the economy as a whole, like going part-time in order to go back to school, leaving a job in order to start a business, or moving to a better job, perhaps at an employer that does not offer coverage. While the empirical evidence on the magnitude of these types of responses is incomplete (and in some cases mixed), there is no doubt that job lock presents an economic challenge. By increasing workers’ mobility across jobs, secure access to health insurance helps them to find the job that is best for them—and thus increases overall wages and productivity. Moreover, reducing job lock encourages entrepreneurship, a critical ingredient for growth and job creation. 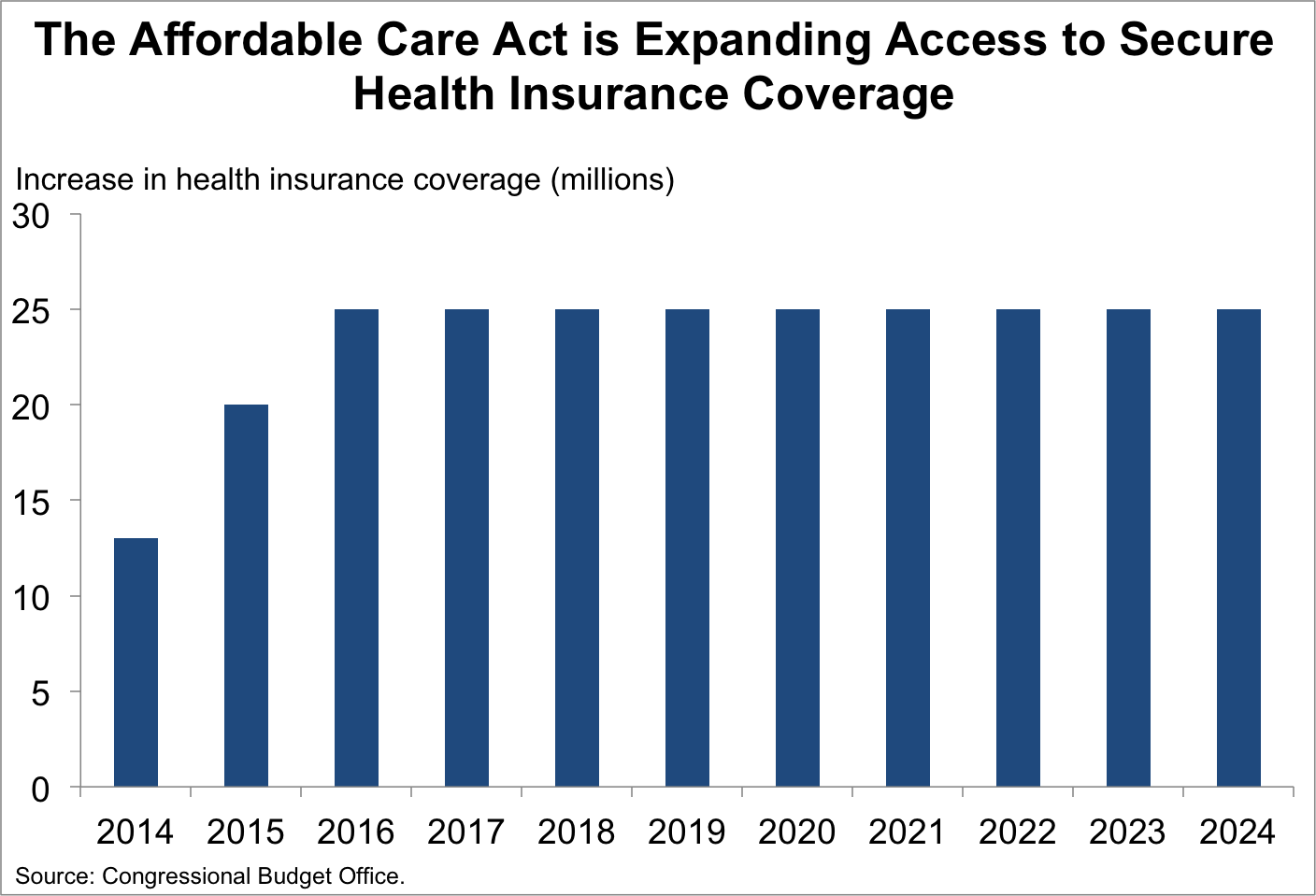 6. Improving financial security in the face of illness. By expanding access to affordable health insurance coverage, the ACA is helping to ensure that getting sick no longer means financial ruin. Recent research examining an expansion of Medicaid coverage in the State of Oregon confirmed the important role that having insurance plays in ensuring financial security. The study, which used a “gold standard” randomized research design found that gaining access to health insurance coverage through Medicaid “almost completely eliminated” catastrophic medical costs (defined as medical costs in excess of 30 percent of income).

In addition to expanding coverage, the ACA is improving financial security for families who have coverage today. Because of the ACA, all insurance plans sold in the United States must cap enrollees’ annual out-of-pocket spending, and insurance companies can no longer sell low-quality policies with annual or lifetime limits on coverage. The ACA is also improving financial security for seniors by phasing out the Medicare Part D “donut hole.” Since the enactment of the ACA, these provisions saved 7.3 million Medicare beneficiaries an average of about $1,200 per person on prescription drugs. Overall, better financial protection makes an essential contribution to the well-being of families and thus the overall health of the economy. 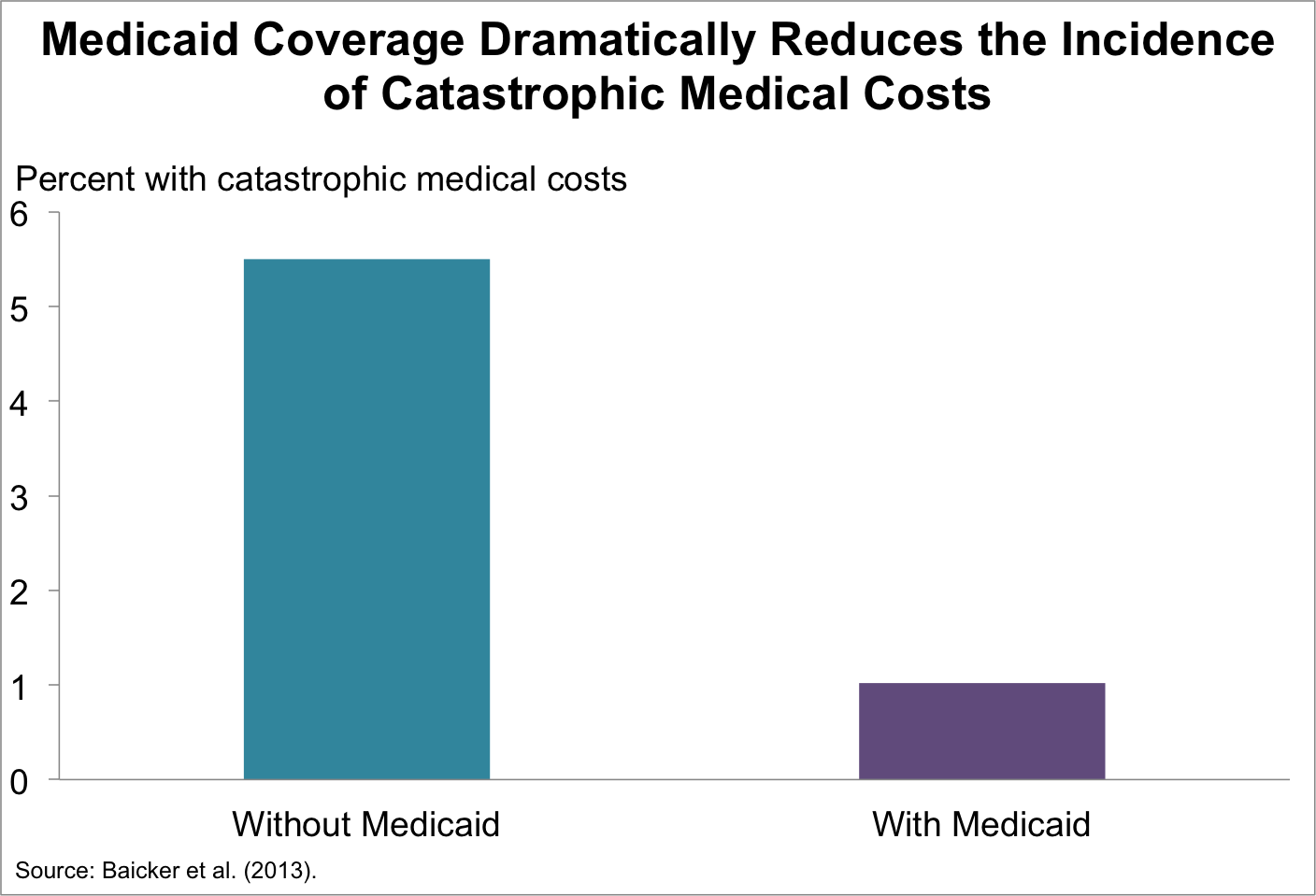