New Additions to the Oval Office

February 10, 2014 at 7:11 PM ET by William G. Allman
Twitter Facebook Email
Summary:
Two paintings by Edward Hopper, widely recognized as one of the most significant artists of the 20th century, were hung in the Oval Office on Friday, February 7, 2014.

Two paintings by Edward Hopper (1882–1967), widely recognized as one of the most significant artists of the 20th century, were hung in the Oval Office on Friday, February 7, 2014. Cobb’s Barns, South Truro, and Burly Cobb’s House, South Truro -- oil on canvas works painted in 1930-33 on Cape Cod -- have been lent by the Whitney Museum of American Art in New York, the world’s largest repository of Hopper’s works.

Before building a house on Cape Cod in 1934, Hopper and his wife rented a hillside cottage for four summers. From that house, Hopper executed a series of paintings and drawings of the buildings on their landlord’s farm below, exploring the structures from several angles and at different times of the day.

Emblematic examples of his work, the two paintings lent by the Whitney Museum capture the strong sense of atmosphere and light as well as the empty stillness that characterize much of Hopper’s imagery. They also demonstrate Hopper’s fascination with the various forms of this country’s vernacular architecture -- a subject he would return to again and again, resulting in some of the most enduring images of American art. 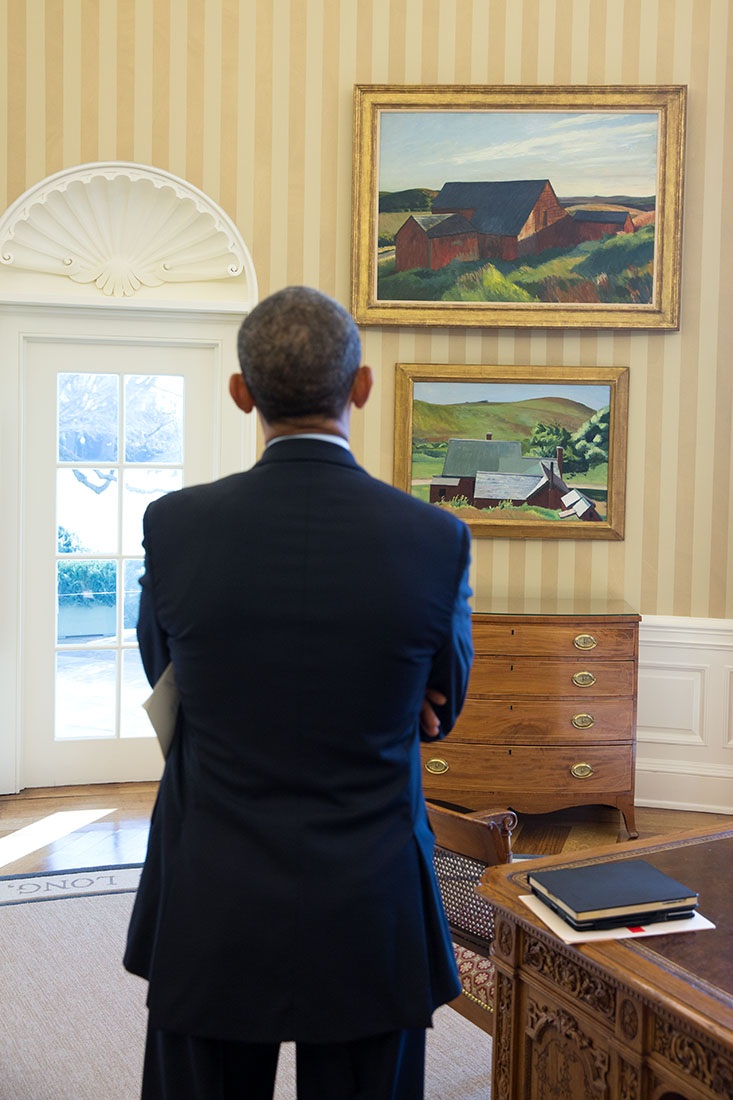 The Hopper paintings, hung one over the other at the southeast side of the room, add to the breadth of American paintings represented in the Oval Office today:

George Washington by Rembrandt Peale, c.1823
Abraham Lincoln by George Henry Story, c.1915 (from life studies painted in 1861)
The Three Tetons by Thomas Moran, 1895
The Avenue in the Rain by Childe Hassam, 1917
Statue of Liberty by Norman Rockwell, 1946

All five of these works belong to the permanent White House collection, which does not include any works by Edward Hopper. Another notable change to the items hanging in the Oval Office is the removal of a rare printed copy of the Emancipation Proclamation signed by President Abraham Lincoln. As a document on paper, it needed prolonged rest from further exposure to light. As a loan to the White House, its preservation required its removal.

* Information about Hopper and Cobb’s Barns, South Truro, and Burly Cobb’s House, South Truro was provided by the Whitney Museum of American Art.