February 18, 2014 at 3:24 PM ET by Jason Furman and Betsey Stevenson
Twitter Facebook Email
Summary:
A new CBO report finds that 16.5 million workers would get a raise from increasing the minimum wage to $10.10 per hour, helping millions of hard-working families, reducing poverty, and increasing the overall wages going to lower-income households. 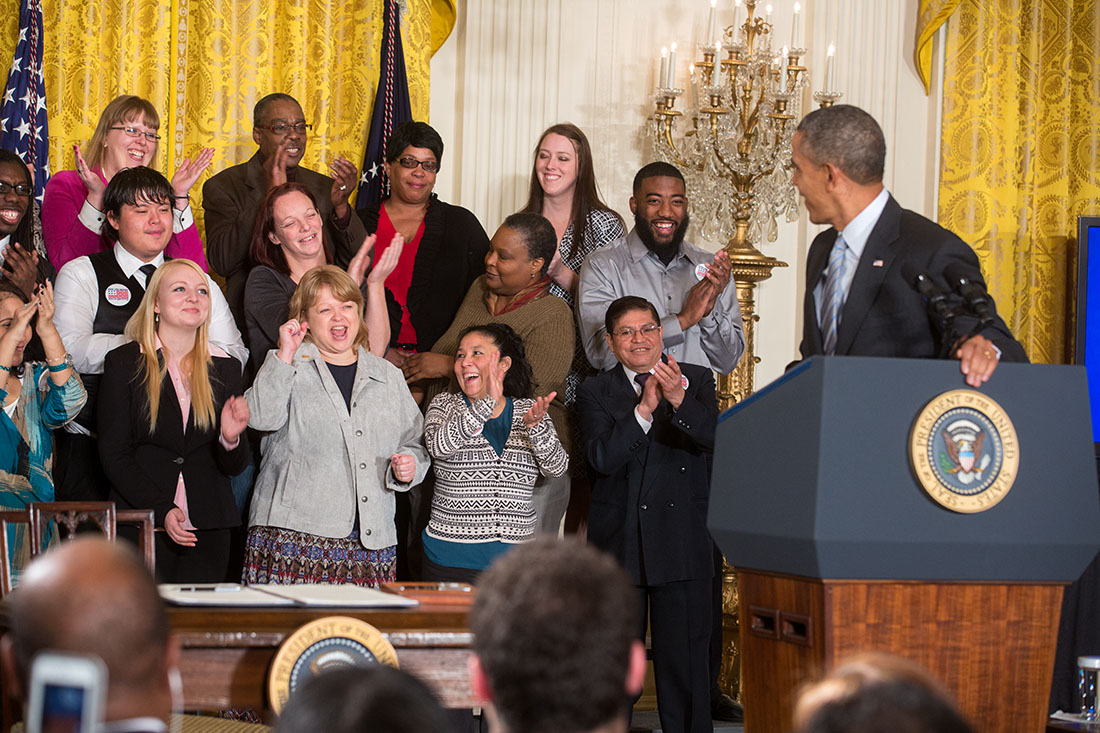 President Barack Obama delivers remarks on the importance of raising the federal minimum wage for all workers, during an event in the East Room of the White House, Feb. 12, 2014. (Official White House Photo by Chuck Kennedy)

The new Congressional Budget Office (CBO) report finds that 16.5 million workers would get a raise from increasing the minimum wage to $10.10 per hour and this would help millions of hard-working families, reduce poverty, and increase the overall wages going to lower-income households.

On employment, CBO’s central estimate is that raising the minimum wage to $10.10 per hour would lead to a 0.3 percent decrease in employment and CBO acknowledges that the employment impact could be essentially zero. But even these estimates do not reflect the overall consensus view of economists which is that raising the minimum wage has little or no negative effect on employment.  For example, seven Nobel Prize winners and more than 600 other economists recently stated that: “In recent years there have been important developments in the academic literature on the effect of increases in the minimum wage on employment, with the weight of evidence now showing that increases in the minimum wage have had little or no negative effect on the employment of minimum-wage workers, even during times of weakness in the labor market.”

The following are six key points from the latest CBO report. For more information, last week the Council of Economic Advisers (CEA) released a summary of the economic case for raising the minimum wage.

1. CBO finds that raising the minimum wage to $10.10 per hour would directly benefit 16.5 million workers. According to today’s CBO report, 16.5 million people making less than $10.10 per hour would get a raise if the minimum wage is increased. This figure does not include CBO’s estimate of as many as 8.0 million workers who currently earn just above $10.10 an hour but could also potentially see a raise due to the “ripple effect” of a shifting wage structure.

This finding is consistent with the fact that 62 percent of expert economists polled by the University of Chicago Booth School of Business agreed that the benefits of raising the minimum wage outweigh any potential costs, as compared to only 16 percent who disagreed.

3. CBO finds that this wage increase would help the economy today. Specifically CBO finds that the extra purchasing power for workers will expand aggregate demand and strengthen the economy today. As CBO wrote, “Raising the minimum wage increases that demand, in CBO’s assessment, because the families that experience increases in income tend to raise their consumption more than the families that experience decreases in income tend to reduce their consumption. In the short term, that increase in demand raises the nation’s output and income slightly.”

This finding is consistent with other research. For example, a study released by economists at the Federal Reserve Bank of Chicago found that raising the minimum wage to $9 per hour would raise growth by 0.3 percentage point in the short run.

6. CBO’s estimates of the impact of raising the minimum wage on employment does not reflect the current consensus view of economists. The bulk of academic studies, have concluded that the effects on employment of minimum wage increases in the range now under consideration are likely to be small to nonexistent. CBO also agrees that the employment effect could be essentially zero, but their central estimates are not reflective of a consensus of the economics profession. Specifically:

Overall the logic for the finding that raising the minimum wage does not result in large adverse impacts on employment is that paying workers a better wage can improve productivity and thereby reduce unit labor costs. These adjustments, along with others that firms can make, help explain why the increase in the minimum wage need not lead to a reduction in employment. Higher wages lead to lower turnover, reducing the amount employers must spend recruiting and training new employees. Paying workers more can also improve motivation, morale, focus, and health, all of which can make workers more productive. In addition, by reducing absenteeism, higher wages can increase the productivity of coworkers who depend on each other or work in teams. In addition, businesses can adjust in other ways rather than reducing employment (for example, by accepting lower profit margins).  CBO’s estimates do not appear to fully reflect the increased emphasis on all of these factors from the recent economics literature.