Responding to the Situation in Ukraine

February 20, 2014 at 7:05 PM ET by Megan Slack
Twitter Facebook Email
Summary:
Get information on the Obama administration's response to the situation in Ukraine.

Today, President Obama updated the American people on the situation in Ukraine and the steps the United States is taking in response. Watch his remarks below or on YouTube.

Today, in the White House Press Briefing Room, President Obama announced new measures intended to send a strong message to the Russian government that there are consequences for their actions that violate the sovereignty and territorial integrity of Ukraine, including their actions supporting the illegal referendum for Crimean separation.

Today, President Obama spoke with President Putin of Russia. According to a readout of the call, President Obama emphasized that the Crimean “referendum,” which violates the Ukrainian constitution and occurred under duress of Russian military intervention, would never be recognized by the United States and the international community."

See the full readout here, and a statement from the Press Secretary on today's referendum here.

Today, President Obama held a bilateral meeting with Prime Minister Arseniy Yatsenyuk of Ukraine. Below, watch remarks from both leaders following the meeting, or read them here.

This afternoon, President Obama delivered a statement from the White House Press Briefing Room on efforts to address the ongoing crisis in Ukraine. Watch the statement here. Later, he spoke by phone with President Putin of Russia. On the call, President Obama emphasized that Russia's actions are in violation of Ukraine’s sovereignty and territorial integrity. See a readout from the call here.

As a statement issued from the White House Press Secretary earlier today explained, the United States is pursuing and reviewing a wide range of options in response to Russia’s actions.

Pursuant to the President’s guidance, today the State Department is putting in place visa restrictions on a number of officials and individuals, reflecting a policy decision to deny visas to those responsible for or complicit in threatening the sovereignty and territorial integrity of Ukraine. In addition, the President has signed an Executive Order that authorizes sanctions on individuals and entities responsible for activities undermining democratic processes or institutions in Ukraine; threatening the peace, security, stability, sovereignty, or territorial integrity of Ukraine; contributing to the misappropriation of state assets of Ukraine; or purporting to assert governmental authority over any part of Ukraine without authorization from the Ukrainian government in Kyiv. 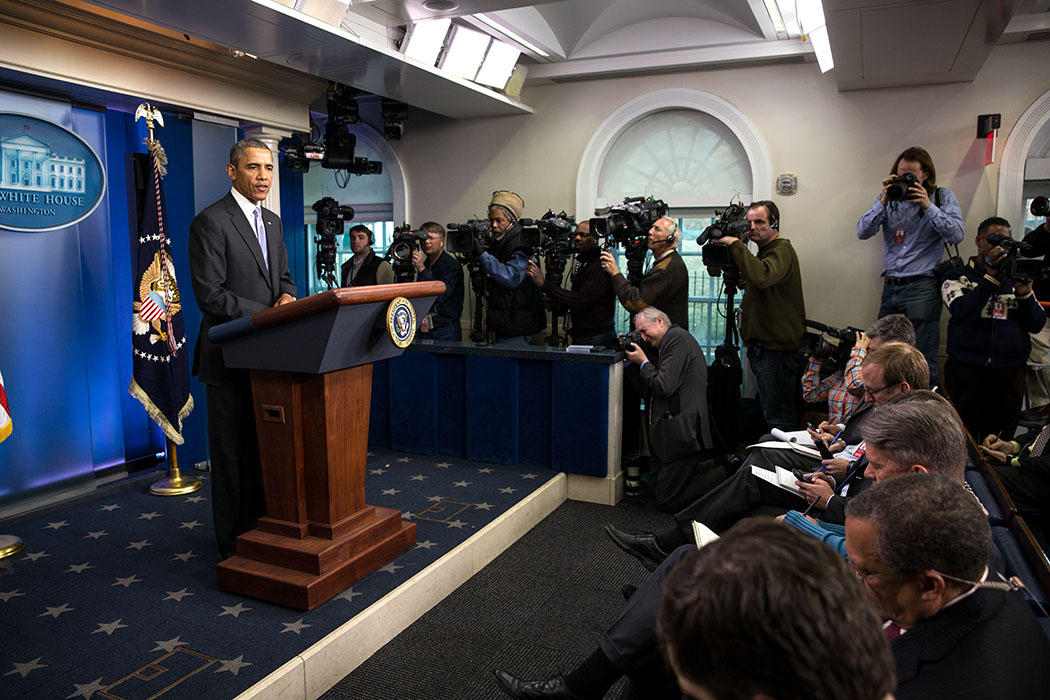 President Obama delivered a statement on the ongoing situation in Ukraine. Read the full statement here.

The latest statement from White House Press Secretary Jay Carney says that "the United States strongly supports Ukrainian leaders’ ongoing work to form an inclusive, multiparty government to represent all the people of Ukraine as they prepare for May elections, and to restore order, stability, and unity to the country."

As the process moves forward, the United States again calls on all parties in Ukraine and in the region to support reconciliation and the country’s return to political and economic health, and will work with the international community in building an economic assistance package based upon Ukraine’s achievements in crafting a unity government. An inclusive, broad-based government committed to reconciliation and to economic reform is the necessary foundation for international assistance.

The White House Press Secretary released a statement on the latest developments in Ukraine, highlighting the constructive work done in Ukraine's parliament, and former Prime Minister Yulia Tymoshenko's release from a prison hospital:

The United States is closely monitoring developments in Ukraine. We have consistently advocated a de-escalation of violence, constitutional change, a coalition government, and early elections, and today’s developments could move us closer to that goal. The unshakeable principle guiding events must be that the people of Ukraine determine their own future.

The White House Press Secretary released a statement on the agreement signed today between Ukrainian President Yanukovych and Opposition leaders:

The United States welcomes the agreement signed today between Ukrainian President Yanukovych and Opposition leaders. The agreement, facilitated by Foreign Ministers Fabius, Sikorski, and Steinmeier and witnessed by Russia, is consistent with what we have advocated in calling for a de-escalation of the violence, constitutional change, a coalition government, and early elections.

Today, President Obama spoke by phone with Chancellor Merkel of Germany to consult on the situation in Ukraine. The two leaders agreed it is critical that the United States, Germany and the European Union continue to stay in close touch in the days ahead on steps we can take to support an end to the violence and a political solution that is in the best interests of the Ukrainian people.

Before a bilateral meeting yesterday with President Peña Nieto of Mexico, President Obama said that "the United States condemns in strongest terms the violence that's taking place" in Ukraine. "And we have been deeply engaged with our European partners as well as both the Ukrainian government and the opposition to try to assure that that violence ends," he said.

But we hold the Ukrainian government primarily responsible for making sure that it is dealing with peaceful protesters in an appropriate way; that the Ukrainian people are able to assemble and speak freely about their interests without fear of repression.

And I want to be very clear that as we work through these next several days in Ukraine that we are going to be watching very carefully and we expect the Ukrainian government to show restraint, to not resort to violence in dealing with peaceful protesters.  We've said that we also expect peaceful protesters to remain peaceful.  And we'll be monitoring very carefully the situation, recognizing, along with our European partners and the international community, there will be consequences if people step over the line.  And that includes making sure that the Ukrainian military does not step into what should be a set of issues that can be resolved by civilians.

So the United States will continue to engage with all sides in the dispute in Ukraine, and ultimately our interest is to make sure that the Ukrainian people can express their own desires.  And we believe that a large majority of Ukrainians are interested in an integration with Europe, and the commerce and cultural exchanges that are possible for them to expand opportunity and prosperity.

But regardless of how the Ukrainian people determine their own future, it is important that it is the people themselves that make those decisions.  And that’s what the United States will continue to strive to achieve.

And I do think there is still the possibility of a peaceful transition within Ukraine, but it’s going to require the government, in particular, to actively seek that peaceful transition, and it requires the opposition and those on the streets to recognize that violence is not going to be the path by which this issue will be resolved.

Check back at whitehouse.gov/ukraine for updates and more information as it is released.

More information on the Obama administration's response to the situation in Ukraine: