February 20, 2014 at 1:15 PM ET by Marc Aidinoff
Twitter Facebook Email
Summary:
At America’s Central Port in Granite City, Illinois, the Vice President outlined how Recovery Act grants at the port and across the country have modernized the way we do business, created good-paying middle-class jobs, and strengthened our global economic competitiveness. 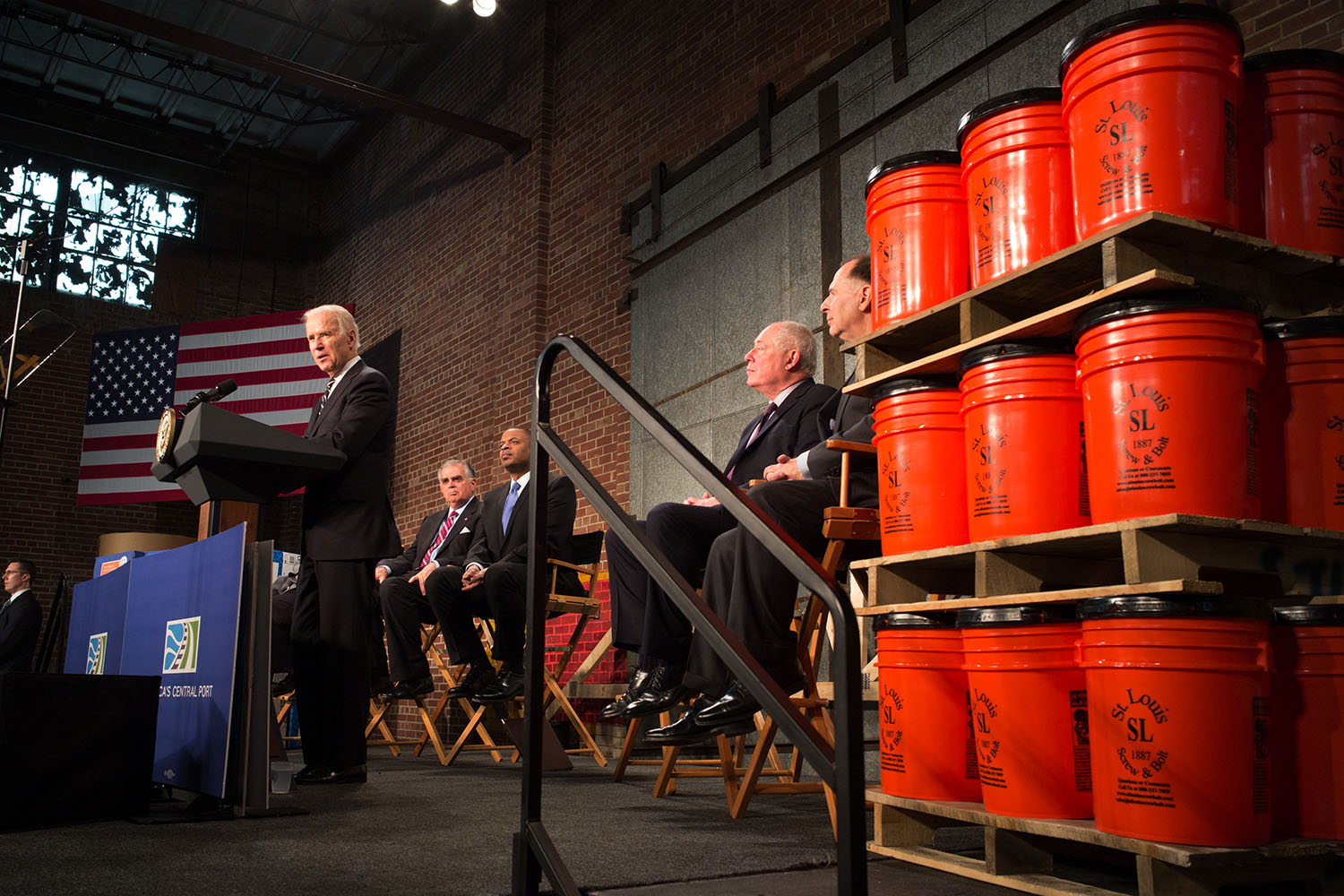 “The Recovery Act is the largest public works project since President Eisenhower laid out our nation’s interstate highway system—and all of you here at America’s Central Port are continuing this American story of boldness and doing big things that are so deeply ingrained in our history,” Vice President Biden said at an event marking the fifth anniversary of the American Recovery and Reinvestment Act, which saved our country from an economic depression and helped rebuild the middle class.

Speaking on the Mississippi River at America’s Central Port in Granite City, Illinois on Wednesday. February 19, the Vice President outlined how the Recovery Act’s TIGER grants at the port and across the country have modernized the way we do business, created good-paying middle-class jobs, and strengthened our global economic competitiveness.

Joined by Illinois Governor Pat Quinn, former Secretary of Transportation Ray LaHood, current Secretary of Transportation Anthony Foxx, along with local and port officials, the Vice President described how the grants significantly improve the way we finance and strengthen the capacity of our nation’s ports, railroads, and highways. At America’s third largest inland port, the TIGER program has already helped hire workers who installed new levee relief wells, laid down a new rail track, and started work on a new harbor, all of which help increase the Port’s efficiency and reduce shipping costs.

And these grants have leveraged significant state and private sector investments—since the federal investment more than a dozen businesses have moved to the port and invested more than $300 million in the area. The Vice President noted that from 2009-2013, the more than $3 billion invested in federal TIGER grants across the country leveraged an additional $13.6 billion from state and local governments and took private investment off the sidelines.

Overall, the Recovery Act and other Administration investments have improved more than 350,000 miles of roads, 6,000 miles of rail, and 20,000 bridges since 2009—generating millions of dollars of economic activity that support and create middle-class jobs across the country.

From the first National Road and the Erie Canal to the Intercontinental Railroad and the interstate highways, the Vice President reminded Americans that the best way to predict our future is to create it. That it is America’s enduring commitment to ingenuity and capability-- a continued and relentless effort to expand and modernize—that has made us the greatest economic power in the world.

The Vice President closed by saying, “Build—build the most modern infrastructure in the world, and the world will come to us,” reminding us that Recovery Act and its subsequent infrastructure investments have generated the kind of economic growth and dynamism that built our country and built our middle class—and will continue to do so.