February 28, 2014 at 2:41 PM ET by Valerie Jarrett
Twitter Facebook Email
Summary:
Representative Shirley Chisholm of New York will be forever remembered for the ground she broke in Congress, and the ground she laid for millions of women, girls, and African Americans in this country. 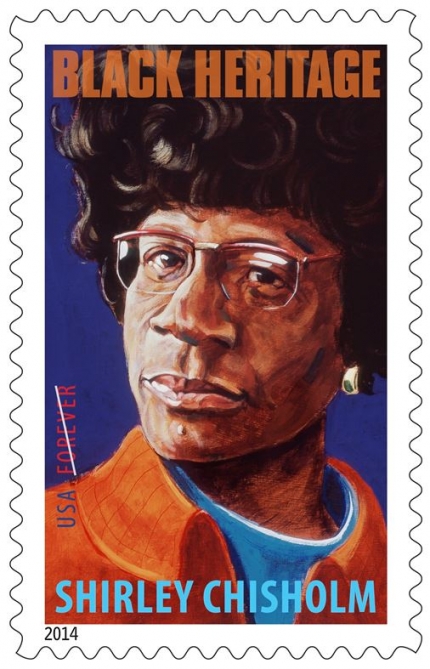 “I don't measure America by its achievement but by its potential.” – Shirley Chisolm, in her book, “Unbought and Unbossed”

With her slight build, distinctly precise diction, and relentless energy, Representative Shirley Chisholm of New York will be forever remembered for the ground she broke in Congress, and the ground she laid for millions of women, girls, and African Americans in this country.

In honor of her contributions as the first African American woman elected to the U.S. Congress, and a tireless advocate for women, African Americans, and folks who are all too often overlooked or underserved, the U.S. Postal Service has recognized Ms. Chisholm with the issuance of their limited-edition 37th Black Heritage Forever Stamp.

Born in Brooklyn in 1924, Shirley Chisholm’s childhood was split between New York and Barbados, where she lived with her grandmother.  Upon graduating from Brooklyn College in 1946, she pursued a career in teaching, eventually earning a master’s degree in elementary education from Columbia University.  She later served as a childcare center director, and an educational consultant for New York City’s Bureau of Child Welfare.

Shirley Chisholm was elected in 1968 as a member of the U.S. House of Representatives, representing New York as the first African American Congresswoman in that history.  She spent seven terms in Congress fighting for social justice and access to quality education for all, while championing the rights and empowerment of women, African Americans, the poor.

In addition to serving on the Education and Labor Committee, and the Veterans’ Affairs Committee, Chisholm was also one of the founding members of both the Congressional Black Caucus, and the National Organization of Women, while playing a key role the passage of Supplemental Nutrition Assistance Program (SNAP) legislation.

“Tremendous amounts of talent are lost to our society just because that talent wears a skirt.”- Shirley Chisolm

In 1972, Chisholm became widely known across the country when she became the first African American to seek a major party’s nomination for President of the United States.  In doing so, she challenged countless norms and shattered innumerable barriers which had stood since the dawn of our republic.  And it was far from easy.  She had to sue her way into televised debates, and survived multiple assassination attempts along the way.  Ms. Chisolm did not earn the Democratic Party’s nomination in 1972, but she did earn a place in history, along with the boundless respect of millions of Americans for her fundamental refusal to live life within the confines of society’s expectations.  Through her example, future generations gain a better appreciation for what it means to control one’s own destiny.

When she left Congress in 1983, Chisholm returned to teaching, accepting a post at Mount Holyoke College.  She died on January 1, 2005 in Ormond Beach, Florida, at the age of 80.

According to the U.S. Postal Service, the stamp was designed using a painting of Chisholm by artist Robert Shetterly. The portrait is taken from a series of paintings titled “Americans Who Tell the Truth.”

Valerie Jarrett is Senior Adviser to the President and Chair of the White House Council on Women and Girls.