President Obama Underscores and Reaffirm the Strength of the U.S.-Israel Relationship

March 6, 2014 at 9:50 AM ET by Matt Nosanchuk
Twitter Facebook Email
Summary:
The beginning of March provided several important opportunities for President Obama and senior administration officials to underscore that unshakeable bond between the United States and Israel.

“We do not have a closer friend or ally than Israel and the bond between our two countries and our two peoples is unbreakable.”—President Barack Obama, March 3, 2014, Bilateral Meeting with Israeli Prime Minister Benjamin Netanyahu.

The beginning of March provided several important opportunities for President Obama and senior administration officials to underscore that unshakeable bond between the United States and Israel. As they do every year, thousands of delegates to the American-Israeli Public Affairs Committee (AIPAC) 2014 Policy Conference came to Washington for an annual event that attracts bipartisan support.  Prime Minister Netanyahu’s appearance at AIPAC provided an opportunity for a meeting with President Obama at the White House. The two leaders discussed the status of the talks between the Israelis and Palestinians, progress on the P5+1 negotiations with Iran regarding Iran’s nuclear program, and regional issues, including the situations in Syria and Egypt.  As the President noted in his public remarks at the beginning of the meeting, “on a whole spectrum of issues we consult closely; we have the kind of military, intelligence and security cooperation that is unprecedented. And there is a strong bipartisan commitment in this country to make sure that Israel’s security is preserved in any contingency.”

Watch the video of the opening remarks by President Obama and Prime Minister Netanyahu at the beginning of their bilateral meeting below:

To read a transcript of the remarks, click here.

On Monday, March 3, Secretary of State John Kerry addressed the AIPAC 2014 Policy Conference about the negotiations over Iran’s nuclear program and the Israeli-Palestinian negotiations.

On Iran, Secretary Kerry reaffirmed the Obama Administration’s bottom-line in the negotiations: “let me sum up President Obama’s policy in 10 simple, clear words, unequivocal: We will not permit Iran to obtain a nuclear weapon.”  While the United States seeks to achieve this goal through diplomacy, Secretary Kerry reiterated that “no deal is better than a bad deal” and emphasized the following:

"[T]he United States will only sign an agreement that answers three critical questions the right way. First, will it make certain that Iran cannot obtain a nuclear weapon? Second, can it continuously assure the world that Iran’s program remains entirely peaceful as it claims? And third, will the agreement increase our visibility on the nuclear program and expand the breakout time so that if they were to try to go for a bomb, we know we will have time to act?"

Turning to his tireless efforts to support the direct Israeli-Palestinian negotiations to end the decades-old conflict, Secretary Kerry described how he is working hard to help the parties reach a two-state solution that brings Israelis the security and peace they deserve and the Palestinians the freedom and dignity they deserve:

"My friends, we understand that Israel has to be strong in order to make peace. But we also understand that peace will make Israel stronger. Any peace agreement must also guarantee Israel’s identity as a Jewish homeland. As [former Israeli Prime Minister] Ehud Barak said on this stage last year, a two-state solution is the only way for Israel to stay true to its founding principles – to remain both Jewish and democratic." 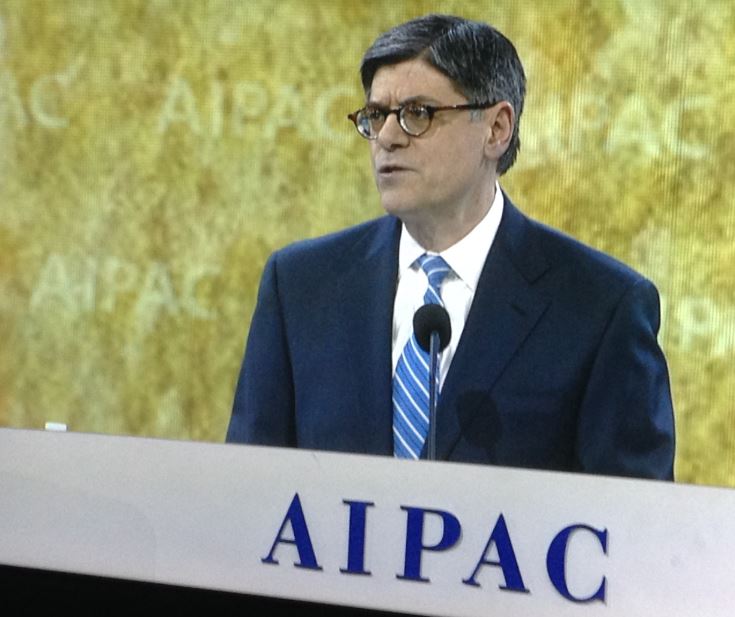 Treasury Secretary  Lew emphasized that the U.S.-Israel relationship, which is "rooted in our shared story of people yearning to be masters of their own destiny, is as vibrant as ever.”  Since the Department of the Treasury has the responsibility for administering and enforcing the existing sanctions against the Iranian regime, Secretary Lew described the administration’s vigorous enforcement of existing sanctions and emphasized that notwithstanding the limited relief that has been provided under the Joint Plan of Action, Iran is not “open for business”:

"Even as we pursue diplomacy, and even as we deliver on our commitments to provide limited sanctions relief, the vast majority of our sanctions remain firmly in place. Right now, these sanctions are imposing the kind of intense economic pressure that continues to provide a powerful incentive for Iran to negotiate. And we have sent the very clear signal to the leadership in Tehran that if these talks do not succeed, then we are prepared to impose additional sanctions on Iran and that all options remain on the table to block Iran from obtaining a nuclear weapon."

Matt Nosanchuk is an Associate Director in the White House Office of Public Engagement.