March 7, 2014 at 9:38 AM ET by Jason Furman
Twitter Facebook Email
Summary:
February 2014 was the 48th straight month of private-sector job growth, with businesses adding 8.7 million jobs over that time. Despite a major snowstorm that hit the east coast during the reference week for the labor market surveys, the rate of job growth picked up from the December and January pace.

February 2014 was the 48th straight month of private-sector job growth, with businesses adding 8.7 million jobs over that time. Despite a major snowstorm that hit the East Coast during the reference week for the labor market surveys, the rate of job growth picked up from the December and January pace. Nevertheless, the unemployment rate remains elevated, and for too many Americans, wages have been slow to rise.

This week, the President put out a budget that can make progress on these issues by investing in education, job training, and innovation, by expanding tax credits for working Americans, and by extending the emergency unemployment benefits that has expired for 2 million Americans. And while the President encourages Congress to act on his proposals, he will also continue to take action on his own wherever possible to support job growth and expand economic opportunity.

1. The private sector has added 8.7 million jobs over 48 straight months of job growth. Today we learned that total non-farm payroll employment rose by 175,000 in February, with 162,000 of that increase in the private sector. Revisions to private employment in the previous months were small and offsetting, so that that over the past twelve months, private employment has risen by 2.2 million, or an average of 183,000 a month. This is almost identical to the pace of job gains over the preceding twelve-month period (182,000 a month). 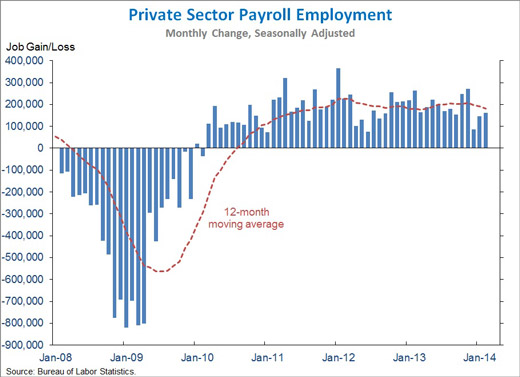 2. A major snowstorm hit the east coast from February 11 to February 14, coinciding with the reference week for the household and establishment surveys and causing millions of workers to miss at least some work. Specifically, 6.9 million nonagricultural workers that usually work full-time reported working part-time (less than 35 hours) during the survey reference week due to the bad weather, the second most in any month over the past 20 years. Another 600,000 nonagricultural workers reported missing work for the entire week due to bad weather, more than twice as many as last February. Because these workers continued to be counted as employed in the household survey, there was no impact on the unemployment rate, although it is likely that the unusual increase in weather-related absences had some effect on payroll employment and average weekly hours as measured in the establishment survey. 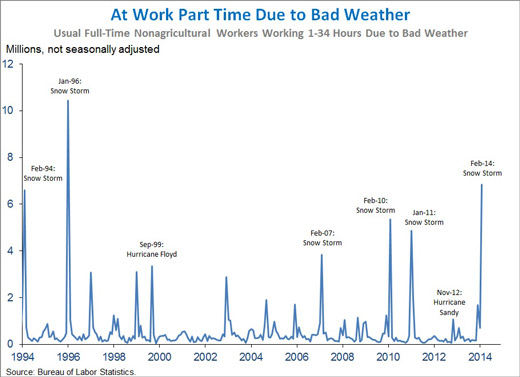 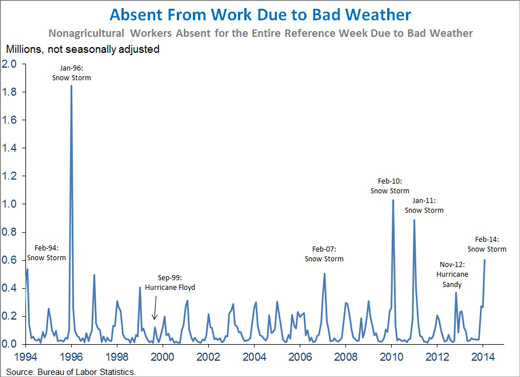 3. Recent first-reported monthly jobs estimates have been a bit less volatile than they were for much of the 2000s expansion period. The chart below shows a rolling 12-month standard deviation for the first-reported monthly change in payroll employment, a measure of volatility that shows how much the monthly values diverge from the average. The chart suggests that while the monthly employment number became much more volatile around the time of recessions in 2001 and 2007-2009, recent volatility in the jobs report is relatively low, and below what it was for much of the 2000s. Looking over the last two years, the standard deviation of the first reported monthly change in payroll employment is 44,000, indicating that about two-thirds of the reports will fall within the average of 146,000 plus or minus 44,000. This variation is due to a combination of true fluctuations in the underlying economy as well as the imprecision of measuring monthly job changes. Over this same period, revisions following the first report raise both the average (to 179,000) and the standard deviation (to 53,000). 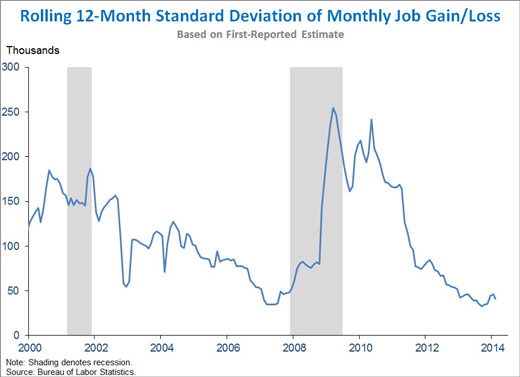 4. In recognition of Women’s History Month, we note that the female unemployment rate has been steady at 6.4 percent in each of the last two months, the lowest since November 2008. During the Great Recession, the unemployment rate rose rapidly for men, and more slowly for women, resulting in a sizeable gap between the two rates. Much of this gap reflected the fact that men tend to work in industries that were especially hard-hit by the recession. However, male unemployment began declining as soon as the recovery began, while female unemployment was little changed on balance between mid-2009 and the end of 2011. The lack of an immediate recovery in female unemployment is likely at least in part due to the lower starting-off point and job cuts in state and local governments over that period, which disproportionately affected teachers. Since the end of 2011, the female unemployment rate has fallen 1.9 percentage points. The President continues to look for ways to build on this progress and create even greater economic opportunities for women by combating discrimination, ensuring equal pay for equal work, and promoting workplace flexibility.