The President’s Commitment to Boys and Young Men of Color

March 7, 2014 at 8:38 AM ET by Akil Vohra
Twitter Facebook Email
Summary:
Last Thursday, I had the distinct privilege to join President Obama at the launch of his My Brother’s Keeper initiative, an effort to expand opportunity for all young men and boys of color. This new initiative is built upon collaboration between leading foundations and businesses, aiming to provide support and pathways for young men and boys of color. 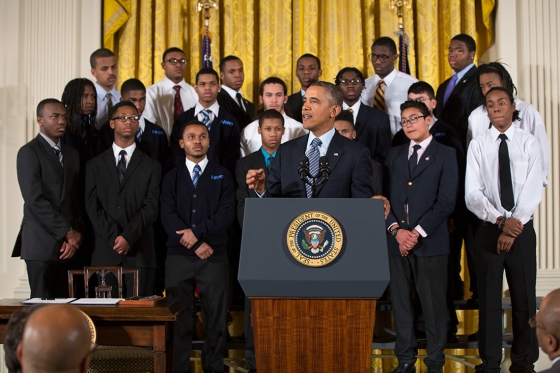 President Barack Obama delivers remarks at an event to highlight "My Brother's Keeper," an initiative to expand opportunity for young men and boys of color, in the East Room of the White House. February 27, 2014. (Official White House Photo)

Last Thursday, I had the distinct privilege to join President Obama at the launch of his My Brother’s Keeper initiative, an effort to expand opportunity for all young men and boys of color. This new initiative is built upon collaboration between leading foundations and businesses, aiming to provide support and pathways for young men and boys of color.

As stated by the White House, boys and young men of color — regardless of where they come from — are disproportionately at risk from their youngest years through college and the early stages of their professional lives.  Through disaggregated data, we see Asian American and Pacific Islander (AAPI) communities who are very much in need.  We are able to see high schools where almost half of Cambodians aren’t earning a diploma, in colleges where only 14.4 percent of Native Hawaiian and Pacific Islanders (NHPIs) graduate, and in communities where the average per capita income of Hmong Americans is lower than any racial group nationwide. Beyond high school, only 12.1 percent of the Laotian population, 14.4 percent of the Hmong population, and 14.5 percent of the Cambodian population have a bachelor’s degree or higher.

As the President stated, “This is an issue of national importance -- it's as important as any issue that I work on.  It's an issue that goes to the very heart of why I ran for President -- because if America stands for anything, it stands for the idea of opportunity for everybody; the notion that no matter who you are, or where you came from, or the circumstances into which you are born, if you work hard, if you take responsibility, then you can make it in this country.”  By signing a Presidential Memorandum, President Barack Obama established the My Brother's Keeper Task Force that will work across executive departments and agencies to assess and recommend improvements to Federal policies, regulations, and programs that apply to boys and young men of color.

The Task Force will create an Administration-wide “What Works” online portal to assess and develop recommendations for programs and practices that improve outcomes for boys and young men of color, while promoting incentives for private and public entities to develop and adopt strategies that have been proven to be effective. Additionally, the Task Force will develop a comprehensive public website, to be maintained by the Department of Education, that will assess, on an ongoing basis, critical indicators of life outcomes for boys and young men of color. And the Task Force will recommend to the President means for ensuring this effort is sustained for years to come within government and across public and private sectors.

With the collective commitment of the President, private philanthropies, businesses, governors, mayors, faith leaders, and nonprofit organizations, we can create strong foundations of opportunity for our young men and boys to help them reach their full potential.  If you are interested in knowing more about My Brother’s Keeper and the AAPI community, please email WhiteHouseAAPI@ed.gov.

Akil Vohra is Senior Advisor at the White House Initiative on Asian Americans and Pacific Islanders.