March 24, 2014 at 10:31 AM ET by First Lady Michelle Obama
Twitter Facebook Email
Summary:
The First Lady and her family travel to the city of Xi'an to view the Xi'an City Wall, the oldest and largest surviving wall of its kind in China. 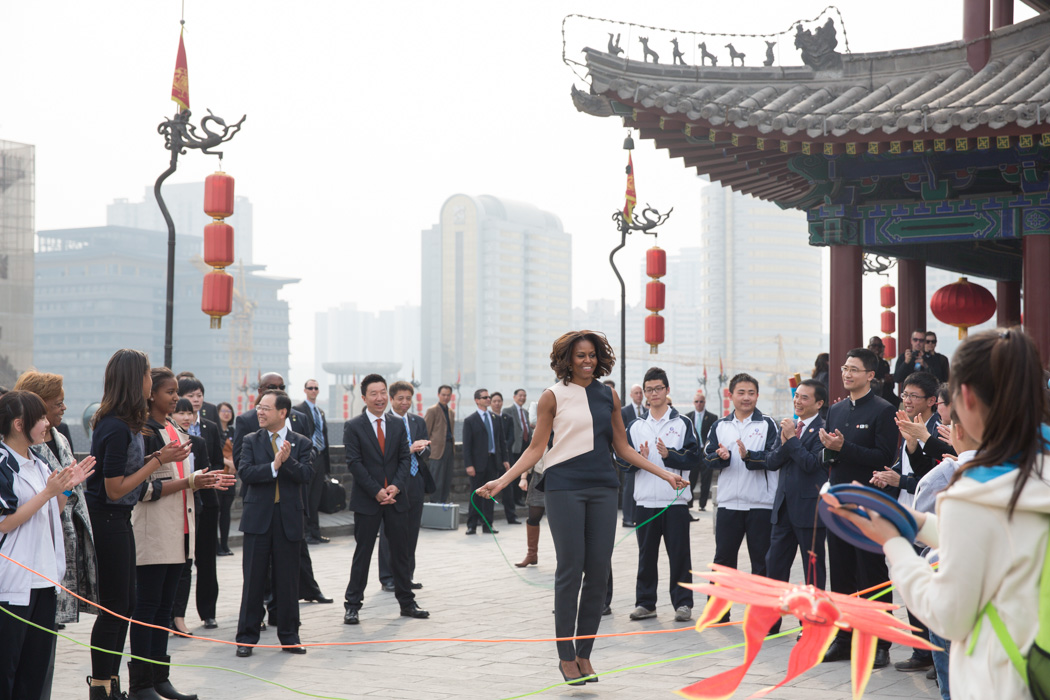 After seeing the Terra Cotta Warriors outside of Xi’an, we returned to the city to view the Xi’an City Wall.

The Xi’an City Wall is the oldest and largest surviving wall of its kind in China.  It’s a 40-foot tall rectangle that stretches for 8.5 miles.  At its base, the Wall is 50 or 60 feet wide.  At the top, it’s about 40 feet wide – wide enough for Xi’an residents and tourists to run, walk, or ride a bike around (it takes about four hours to walk the entire distance at a leisurely pace).  From the wall you can see the ancient Bell Tower, a beautiful building which marks the center of the ancient city.

Xi’an was once China’s capital city, and even after the capital was relocated, the city remained an important military stronghold for centuries.  Just like the Great Wall, the Xi’an City Wall was originally built for defense, with watchtowers and even a deep moat and drawbridges.  Parts of the wall date back to the seventh century, and the wall we know today was completed in the 14th century.  Since then, it has been refurbished three times – roughly once every two hundred years – in the late 1500s, the late 1700s and, most recently, in 1983.

Our visit began with a breathtaking display of drumming and music by performers dressed in colorful traditional costumes, and we were presented with a passport to the Wall (which is sort of like getting the key to a city -- it's a ceremonial honor that conveys respect and appreciation).  Then, as we walked along the Wall, we were treated to the following wonderful experiences: 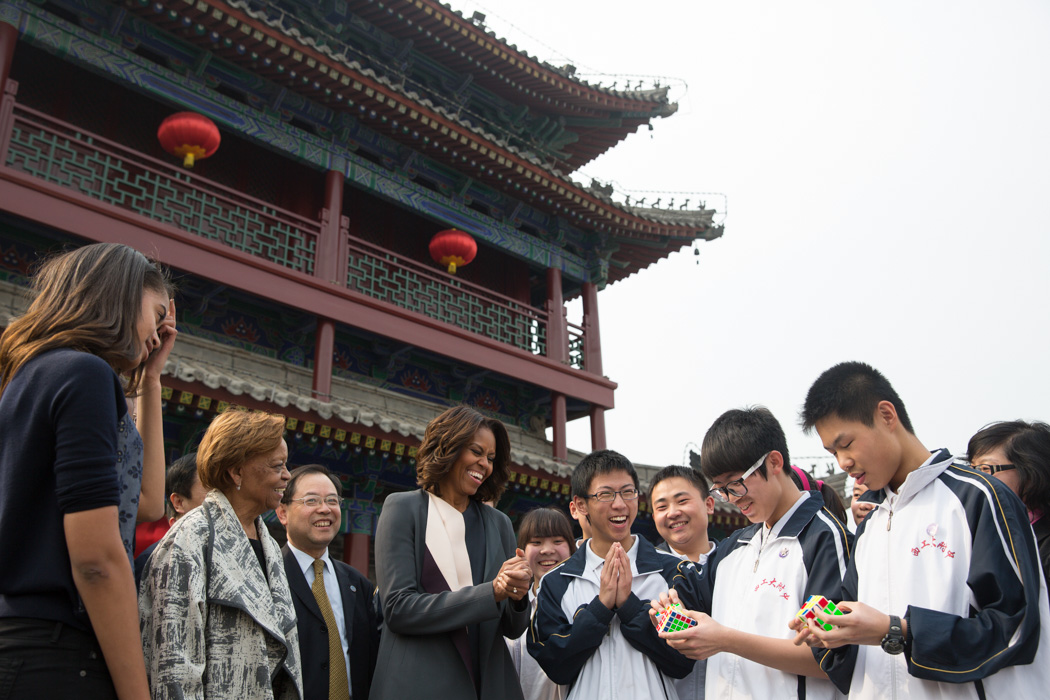 As I watched these performances and demonstrations, I was struck by how this wall, which was constructed as a physical blockade, now serves as a symbolic connection between China’s past and present.  There you stand, on top of a wall that’s hundreds of years old – a wall that has withstood war and famine and the rise and fall of dynasties.  Yet when you look down, you realize that below you on both sides lies a city not too different from one you’d see in America – a city full of cars and bustling commercial districts, but also quiet residential areas.

It reminded me a little bit of when I met with a class of sixth graders back in the United States – 11 and 12 year olds who visited China last year.  They told me that before they left, they assumed they’d encounter historic palaces and temples everywhere they went, but instead, they found massive cities full of skyscrapers and bright lights. 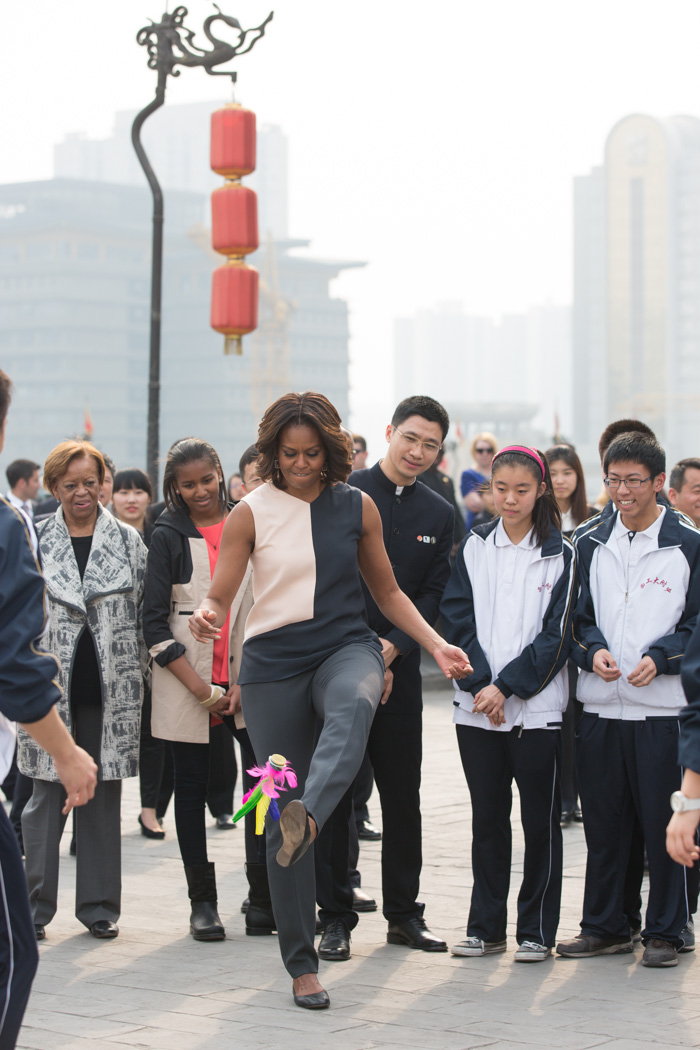 First Lady Michelle Obama participates in a hacky sack demonstration with the help of student instruction during her visit to the Xi'an City Wall with Sasha, Malia and Marian Robinson in Xi'an, China on March 24, 2014. (Official White House Photo by Amanda Lucidon)

Here at Xi’an, you can’t miss how both sides of China – the ancient and the modern – are intertwined in a city that’s as much a part of China’s past as it is its future. 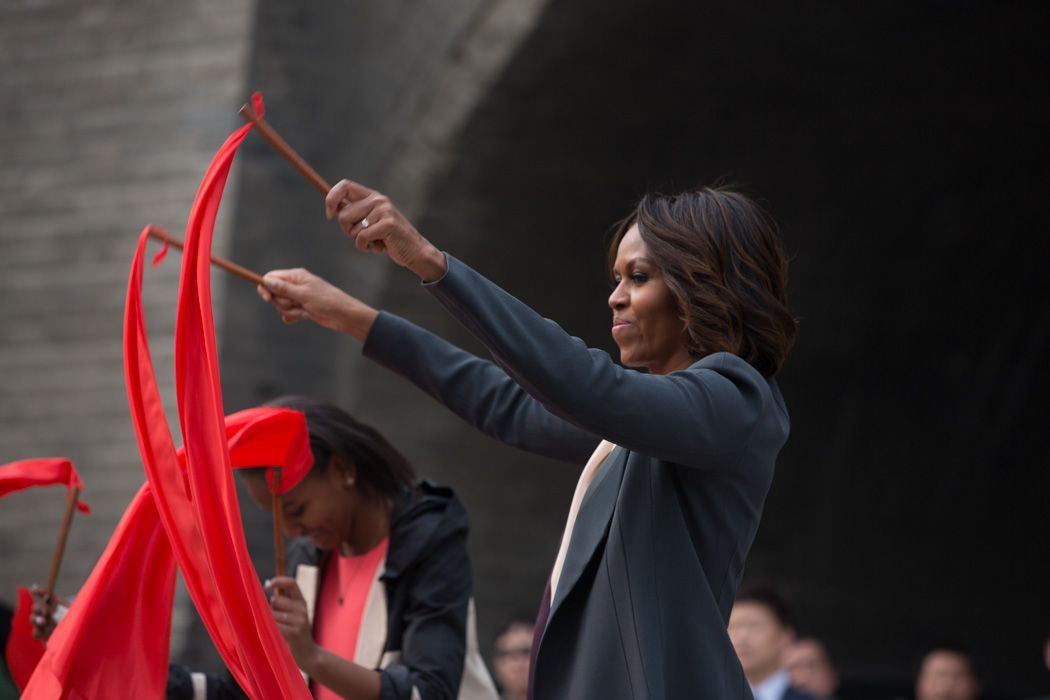 First Lady Michelle Obama waves a ribbon with Sasha and Malia as they watch a performance during their visit to the Xi'an City Wall in Xi'an, China on March 24, 2014. (Official White House Photo by Amanda Lucidon)