March 26, 2014 at 6:10 PM ET by David Hudson
Twitter Facebook Email
Summary:
President Obama travels to Belgium -- the second leg of his five-country trip to Europe and Saudi Arabia -- and talks at length about the relationship between the United States and Europe. 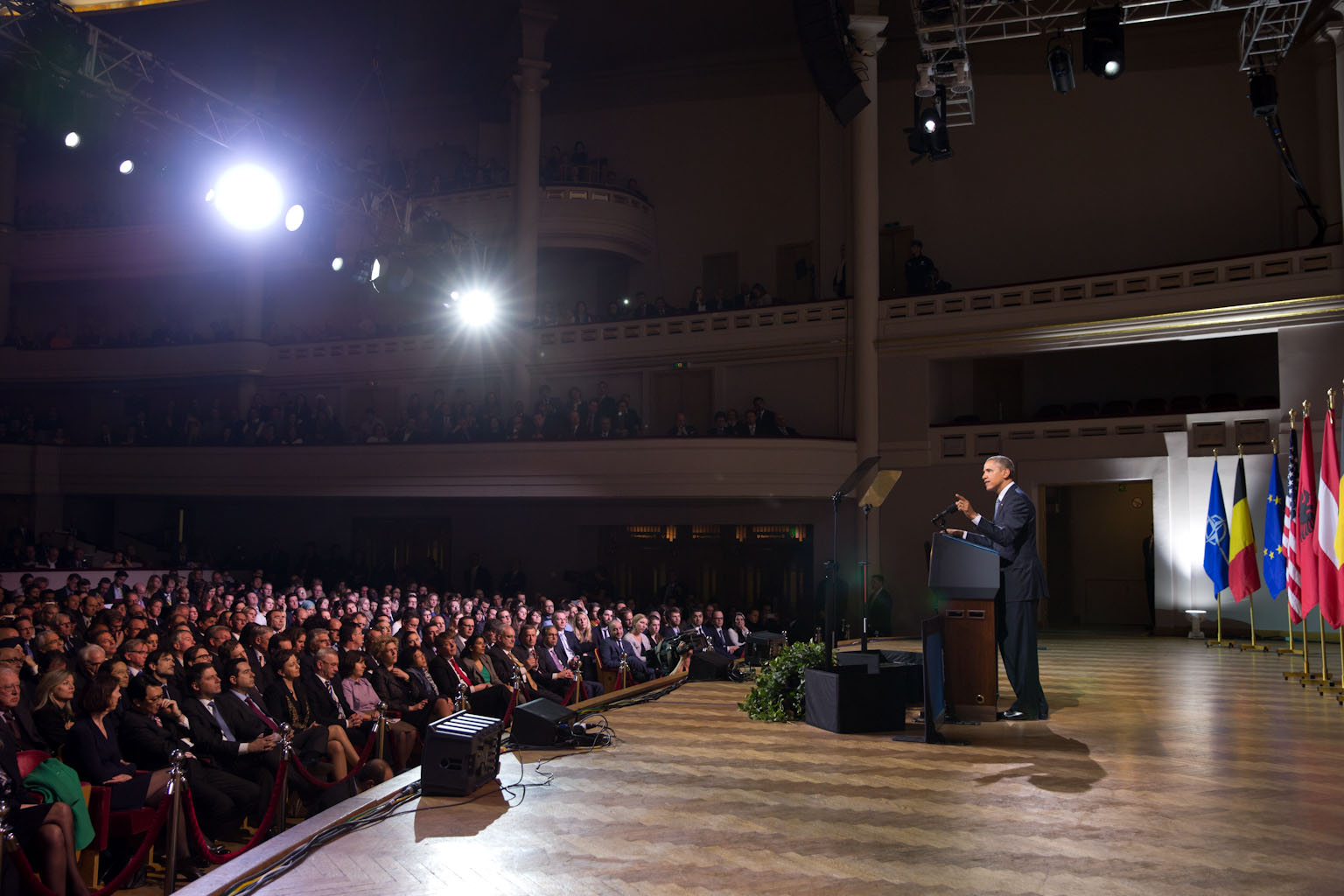 Today, President Obama traveled to Belgium — the second leg of his five-country trip to Europe and Saudi Arabia.

At the Palais des Beaux Arts (BOZAR) in Brussels, the President talked at length about the relationship between the United States and Europe. He discussed the history shared by the two regions, and how best to preserve the values and ideals that are central to the relationship.

“I come here today to insist that we must never take for granted the progress that has been won here in Europe and advanced around the world,” because the contest of ideas continues, President Obama said. “And that’s what’s at stake in Ukraine today.”

Over the last several days, the United States, Europe, and our partners around the world have been united in defense of these ideals, and united in support of the Ukrainian people. Together, we’ve condemned Russia’s invasion of Ukraine, and rejected the legitimacy of the Crimean referendum. Together, we have isolated Russia politically, suspending it from the G8 nations and downgrading our bilateral ties. Together, we are imposing costs through sanctions that have left a mark on Russia and those accountable for its actions. And if the Russian leadership stays on its current course, together we will ensure that this isolation deepens. Sanctions will expand. And the toll on Russia’s economy, as well as its standing in the world, will only increase.

“And meanwhile, the United States and our allies will continue to support the government of Ukraine as they chart a democratic course,” President Obama said. “What we want is for the Ukrainian people to make their own decisions, just like other free people around the world.”

President Obama reminded those of us in the United States and other parts of Europe that while Ukraine may seem far removed from concerns closer to home, we should not be any less invested in what’s happening there and in other countries around the world.

“There will always be voices who say that what happens in the wider world is not our concern, nor our responsibility. But we must never forget that we are heirs to a struggle for freedom,” the President said. “Our democracy, our individual opportunity only exists because those who came before us had the wisdom and the courage to recognize that our ideals will only endure if we see our self-interest in the success of other peoples and other nations.” 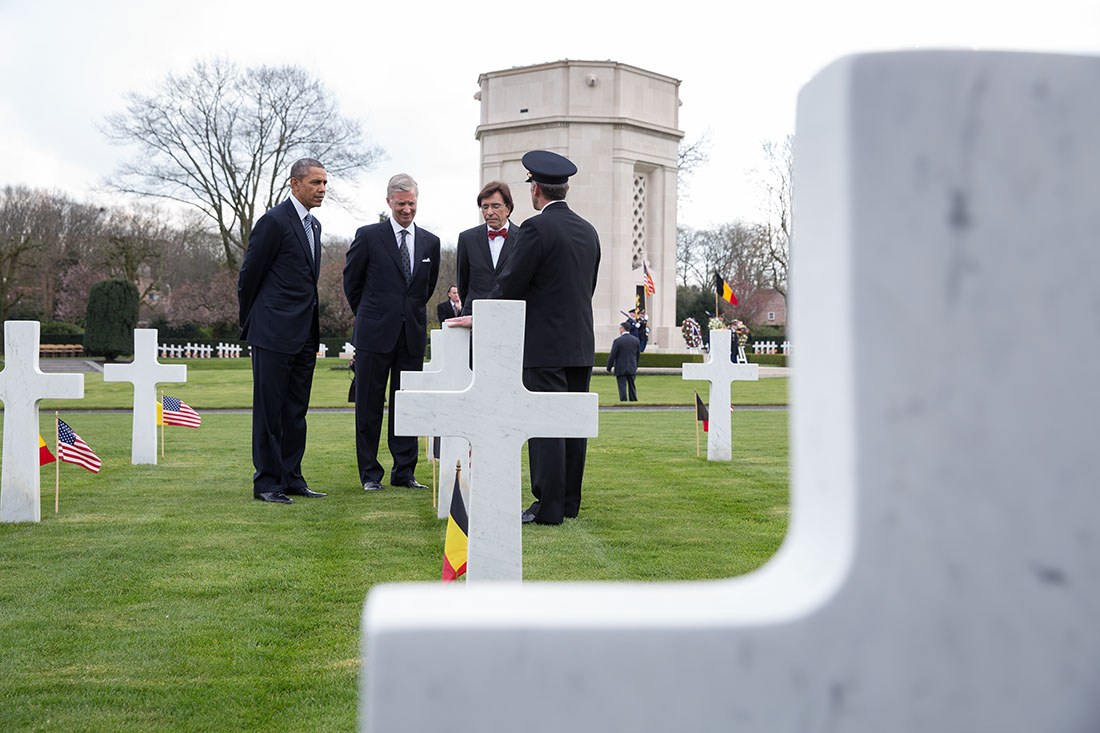 While in Belgium, the President also visited Flanders Field Cemetery, the final resting place for some of the American servicemen who gave their lives during World War I. While there, President Obama, along with His Majesty King Philippe and Prime Minister Elio Di Rupo, laid wreaths at the white stone monument at the center of the cemetery.

After leaving the cemetery, the President headed to the Council of the European Union for the EU-U.S. Summit. The joint statement from the summit reaffirmed the “strong partnership” between the European Union and the United States, and addressed a number of issues, most notably the crisis in Ukraine. A press conference was also held during the summit, featuring President Obama, European Council President Herman Van Rompuy, and European Commission President José Manuel Barroso. 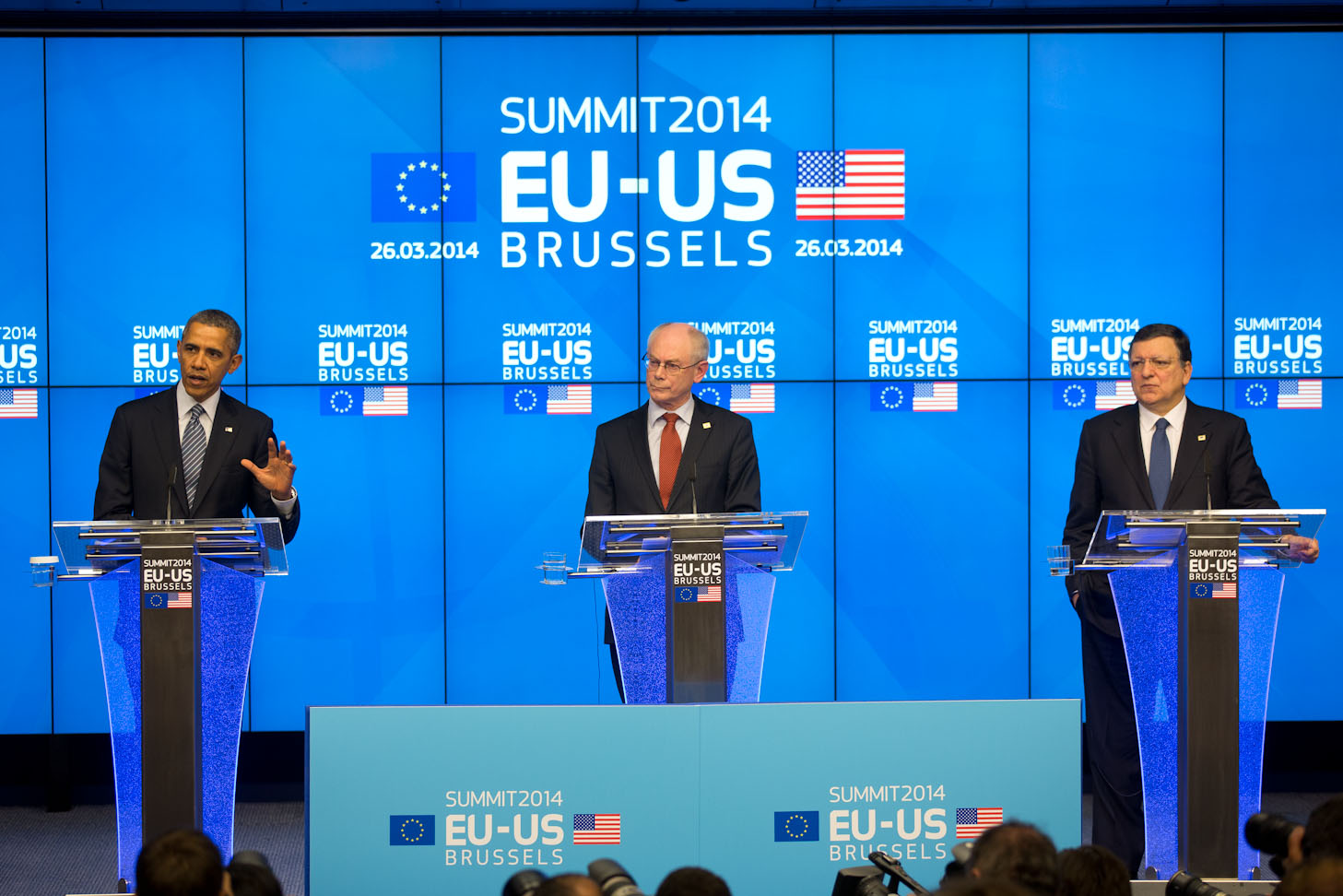 The President later met with NATO Secretary General Anders Fogh Rasmussen at The Hotel in Brussels. The two gave brief remarks before the meeting, during which Secretary General Rasmussen reiterated support for Ukraine's sovereignty and territorial integrity:

Our commitment to the defense of our allies is unbreakable, and at the same time, we are firm in our support of Ukraine’s sovereignty and territorial integrity. We will intensify our military cooperation with the Ukraine, including helping the Ukrainians to modernize their armed forces.