March 26, 2014 at 6:27 PM ET by Gautam Raghavan
Twitter Facebook Email
Summary:
Dr. Jill Biden meets with LGBT individuals at the White House to hear about their experiences with health care coverage and how they are benefiting from the Affordable Care Act.

Dr. Jill Biden meets with members of the LGBT community who have benefited from the Affordable Care Act in the Roosevelt Room of the White House, March 26, 2014.

An important deadline is coming up for all Americans, including the LGBT community: March 31 is the end of the open enrollment period for individuals to sign up for health care in the state and federal Marketplaces. If you miss the deadline, you may not be able to get health insurance again until next year.

The Affordable Care Act has the potential to improve the health and well-being of the LGBT community for generations to come. (Here’s how.) Many LGBT individuals across the country have signed up for coverage — and they’re already seeing the benefits.

Earlier today, Dr. Jill Biden met with the following LGBT individuals at the White House to hear about their experiences with health care coverage and how they are benefiting from the Affordable Care Act:

Dr. Biden heard from a gay man who lost his job in 2010, the same year he was diagnosed with HIV. Because of his pre-existing conditions, he went four years without health insurance — until he signed up for a plan through the federal Marketplace. At the meeting, he told Dr. Biden that the Affordable Care Act saved his life.

She also heard from a same-sex married couple from Atlanta, Georgia, who, as small business owners, previously had private health care plans. But thanks to the Affordable Care Act, they now have a plan with lower co-pays, lower deductibles, and lower out-of-pocket costs — and they’re saving more than $5,000 a year.

And she heard from a 21-year-old lesbian student from Virginia who switched from an expensive school-sponsored plan to one she bought on the Marketplace that is saving her hundreds of dollars each month. 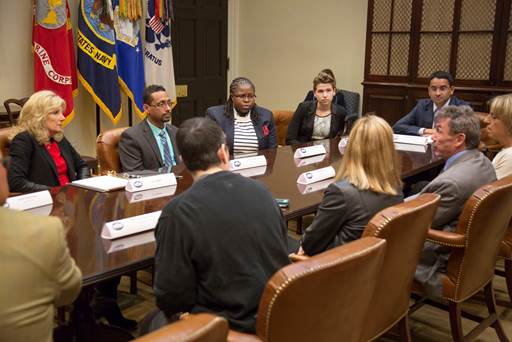 Dr. Jill Biden talks with members of the LGBT community who have benefited from the Affordable Care Act in the Roosevelt Room of the White House, March 26, 2014.

Stories like these highlight why the Affordable Care Act will make such a difference for LGBT people: because pre-existing conditions are not a barrier to coverage, because LGBT individuals can’t be denied coverage or charged a higher rate because of who they are, and because it is affordable.

In case you missed it: