The First Lady's Travel Journal: A Taste of Tibetan Culture

March 26, 2014 at 9:32 AM ET by First Lady Michelle Obama
Twitter Facebook Email
Summary:
To experience some of the rich culture of Tibet, the First Lady and her family headed to the Zangxiang Village Tea House for a traditional Tibetan meal. 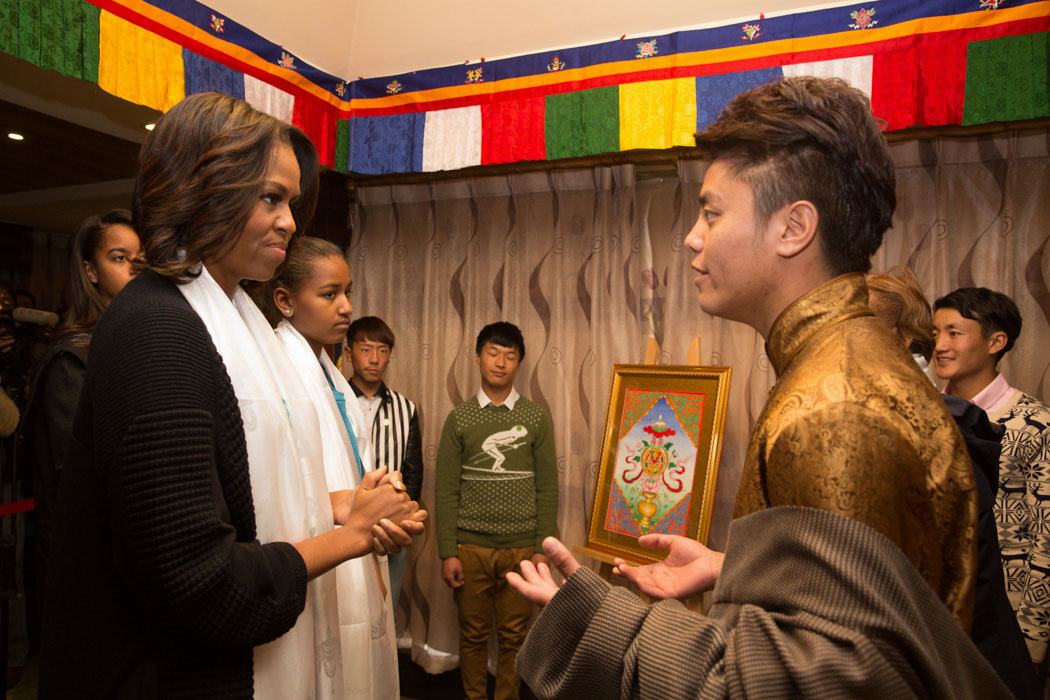 Chengdu is sometimes known as the “Gateway to Tibet" because it is located just a few hours from the towering mountains and rich culture of Tibet, which is a region of China.  There are roughly 6.5 million Tibetans in China, and they are one of the largest and most well-known minority groups in the country.

For centuries, Tibet was largely unknown to the outside world -- but today, Tibetan Buddhism (the main religion in this area) and its spiritual leader in exile, the Dalai Lama, are known across the globe for their teachings on compassion, forgiveness and tolerance.  Tibet is also known for its beautiful, majestic landscapes.  Some of the world’s tallest mountains are located there – if you want to scale Mount Everest, you can start from a base camp in Tibet.

To experience some of the rich culture of Tibet, we headed to the Zangxiang Village Tea House for a traditional Tibetan meal that included the following items: truk ja (yak butter tea), yak soup made with highland barley, sha pa le (yak pie made with minced onion and celery), boiled yak ribs, samba (a dense bread made with barley) and steamed vegetables with barley.

Before we ate, we had the chance to spin a traditional Tibetan prayer wheel, a device used by the Tibetan people to spread spiritual blessings.  Tibetans believe that spinning this wheel helps one accumulate wisdom and merit (known as good "karma") and purify themselves of bad things (known as bad "karma").

We were then greeted by a group of Tibetan students who placed beautiful silk scarves called "khataks" (which symbolize purity and compassion and are thought to bring good luck) around our necks -- this is considered a welcome gesture.  The students then displayed magnificent paintings they had made called "thangkas."  Thangkas traditionally depict images of Buddhist deities, retell myths or describe historical events.

I am incredibly grateful that we had the chance to learn a little bit about Tibetan traditions.  The Tibetan people have struggled to preserve their unique religious and cultural traditions, and this visit was a powerful reminder of how important it is for each of us to treasure what makes us special, even when it makes us feel different from everyone else.  I know that's not always easy, especially when you're a minority in your school or community.  But in America, our diversity is what makes us who we are -- it's what makes our country so vibrant, strong and endlessly interesting.  So don't be afraid to celebrate where you come from and whatever it is that makes you who you are -- and don't hesitate to share that with others.

This visit was such a wonderful way to end our journey here in China.  It has been a tremendous honor for me, my daughters and my mother to experience this fascinating country over this past week.  I’ve especially enjoyed speaking with young people in China, learning about their hopes and dreams, and sharing your stories with them and their stories with all of you.  I hope you've enjoyed learning about your peers on the other side of the globe -- and I hope you find ways to keep on learning about China and other countries around the world in the years ahead.

Thanks for traveling along with us!