Women of Character, Courage, and Commitment at the Department of Defense

When asked about the women who joined the Women’s Army Corps during World War II, General Douglas MacArthur called them “my best soldiers.” Anyone who doubts whether women belong on the battlefield would do well to remember those words. Today women play an indispensable role in defending America’s national security interests at home and abroad.

Throughout Women’s History Month, the Department of Defense has been highlighting women of character, courage, and commitment who serve our country. As the month draws to a close, I’d like to introduce you to three of our most senior leaders, each of whom is integral to the department and its mission. 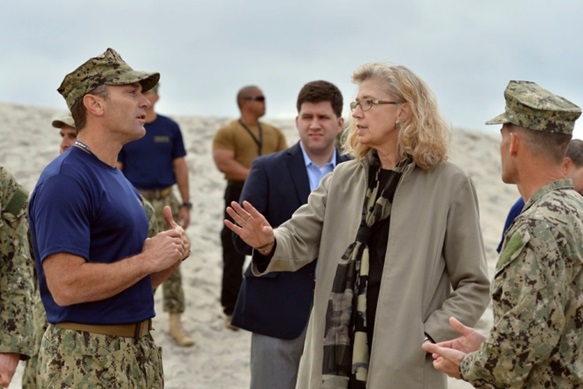 Last December, when President Obama appointed Christine Fox (pictured above) to become my deputy as the Acting Deputy Secretary of Defense, she became the highest-ranking woman to ever serve at the Department of Defense.

The Deputy Secretary of Defense is generally viewed as the person who manages the Pentagon’s day-to-day functions, and Christine knows the intricacies of DoD’s budget, programs, and global undertakings better than anyone. Having previously served as director of DoD’s office of Cost Assessment and Program Evaluation, as president of the Center for Naval Analyses, and as senior advisor to the National Security Analysis Department at Johns Hopkins’ Applied Physics Laboratory, Christine brings more than 30 years of experience as a defense leader, and as an analyst and research manager focusing on real-world operations.

Over the last few months, I’ve greatly benefited from Christine’s wise counsel, her vast knowledge and experience, and her innovative thinking. In a time of great transition for DoD, as we move off a 13-year war footing and confront new strategic and fiscal challenges, Christine has been one of my most important advisors and a real partner. She’s among the Pentagon’s most brilliant strategic thinkers, and, having broken many barriers, she serves as a role model for women throughout the national security and foreign policy arena. 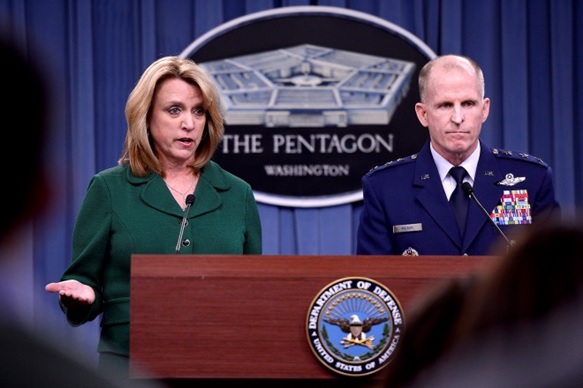 In every job Deborah Lee James (pictured above) has held – from serving as a staffer on the House Armed Services Committee to being president of Science Applications International Corporation’s Technical and Engineering Sector – her approach has been the same: understand the problems and opportunities, listen carefully, and then act with determination and decisiveness to fix the problems and seize the opportunities.

Debbie is now the second woman to serve as Secretary of the Air Force, and her professional acumen was on full display this January, when, less than a month on the job, she learned of troubling allegations concerning the ethical behavior of several airmen stationed at some of our ballistic missile launch sites. Debbie responded swiftly, decisively, and thoughtfully to these allegations, and is ensuring the continued safety, security, and effectiveness of our nuclear enterprise – a perfect example of what leadership is all about.

Going forward, DoD will need to be able to recruit and retain many more strong, smart, and talented women like Debbie and Christine who have the skills, leadership, and creativity to help tackle the challenges ahead.  Even as we wind down our nation’s longest war, we are seeing that the world is growing more volatile, less predictable, and in some ways more threatening to the United States. Part of how we’re adapting is through innovation, to ensure that we maintain our military’s technological edge over any potential adversaries. That will ultimately require more people with experience in the STEM fields of science, technology, engineering, and math. 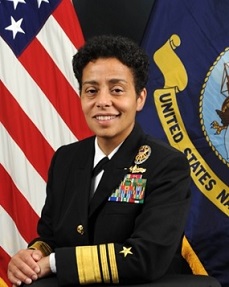 We’ll also need women like Vice Admiral Michelle Howard (pictured above), who currently serves as the Navy’s Deputy Chief of Naval Operations for Operations, Plans, and Strategy. When she is promoted in the next few months, she’ll become the first woman to hold the rank of four-star Admiral in the history of the U.S. Navy – an important milestone that comes two years after the Air Force’s first woman four-star General, and six years after the Army’s first woman four-star General. And once she assumes her new position as Vice Chief of Naval Operations, Admiral Howard will also become the first woman to serve as the second-ranking officer of a military service within DoD, making her the highest-ranking woman in uniform in Pentagon history.

Admiral Howard has helped dispel misconceptions about women in the military for more than 30 years. Along with other early Navy women pioneers, she proved that women could serve as surface warfare officers. In the years since, she’s proven herself to be among the Navy’s best operational commanders. In 2009, as commander of the counterpiracy-focused Combined Task Force 151, she oversaw the response to the hijacking of the cargo ship MV Maersk Alabama by Somali pirates, having assumed her command just a few days beforehand.

Secretary Fox, Secretary James, and Admiral Howard are but a few of the many women who have devoted their lives to helping protect America’s national security interests. In the coming years, there will – and should – be many more women who rise to positions of leadership across the Department of Defense. Because women in the military were for too long seen as an outlier rather than the norm, making the military more open to women requires everyone to take responsibility – and DoD’s senior leaders and I are fully committed to making sure that the U.S. military is a place where all who serve are treated fairly and equally, with the full dignity and respect they so richly deserve.

That’s why we’re going to continue our efforts to open up ground combat positions so that talented, qualified women will no longer be barred from serving in them. In the past, such barriers often hindered women’s ability to get promoted to higher ranks, creating a so-called “brass ceiling,” even though many women were fighting and sometimes dying in places like Iraq and Afghanistan. Since 2012, DoD has identified approximately 57,000 positions previously closed to women that will be opened up. As President Obama has said, “our military will grow even stronger with our mothers, wives, sisters, and daughters playing a greater role in protecting this country we love.”

We’re also going to continue a campaign I have personally led to eradicate sexual assault in the military, a crime that impacts both men and women who serve in uniform. Sexual assault is not only one of the worst crimes a service member can commit against another, but it also destroys the bonds of trust and confidence that lie at the very heart of our military.

Over the past year, I directed nearly two dozen initiatives to strengthen commander accountability, command climate, victim advocacy, and safety, as well as to enhance victim support and pretrial investigations, strengthen oversight, and make prevention and response efforts more consistent across the military services. But as I’ve made clear to DoD’s senior leaders, our success depends on a dynamic and responsive approach to all issues that affect our men and women, particularly sexual harassment and sexual assault. We must and will keep trying to improve our prevention and response programs.

I’ve been meeting every week with the department’s senior leadership over the past year to personally review our sexual assault prevention and response efforts and progress and ensure that all of these initiatives are being implemented to the fullest extent, and I will continue these weekly meetings. Eliminating sexual assault in the military is one of DoD’s highest priorities, and like President Obama, I am committed to doing whatever it takes to solve this problem.

From General MacArthur’s words to Admiral Howard’s upcoming promotion, we’ve come a long way toward giving women a truly equal opportunity to serve in uniform and throughout DoD – and we’ve still got a lot more work ahead of us. It won’t be easy, and it won’t happen overnight, but we strive toward that goal because we know diversity is at the heart of our strength. We have to live the values we defend, and America’s all-volunteer force is at its best when it reflects all the people of our nation.

Every person who serves our country in uniform – regardless of race, color, sex, religion, sexual orientation, or national origin – has stepped forward with courage and commitment. All that matters is their patriotism, their willingness to serve their country, and their qualifications to do so – and that’s all that ever should.

Chuck Hagel is the Secretary of Defense.