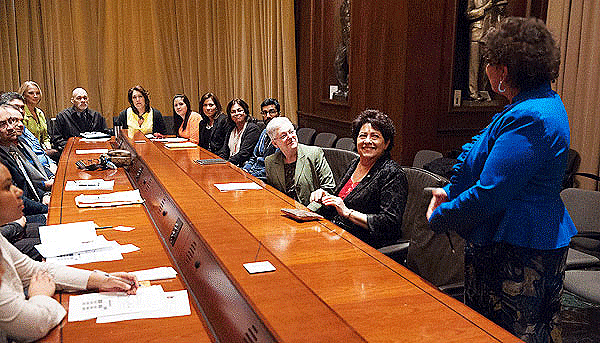 Recently, EPA hosted a group of students and professors from the University of Puerto Rico’s Graduate School of Public Health. The group was visiting EPA and other agencies in Washington, DC to explore internship and employment opportunities in the federal government. It was exciting to see this group of young well-prepared Latinas ready to join the workforce.

The visiting students and professors met with several Hispanic employees from different EPA program offices. They discussed the work they are currently doing to protect the environment and human health. The employees shared some valuable advice on the skills necessary to be successful in the workplace. Furthermore, they described how they joined the agency. While we had Hispanic scientists, engineers, and lawyers with different areas of expertise, they shared some common experiences. Many had joined the agency through EPA’s internship programs.

The highlight of the afternoon was when Administrator Gina McCarthy and OPM Director Katherine Archuleta met with the visiting group and the employees. Administrator McCarthy emphasized that public health is at the core of EPA’s mission. While describing the work the agency is doing to address health disparities among Hispanics and other minorities, she mentioned the research EPA is conducting on the high incidence of asthma among Puerto Ricans.

During the meeting, Administrator McCarthy stressed the need to have a high-performing workforce that “looked like America” to fulfill the agency’s mission. She encouraged the visiting students to keep their eyes open for future opportunities at the agency. Director Archuleta echoed her words and urged students to visit OPM’s website for internship and job opportunities throughout the federal government. She recommended that they start by registering in USAJOBS. As they left, I overheard several students saying “I’m going to USAJOBS tonight!”

Personally, I was happy to see many women in leadership positions at the agency as well as a new generation of young Latinas following in our footsteps. In sum, the future is bright for women at EPA.

About the author: Lina Younes has been working for EPA since 2002 and currently serves the Multilingual Communications Liaison for EPA. She manages EPA’s social media efforts in Spanish. Prior to joining EPA, she was the Washington bureau chief for two Puerto Rican newspapers and she has worked for several government agencies.