President Obama Welcomes the Red Sox to the White House

April 1, 2014 at 6:16 PM ET by David Hudson
Twitter Facebook Email
Summary:
President Obama welcomes the Boston Red Sox to the White House, in honor of their 2013 World Series Championship -- their third title in the past decade.

Today, the President welcomed the Boston Red Sox to the White House, in honor of their World Series Championship last season.

Delivering remarks on the White House's South Lawn, President Obama praised the team for their continued success over the past decade. "Back in 2004, watching the Red Sox win the World Series was a novelty," the President said. "But over the past 10 years, this clubhouse has the winningest championship record in baseball — three World Series titles in a decade."

After presenting President Obama with an honorary Red Sox jersey, World Series MVP David Ortiz — nicknamed "Big Papi" — made the most of the moment by taking a selfie with the President himself. 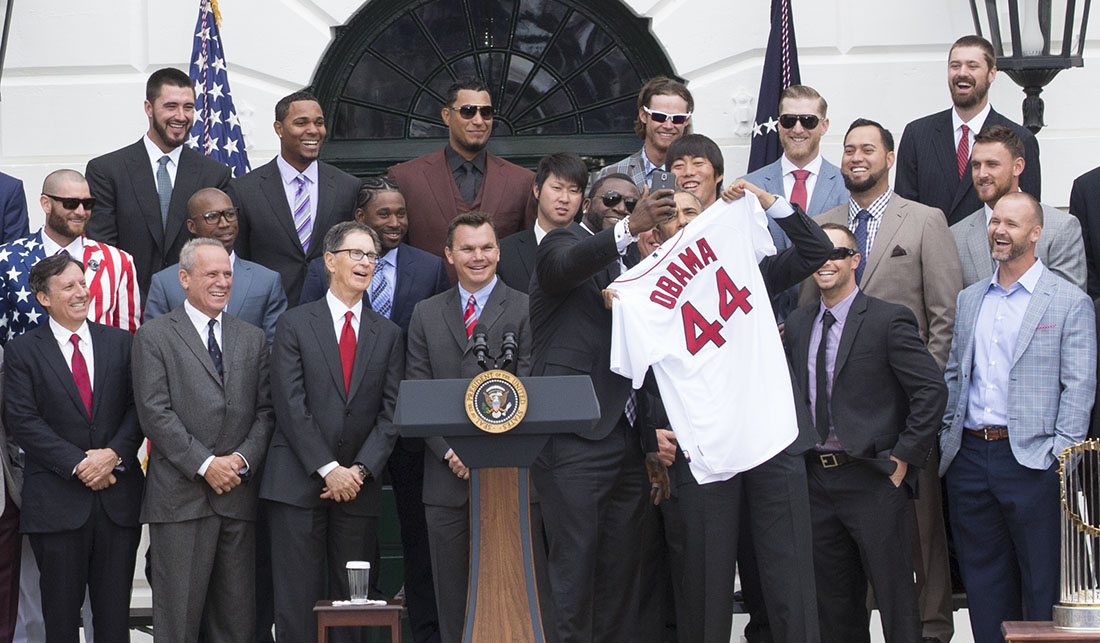 David Ortiz takes a selfie with President Barack Obama as the team presents a jersey during an event to welcome the Boston Red Sox to the White House to honor the team and their 2013 World Series Championship, on the South Lawn of the White House, April 1, 2014. (Official White House Photo by Amanda Lucidon)

The President also remarked on the significance of the team's title in the wake of last year's Boston Marathon bombing:

And we knew last year, even as we mourned the lost and cared for the wounded and resolved to carry on, that the moment would come when the Sox would be champions again and the crowds would gather for a parade down Boylston once more. And that’s exactly what happened. That’s how this team helped Boston to heal.

"The bottom line is I'm proud of these guys," the President said. "As a baseball fan, I appreciate their comeback season. But more importantly, as President, I'm grateful for their character and their embrace of the essential role they played in the spirit of [Boston]."

In other news, Red Sox first baseman Mike Napoli was named to the President's Council on Beards, announced earlier today. Learn more about the Council here.