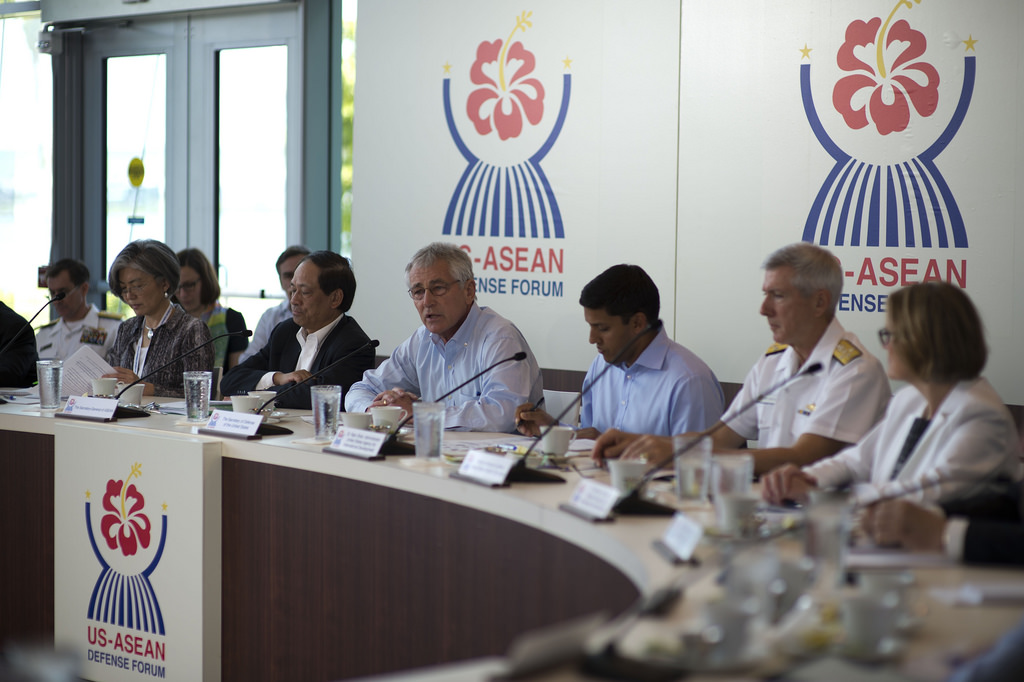 Secretary of Defense Chuck Hagel hosts a roundtable meeting with defense ministers from the Association of South East Asian Nations in Honolulu, Hawaii, April 2, 2014. (DoD Photo by Erin A. Kirk-Cuomo)

As this week’s report by the Intergovernmental Panel on Climate Change reminds us, combating climate change requires more than cutting greenhouse gas emissions. We must also prepare for the impacts that we can’t avoid, and the United States must continue to help our allies and partners do the same. That’s what American leadership is about.

That leadership is on display this week in Hawaii, where Secretary of Defense Chuck Hagel is hosting the 10 defense ministers of the Association of Southeast Asian Nations (ASEAN) for a first-of-its-kind gathering on U.S. soil. One of the goals of this meeting is to identify how our militaries can work together more effectively to tackle non-traditional security challenges, including climate change and natural disasters. 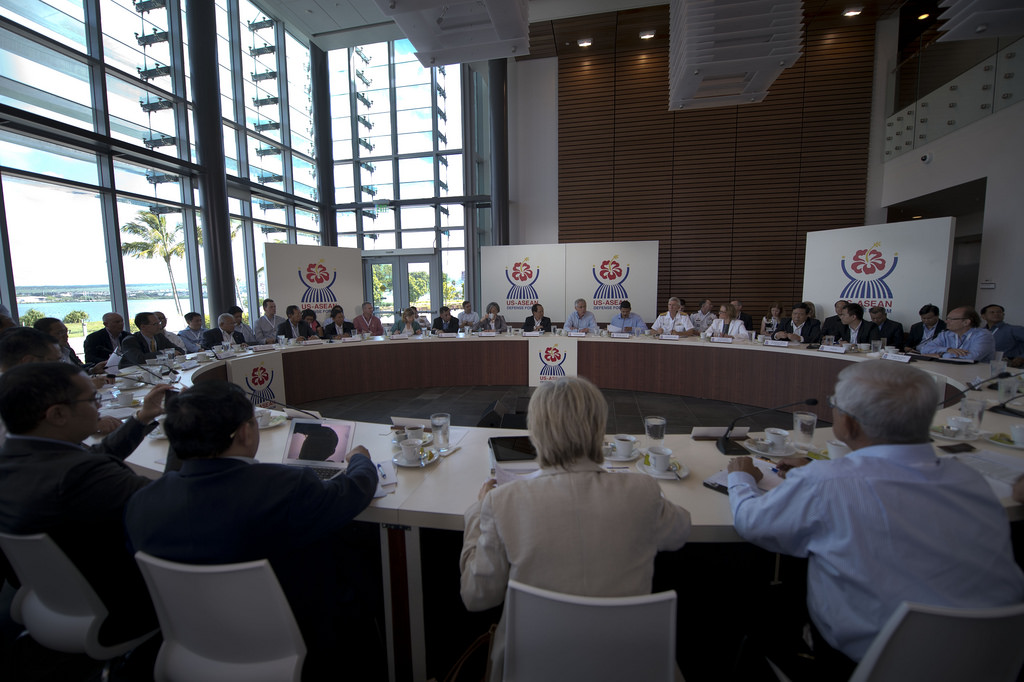 Secretary of Defense Chuck Hagel hosts a roundtable meeting with defense ministers from the Association of South East Asian Nations in Honolulu, Hawaii, April 2, 2014. (DoD Photo by Erin A. Kirk-Cuomo)

As Typhoon Haiyan in the Philippines showed last fall, natural disasters pose a growing threat to regional stability, security, and prosperity, and put countless lives and resources at risk. Even though we can’t attribute any one storm to climate change, as the President has said, we know that “in a world that’s warmer than it used to be, all weather events are affected by a warming planet.”

Climate change is not just an environmental problem; it’s an economic and security problem as well. The United States military is unmatched in its humanitarian assistance and disaster response capabilities, and Southeast Asia is one of the regions expected to face some of the worst effects of climate change — including floods, famines, and sea level rise. The Department of Defense expects the frequency, scale, and complexity of future humanitarian assistance and disaster response missions in the region to increase in the future.

The Asia-Pacific region is a critical part of the global economy, but its continued security and prosperity will be challenged by the impacts of climate change. This isn’t a challenge that any nation can handle on its own. As the Defense Department’s 2014 Quadrennial Defense Review makes clear, climate change “creates both a need and an opportunity for nations to work together.” Forging strong partnerships among military and civilian agencies is a key part of preparing for the impacts of climate change. That’s why Secretary Hagel and military leaders are working to bolster the capabilities of our allies and partners in these areas. 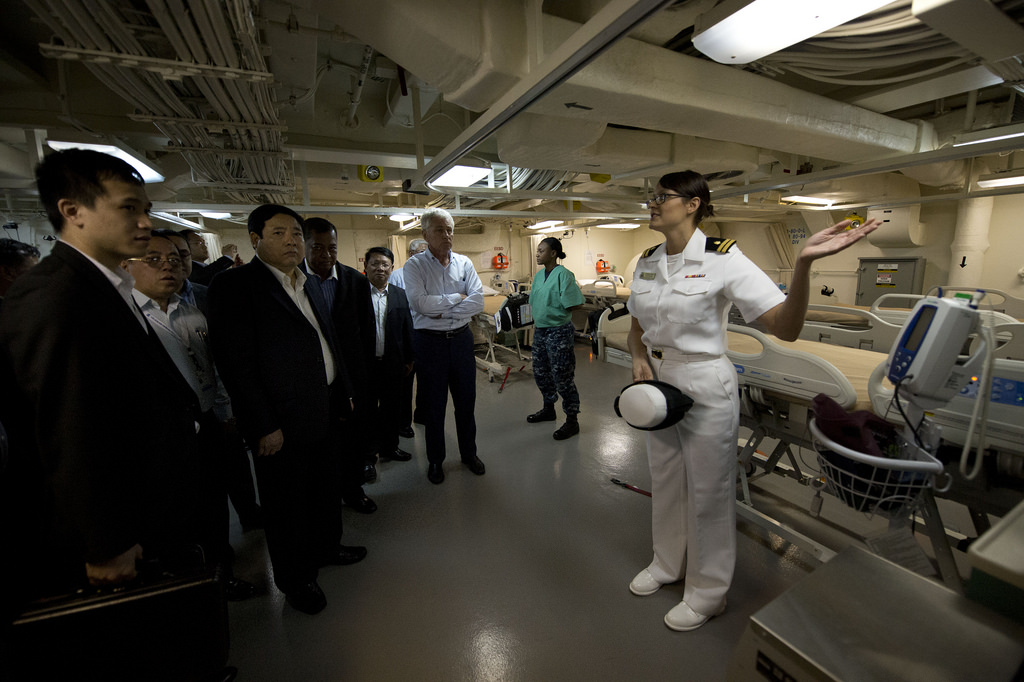 Secretary of Defense Chuck Hagel tours the USS Anchorage LPD-23 along with defense ministers from the Association of South East Asian Nations in Honolulu, Hawaii, April 2, 2014. (DoD Photo by Erin A. Kirk-Cuomo)

In addition to touring some of our latest capabilities deployed to the Pacific — such as the Navy’s newest amphibious transport ship, the U.S.S. Anchorage — Secretary Hagel and the ASEAN defense ministers will visit NOAA’s Inouye Regional Center with NOAA Administrator Dr. Kathryn Sullivan, and will receive briefings on tsunami warning, threat, and detection. USAID Administrator Dr. Rajiv Shah will also lead a roundtable discussion exploring new ways we can better work together to enhance humanitarian assistance and disaster relief efforts.

During the Obama Administration, DoD has focused on adapting to and mitigating the effects of climate change. DoD invests in energy efficiency, new technologies, and renewable energy sources at its installations because it helps service members carry out their mission. And these efforts are achieving real-world results.

In 2012, energy efficiency and renewable energy improvements like tactical solar gear at combat outposts in Afghanistan saved roughly 20 million gallons of fuel — taking 7,000 truckloads worth of fuel off the battlefield. By 2025, private-sector investments on DoD installations will be generating 3,000 megawatts of renewable energy. That's enough to power 750,000 homes — 50 percent more power than the Hoover Dam. And because DoD knows that climate change is already underway, it is assessing its coastal and desert installations to ensure they will be resilient in the future. These initiatives all support President Obama's Climate Action Plan, which outlines how the United States will work with the international community in addressing these serious global challenges.

Planning for climate change and making smarter energy investments not only makes our military stronger. It also saves money, reduces demand, and protects the environment. That’s why President Obama and his administration will continue to lead and act on climate change wherever possible — including by forging strong partnerships with our regional allies and helping them prepare for and respond to their own climate challenges.