April 4, 2014 at 12:15 PM ET by Tara McGuinness
Twitter Facebook Email
Summary:
Enrollment in Medicaid and CHIP in February was at least 3 million people higher than it was, on average, between July and September. While this is great progress, states where governors or legislatures refuse to implement the Medicaid expansion provisions of the law will leave 5.7 million Americans uninsured.

The Affordable Care Act (ACA) has already provided coverage to millions of Americans. More than 7.1 million Americans signed up for coverage through the Marketplaces, 3 million additional young adults were covered under their parents’ insurance and millions more will have access through Medicaid. A new report shows that more people are gaining coverage through Medicaid and the Children’s Health Insurance Program (CHIP) as a result of the health law. The analysis, produced by the Health and Human Services Department shows enrollment in Medicaid and CHIP in February was at least 3 million people higher than it was, on average, between July and September. That does not include March, which saw an enormous spike in Marketplace enrollment and traffic to HealthCare.gov.

While this is great progress, states where governors or legislatures refuse to implement the Medicaid expansion provisions of the law will leave 5.7 million Americans uninsured. States that have expanded Medicaid, such as Kentucky and New York, have seen particularly dramatic declines in their uninsured populations. Just take Kentucky, according to the Louisville Courier-Journal, Kentucky has seen a 40 percent drop in its rate of uninsured since October 1. 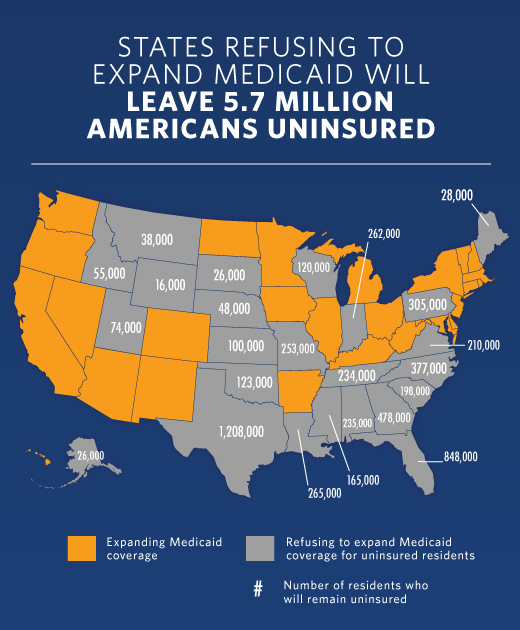 While open enrollment for the Marketplaces closed on March 31st, Medicaid coverage enrollment continues year round. That means we are going to continue, working with partners, to sign people up for Medicaid. We have made improvements to our systems and we are ramping up the tactics and tools that are working to reach uninsured Americans. We have learned that Medicaid expansion had a positive impact in getting people covered, as enrollment growth in states that expanded Medicaid was over 5 times higher than in other states (8.3 percent versus 1.6 percent).

One effective strategy for reaching people to get them signed up is through creative partnerships with hospitals and other service providers. For example, in many places hospitals make preliminary eligibility determinations and use a single, streamlined application for coverage. One other effective effort underway in five states uses supplemental nutritional assistance program (SNAP) income data information to identify individuals who are likely eligible for Medicaid and CHIP.

As of the end of February, almost half a million individuals have been determined eligible for Medicaid or CHIP as a result of this targeted effort, and more States are exploring similar strategies. Finally, all States are working to implement provisions of the Affordable Care Act which will make it much simpler and easier for individuals to apply for Medicaid coverage than prior to the law’s passage.

Twenty-six States and the District of Columbia have expanded their Medicaid programs to cover low-income adults, providing access to millions of Americans who previously had no source of affordable health insurance. Earlier this week, on April 1, Michigan began enrolling individuals, expanding Medicaid eligibility to 470,000 people. The week before that, New Hampshire signed the Medicaid expansion into law, providing 50,000 people access to Medicaid coverage starting this July.

The arc of progress takes time. Since Medicaid was created in 1965, Medicaid has served a critical role in providing health coverage to certain low-income Americans. The ACA has moved beyond helping women and children, people with disabilities, and seniors, to expanding eligibility to all low-income people so that hard-working Americans who don’t have access to health care from their jobs don’t have to live in fear of getting sick. In the days and weeks to come, we will make sure we explain to the public the consequences of refusing to expand Medicaid and we will translate our learnings from the best practices of Medicaid enrollment to our year round effort to help more Americans access health care everyday.