April 8, 2014 at 9:56 AM ET by Katherine Vargas
Twitter Facebook Email
Summary:
President Obama and Vice President Biden participate in a ceremonial swearing-in ceremony for Maria Contreras-Sweet as the new Administrator of the Small Business Administration 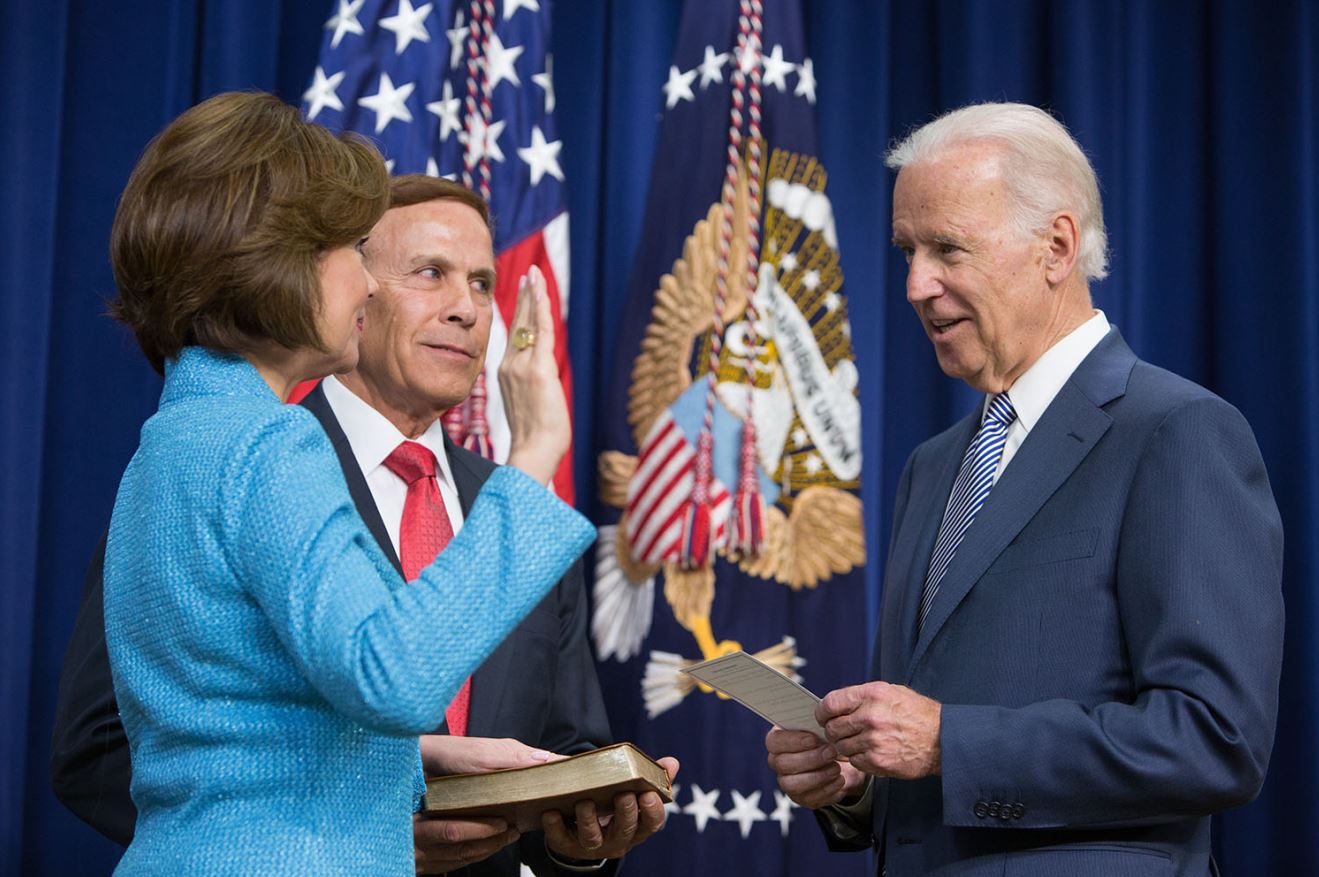 Yesterday, at the White House, President Obama and Vice President Biden participated in a ceremonial swearing-in ceremony for Maria Contreras-Sweet as the new Administrator of the Small Business Administration (SBA). Mrs. Contreras-Sweet is an excellent choice to lead the SBA, having served at high levels in both the public and private sectors.  Mrs. Contreras-Sweet served as the first Latina cabinet secretary in the history of California, oversaw one of the largest state government agencies in the country, and built a successful bank dedicated to serving traditionally underserved Latino communities from scratch.

America’s small businesses are vital for the creation of expanding opportunities for the middle class, including thousands of Latinos. Mrs. Contreras-Sweet has served a critical role in ensuring that entrepreneurs and small businesses have access to the capital they need to start and grow their businesses in both the public and private sectors. Small businesses will continue to add good paying middle-class jobs, help grow the economy, and create opportunities for hard-working Americans in the coming years.

Small businesses are on the front lines transforming an economy focused on speculating, spending, and borrowing to one constructed on the solid foundation of educating, innovating, and building, which is critical to America’s success in the 21st century. Today, as the economy continues to grow, businesses have created 8.7 million jobs in the past four years and small business will continue to be a critical factor in that growth.

As Secretary of the Business, Transportation, and Housing Agency for California, she managed an approximately $12 billion budget, oversaw a workforce of over 40,000 and numerous state-wide departments. Mrs. Contreras-Sweet founded ProAmerica Bank – a bank focused on serving small and mid-sized businesses and the first Latino-owned business bank in California in over 30 years. Previously, Mrs. Contreras-Sweet served as Vice President for Public Affairs at Seven Up and co-founded Fortius Holdings. With decades of experience, Mrs. Contreras-Sweet has seen first-hand the business potential in the Latino community and nurtured it. Hispanics start businesses at 3 times the national average and contribute over $468 billion to the American economy. This keen understanding of the intricacies between the co-existence of business and government through her extensive experience in the small business and Latino communities allows her to hit the ground running at the new SBA Administrator.

Mrs. Contreras-Sweet is the second Hispanic in the President’s second-term cabinet, and the eighth woman in his current Cabinet. Mrs. Contreras-Sweet knows first-hand the challenges that small businesses face and has an established reputation as a fierce advocate for them. With her new role as SBA Administrator she will ensure that small businesses have the seat at the table they deserve. During her nomination in January, President Obama said, “I’m confident that she’s going to put her heart and soul into making sure that all the other people who are out there striving and trying to achieve their dreams can succeed as well.” Mrs. Contreras-Sweet also reminds us that in America, you can make it if you try. Mrs. Contreras-Sweet came to the United States at age 5 with her mother and five brothers and sisters. She didn’t speak a word of English and while growing up, she watched her mother work long and dangerous hours in a chicken packaging plant so that someday her children could work in an office. Mrs. Contreras-Sweet is living proof that with that kind of hard work and determination you can succeed. Today, we welcome SBA Administrator Maria Contreras-Sweet, who brings a wealth of public and private sector experience, and look forward to the great work ahead.