April 10, 2014 at 5:56 PM ET by Rumana Ahmed
Twitter Facebook Email
Summary:
Last Thursday, parents, youth, advocates and community and national leaders came together from across the country at the White House to honor nine Champions of Change who have dedicated their lives to innovative approaches to reduce gun violence and make our communities safer.

Last Thursday, parents, youth, advocates and community and national leaders from across the country came together at the White House to honor nine Champions of Change who have dedicated their lives to innovative approaches to reduce gun violence and make our communities safer.

One of the honorees, Mark Barden, became an outspoken advocate for gun law reform after his 7-year-old son was killed at Sandy Hook Elementary School. At the event, Mr. Barden held a photo of his family, which included all three of his children, and shared that, like many across the nation, gun violence did not become a real issue for him until it hit home. He explained that the loss of his son was a turning point in his life, and he has now dedicated his life to make sure no one else has to face this pain.

Each of the attendees had a personal motivator for their hard work. Reverend Glenn Grayson was motivated by the murder of his 18-year old son, and explained that he used that tragedy as a source of empowerment to show youth that they can make more of their lives than what the media, community, or society presents to them.

Pamela Simon, Community Outreach Coordinator for Congresswoman Gabrielle Giffords, also shared her story as a survivor. On January 8, 2011, while staffing the Congresswoman, Pam was shot in the arm and the chest. She shared with the audience that, “those bullets hit Democrats and Republicans alike,” and that the rift between both parties on this issue is a detriment and danger to this nation.

Each of these champions used their personal motivations and exposures to tragedies at the hands of irresponsible weapons use as a force of change in their communities. From creating organizations to rallying local, faith-based, or educational communities, these Champions of Change used their resources and voices to implement change across the United States for a more secure and responsible political, educational, and social environment for our children.

Read more about them and share their stories here. 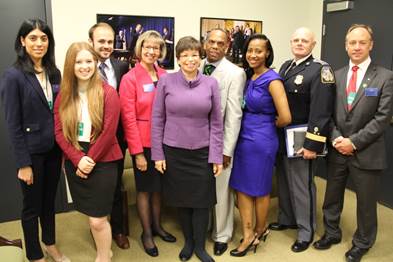 Rumana Ahmed is the Executive Assistant to the Director of the Office of Public Engagement.