On Earth Day, a Commitment to Climate Action

April 22, 2014 at 10:30 AM ET by John Podesta
Twitter Facebook Email
Summary:
On this Earth Day, Administration officials will be joining Americans around the country to talk about our environmental and climate challenges. 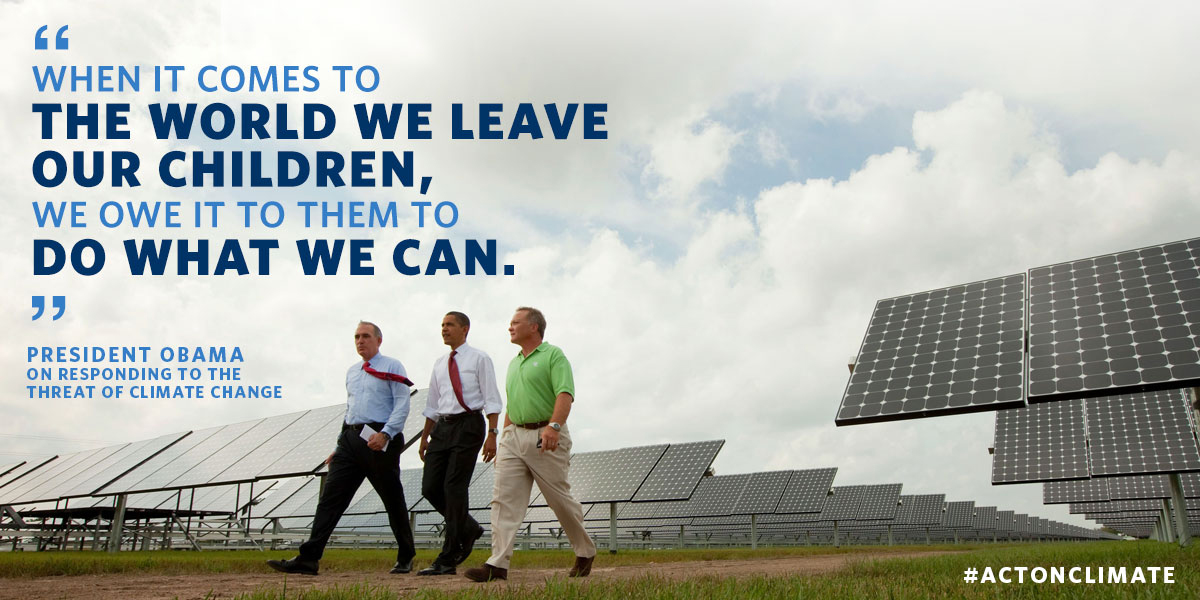 Forty-five years ago, an oil well being drilled off the coast of Santa Barbara, California blew out. At the time, it was the worst oil spill in U.S. history. Forty-five years ago, too, the Cuyahoga River in Cleveland, Ohio, caught fire—again. Cities from New York to Philadelphia to Los Angeles were regularly blanketed in harmful smog.

One year later, inspired by the bipartisan efforts of Democratic Senator Gaylord Nelson and Republican Congressman Pete McCloskey, 20 million Americans took part in the first Earth Day demonstrations. Across the country, people gathered in the streets, in parks, and on college campuses to call for air, water, and wildlife protections. The strength of Americans’ convictions led to the creation of the Environmental Protection Agency and the passage of the Clean Air Act, the Clean Water Act, and the Endangered Species Act. As a result, our air is safer to breathe, our water is safer to drink, and more of our natural resources are protected for future generations.

Earth Day is as important now as it was then. Our health, our economy, our security, and our planet’s future are once again threatened by pollution and environmental degradation.

Our climate is changing, and that change is being driven by human activity. Every year, the United States pumps millions of tons of carbon dioxide pollution and other greenhouse gases into the atmosphere. Recent reports from the Intergovernmental Panel on Climate Change reinforced that these emissions will have devastating effects on our planet, from higher average global temperatures to sea level rise to more severe weather.

That’s why last year President Obama announced the Climate Action Plan, an ambitious strategy to reduce greenhouse gas emissions, to better prepare our communities for the impacts of climate change we can’t avoid, and to lead on the international stage in addressing this global challenge.

On this Earth Day, Administration officials will be joining Americans around the country to talk about our environmental and climate challenges. Secretary of Energy Ernie Moniz and EPA Administrator Gina McCarthy will be at the New England Aquarium talking about what climate change will mean for Boston Harbor. Secretary of Agriculture Tom Vilsack is at Drake University in Des Moines, discussing how climate change is going to impact our farms and our food supply.

And because Earth Day is about taking action, Secretary of Education Arne Duncan and Mike Boots, the Acting Chair of the White House Council on Environmental Quality, are announcing the names of schools across the country that have done the most to reduce their environmental impact. These Green Ribbon Schools are leaders in promoting energy efficiency and in educating their students and their communities about climate change and the environment.

We must all do our part to confront the dangers of climate change and to forge a healthier, greener, better world for our children—not just on Earth Day, but every day.