April 28, 2014 at 11:34 AM ET by John Podesta
Twitter Facebook Email
Summary:
John XXIII and John Paul II defined what it meant to be Catholic in the 20th century. Their influence and their example as men of humility, compassion, service, and faith provide profound lessons to people around the world. 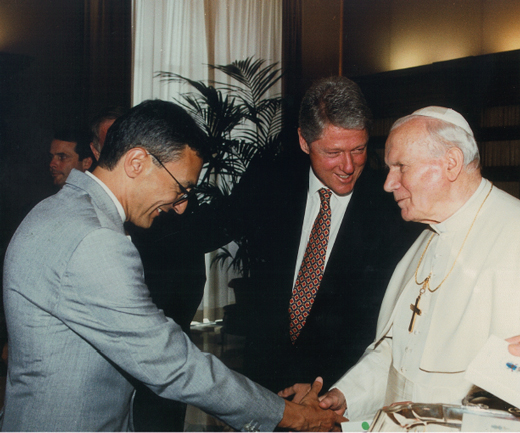 John Podesta meets Pope John Paul II on June 2, 1994 when Mr. Podesta served as Staff Secretary to President Clinton, during the first of his two presidential visits to Vatican City.

I am writing from Rome, where Congressman Xavier Becerra, the President’s Director of Legislative Affairs Katie Beirne Fallon, and I had the honor of serving as the Presidential Delegation to the Holy See. Yesterday, we, along with U.S. Ambassador to the Holy See Kenneth Hackett and his wife Joan, attended the historic canonization Mass for Pope John XXIII and Pope John Paul II at the Vatican.

In different ways, John XXIII and John Paul II defined what it meant to be Catholic in the 20th century. Their influence and their example as men of humility, compassion, service, and faith provide profound lessons to people around the world.

Pope John XXIII took leadership of the Church around the time I took my First Communion, at St. Edward’s Parish on the Northwest Side of Chicago. Seventy-six years old when he was elected, there were few who imagined the former Angelo Giuseppe Roncalli as a revolutionary. But the man we know today as il Papa buono, the Good Pope, was not content to let the Church go on as it always had.

By convening the Second Vatican Council, Pope John XXIII built a radically more inclusive Catholic Church, and he himself became a symbol of change and of the power of faith. John spoke to the faithful in simple terms, and addressed his last encyclical, Pacem in Terris — Peace on Earth — to “all men of good will.” The Second Vatican Council drove profound changes in the practice of the Catholic faith. Because of Pope John XXIII, the Mass is celebrated in vernacular languages, rather than in inaccessible Latin. Because of Pope John XXIII, the priest faces his congregation during services. These aren’t cosmetic changes. They go to the heart of how millions of people practice their faith, and profoundly impact how they feel about their lives.

Where Pope John XXIII brought the laity deeper into the heart of the Church, Pope John Paul II helped bring the Church to the world.  During his long papacy, John Paul visited 129 countries and touched the hearts of millions, and particularly inspired and deepened the faith of young people around the world. From his fight against Communism to his outspoken opposition to apartheid to condemning the Rwandan genocide, Pope John Paul II was a courageous and outspoken leader.

As a Catholic, and as an American, it has been a deeply humbling experience to be in Rome for the canonization Mass. It was an amazing, breathtaking moment to be 100 feet from Pope Francis as he embraced Pope Benedict at the beginning of the Mass. It seems appropriate, upon reflection, that it was Pope Francis who canonized both John and John Paul. As the first pope from the Southern Hemisphere, Pope Francis has inspired people around the world with his inclusiveness, his conviction, and his deep and profound care for the neediest among us. As the first Jesuit Pope, he is truly a man for others. I had the honor of being received by the Pope, shaking his hand, exchanging a few words and basking in his broad smile. It is a memory I will forever carry deep in my heart.