May 1, 2014 at 5:03 PM ET by David Hudson
Twitter Facebook Email
Summary:
The President welcomes America's teachers of the year to the White House, and honors the 2014 National Teacher of the Year, Sean McComb.

This afternoon, in the East Room of the White House, President Obama welcomed the 2014 National Teacher of the Year and state finalists — a group that he called "phenomenal," and "the best of the best."

After emphasizing the significant role that teachers play in our society, the President honored the National Teacher of the Year, Sean McComb.

Sean, a teacher at Patapsco High School and Center for the Arts in Baltimore, works with students in a program called Advancement Via Individual Determination (AVID) — a college-readiness program aimed at capable students who just need that extra push.

98 percent of the students in AVID's last two graduating classes were admitted to a four-year college, and earned more merit scholarship money than the rest of the school's graduating class combined.

The President praised Sean for his commitment to his students, and reiterated how influential teachers are in the lives of our children:

There’s an image from Sean’s application essay that captures what he and all the teachers here are trying to accomplish. Every child has an invisible chalkboard attached to their hearts and minds that they carry with them through their lives. Some people they meet write messages of love and support. Some leave messages of negativity and doubt. It’s a teacher’s job to erase the negative messages and fill those boards with caring words, and inspire confidence and strengthen values. Now, some of today’s students might not even know what a chalkboard is anymore — but they do know that what a teacher gives them stays with them for a lifetime, because teachers matter.

After receiving the award, Sean thanked President Obama and Secretary of Education Arne Duncan for their commitment to education, and remarked on why teaching is so important to him:

I became a teacher because I had incredible teachers who were able to shine a light of hope and possibility into a dark time in my life. Teaching is my calling to do that for others, and an opportunity to spend my career living purposefully — helping children fulfill the promise of their lives. 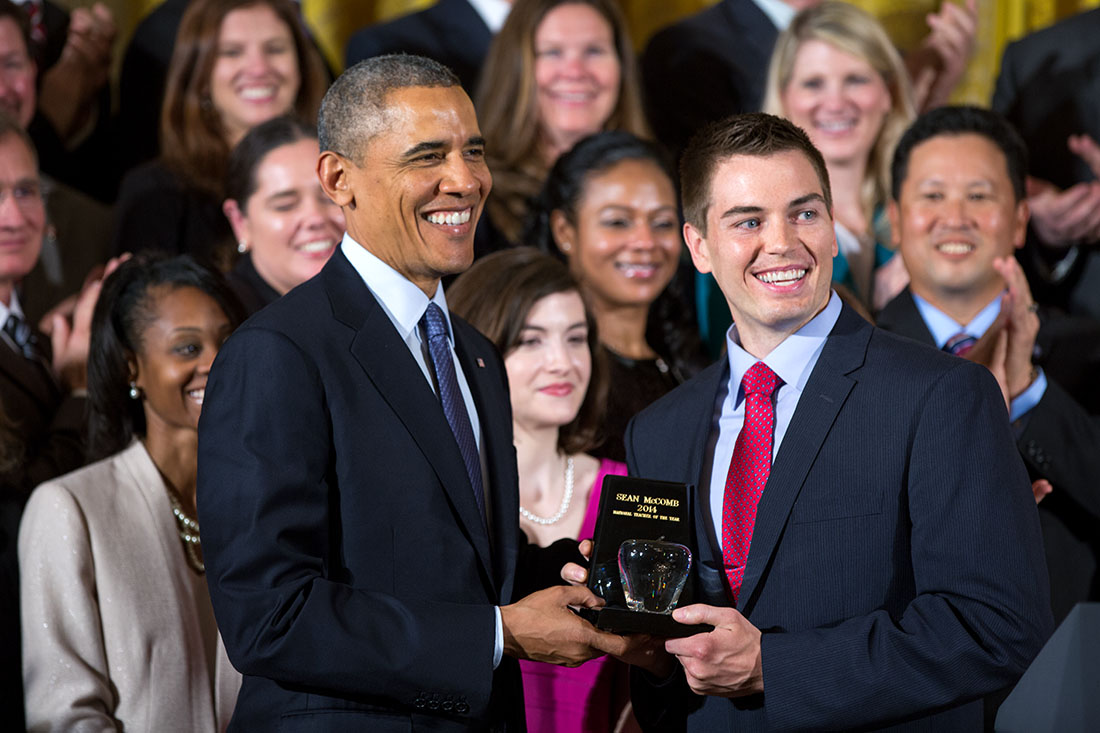 President Barack Obama honors Sean McComb, National Teacher of the Year, and finalists in the East Room of the White House, May 1, 2014. (Official White House Photo by Pete Souza)