May 2, 2014 at 9:26 AM ET by Jason Furman
Twitter Facebook Email
Summary:
Employment growth was solid in April, as businesses added jobs for the 50th consecutive month, and the unemployment rate fell.

Employment growth was solid in April, as businesses added jobs for the 50th consecutive month, and the unemployment rate fell. The employment data can fluctuate from month-to-month, and while this month’s report happens to be above expectations, it is still broadly consistent with the recent trends we have been seeing in the labor market. The President continues to emphasize that more can and should be done to support the recovery, including acting on his own executive authority to expand economic opportunity, as well as pushing Congress for additional investments in infrastructure, education and research, an increase in the minimum wage, and a reinstatement of extended unemployment insurance benefits. In fact, CEA estimates that because of the failure to continue extended benefits into 2014, the economy has already incurred the loss of 80,000 jobs so far this year. Failure to reinstate extended unemployment insurance benefits is expected to cost another 160,000 jobs over the balance of the year.

1. The private sector has added 9.2 million jobs over 50 straight months of job growth. Today we learned that total nonfarm payroll employment rose by 288,000 in April, driven by a 273,000 increase in private employment. Job growth in February and March was revised up, so that that over the past twelve months, private employment has risen by 2.4 million, or an average of 198,000 a month. This is slightly faster than the pace of job gains over the preceding twelve-month period (182,000 a month). 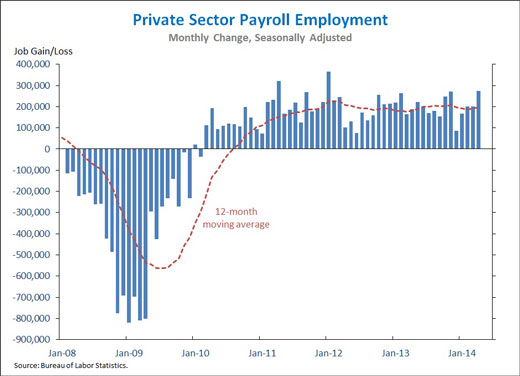 2. The level of April payrolls came in 0.05 percent above expectations—meaning the consensus forecast of the level of payroll employment was extremely accurate. Accounting for the revisions to March, the consensus forecast was for 138,182,000 nonfarm payroll jobs in April, which was only a tiny bit below the actual 138,252,000 nonfarm payroll jobs reported today by the Bureau of Labor Statistics. Of course, the main focus is on the forecast for the change in jobs and in this regard the actual 288,000 jobs added was 32 percent higher than the consensus forecast of 218,000 jobs, a substantial prediction error. Forecasting the change in jobs is very difficult because anything that adds or subtracts just 0.05 percent to total jobs shows up as a 70,000 job swing that appears as a large difference from the consensus forecast, but actually may just be a transitory fluctuation, statistical sampling noise, or quirks in seasonal adjustment. That is why it is best to focus on the trend in jobs over longer periods of time as well as a range of other economic data. 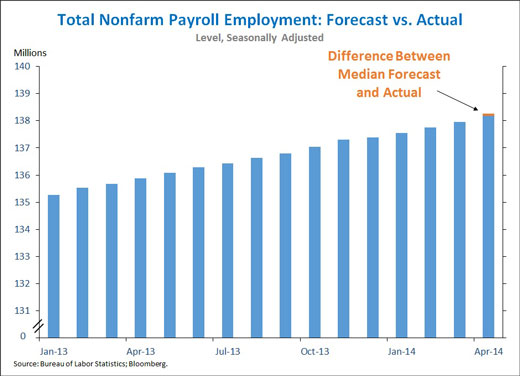 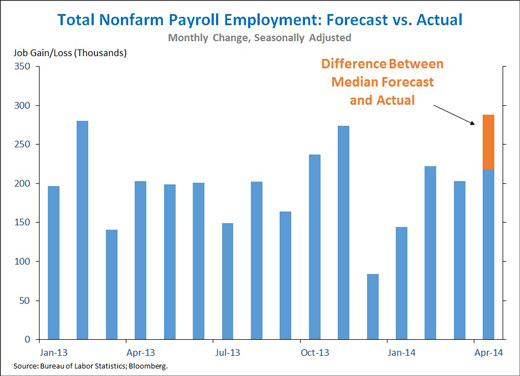 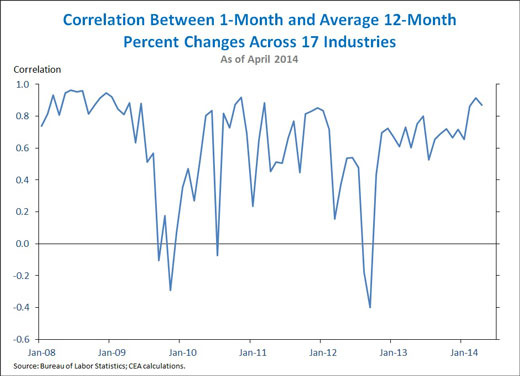 5. Looking over the 50 straight months of private-sector job growth since March 2010, the 273,000 increase in private employment in April represents the 3rd strongest single month of job growth during this time. Construction rose by 32,000 in April, its 5th strongest month since March 2010. Over the last four months alone, the construction sector has added 124,000 jobs. Manufacturing added 12,000 jobs in April, in line with the average monthly gain over the last 50 months, during which time manufacturing employment has risen by 647,000. 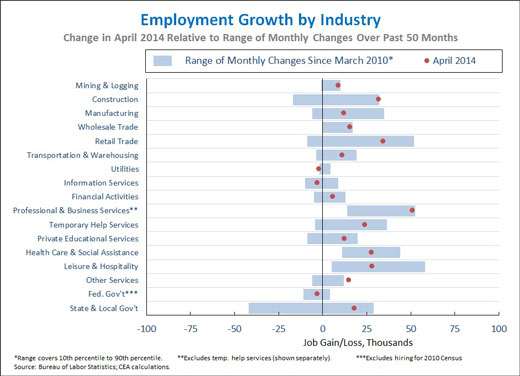