For Cinco de Mayo, President Obama Focuses on Investing in "100,000 Strong in the Americas"

May 6, 2014 at 6:29 PM ET by Ben Rhodes
Twitter Facebook Email
Summary:
President Obama joins Under Secretary of State Richard Stengel, Assistant Secretary Roberta Jacobson, Assistant Secretary Evan Ryan, foreign government officials, business leaders, and academics to discuss how we can work together to advance "100,000 Strong in the Americas," an initiative focused on expanding educational opportunity and exchange to build connections between the people of the Americas, and to make our region more competitive. 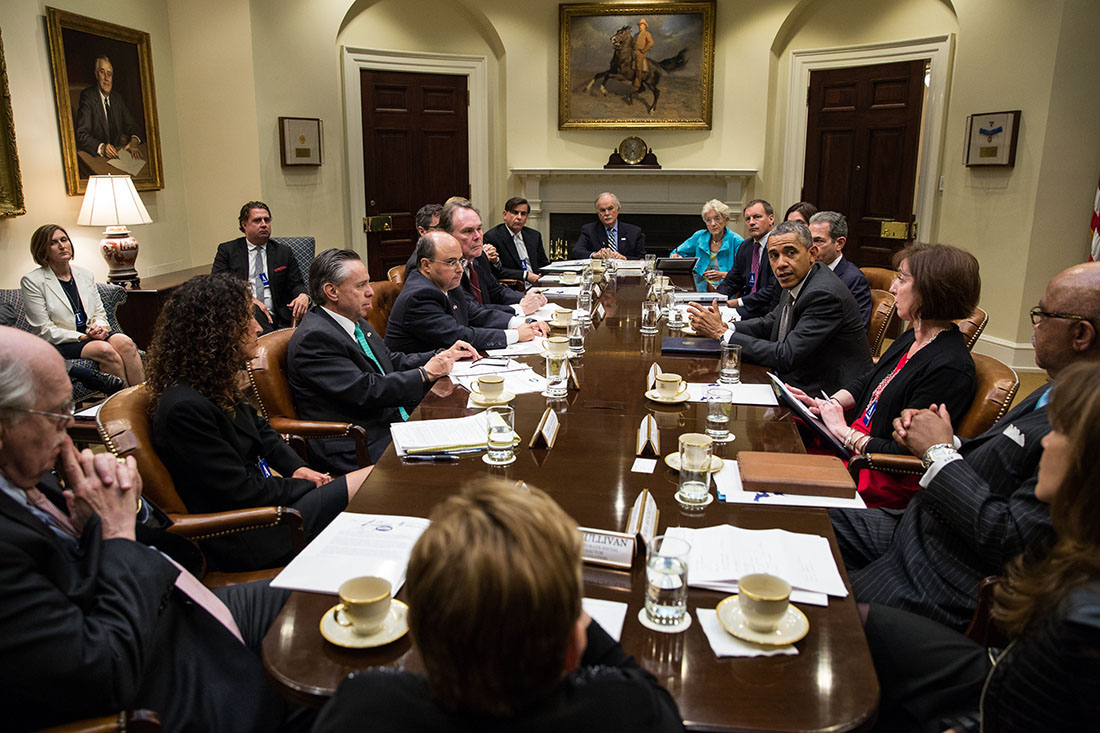 President Barack Obama drops by a 100,000 Strong in the Americas education roundtable in the Roosevelt Room of the White House, May 5, 2014. (Official White House Photo by Pete Souza)

Yesterday, on Cinco de Mayo, President Obama joined Under Secretary of State Richard Stengel, Assistant Secretary Roberta Jacobson, Assistant Secretary Evan Ryan, foreign government officials, business leaders, and academics in the Roosevelt Room of the White House to discuss how we can work together to advance "100,000 Strong in the Americas," an initiative focused on expanding educational opportunity and exchange to build connections between the people of the Americas, and to make our region more competitive.

President Obama launched 100,000 Strong in the Americas to meet the target of bringing 100,000 students to the United States to study each year, while also increasing the number of Americans studying abroad in the hemisphere to 100,000. He did so out of a belief that greater educational opportunity and exchange will serve the interests of all our countries – developing new skills, increasing employment opportunities, building bridges across borders, and ultimately improving relations between the United States and our neighbors.

Educational exchange is increasingly a gateway for more than cultural understanding – it also helps open doorways to new opportunities for employment and economic growth. As the need to ramp up exchanges grows, we are supplementing our traditional government-backed efforts to support scholarship programs, with new initiatives that use the convening power of the U.S. government to leverage resources that enable individuals and organizations to connect, communicate, and collaborate.

The group discussed how the private sector is playing an increasingly important role by investing in international education. By working together with private sector and academia, we can continue building to scale an exchange program that draws on the unparalleled attributes of our colleges and universities, while ensuring that our educational initiatives help develop the skills that can lead to employment and increased competitiveness. Moreover, exchanges can further illuminate the values and aspirations that people share across the Americas. To that end, the participation of the Hemisphere’s leading academic and private sector partners is essential to the success of 100,000 Strong in the Americas.

President Obama has discussed this initiative with key partners in the region, including President Peña Nieto of Mexico and President Humala of Peru, and they were represented at the meeting by Undersecretary Sergio Alcocer of Mexico, Ambassador Medina Mora of Mexico, and Ambassador Forsyth of Peru, who shared their commitment to this effort.

Leaders in academia from Partners of the Americas, the Association of Public and Land-Grant Universities, the American Association of Community Colleges, and NAFSA talked about how to increase exchanges across the Americas, which lag behind our exchange programs in Asia. The President also heard from business leaders including Sempra Energy, UPS Foundation, Qualcomm, The National Geographic Society, Fundacion Televisa, and Caterpillar Foundation about their growing demand for a highly skilled and educated workforce that can thrive in the global economy.

Later, at the Cinco de Mayo reception hosted in the East Room of the White House, President Obama spoke publicly about his vision for educational exchanges in the Americas:

Education helps us find new frontiers for collaboration between the United States and Mexico, and throughout the hemisphere. That’s why I launched the "100,000 Strong in the Americas" initiative to significantly increase educational exchanges among our countries. And I just came from a discussion with leaders in business and education who see these exchanges as key to maintaining their competitive advantage. They understand that if we're serious about building a 21st century workforces, then we’re going to have to build knowledge and relationships that reach across borders. And that’s how we’re going to create new jobs and develop new markets, explore new ideas, and unleash the hemisphere’s extraordinary opportunity.