May 13, 2014 at 7:00 PM ET by David Hudson
Twitter Facebook Email
Summary:
The President awarded Kyle J. White, a former active-duty Army Sergeant, the Medal of Honor during a ceremony at the White House. Sgt. White received the medal for his courageous actions during combat operations against an armed enemy in Nuristan Province, Afghanistan on November 9, 2007.

This afternoon, President Obama awarded Sgt. Kyle J. White, a former active-duty Army Sergeant, the Medal of Honor during a ceremony at the White House. Sgt. White received the medal for his courageous actions during combat operations in Nuristan Province, Afghanistan.

On the afternoon of November 9, 2007, Sgt. White and the 13 members of his team left a meeting in an Afghan village and headed back up a steep hill, into an area that was known as "ambush alley."

"That's when a single shot rang out," President Obama said. "Then another. And then the entire canyon erupted, with bullets coming from what seemed like every direction."

Sgt. White emptied a full magazine as his platoon returned fire against the ambush. But while reloading, an explosion from an enemy grenade knocked him unconscious. When he came to, his face was pressed against a rock -- and soon after, enemy fire hit another rock close to his head, sending shrapnel and rock shards across Sgt. White's face.

Yet in the middle of this danger, Sgt. White's heroism and selflessness were made evident, as the President detailed in the rest of his remarks.

Most of the unit had been forced to slide down the cliff to the valley below.  But Kyle saw a teammate -- Specialist Kain Schilling -- trying to treat his own shattered arm, using a tree as cover -- what Kain later called “the smallest tree on Earth.”  I’m sure that’s how it felt.  Kyle sprinted through enemy fire to Kain’s side and began applying a tourniquet -- shielding Kain with his own body as gunfire shredded that tree.

Then Kyle saw another man down -- Marine Sergeant Phillip Bocks -- in the open, 30 feet behind them, but too injured to reach cover.  Kyle remembers thinking, “It’s just a matter of time before I’m dead.  If that’s going to happen, I might as well help someone while I can.”

With bullets impacting all around him, Kyle ran to Bocks and began to pull the injured Marine to cover.  But worried that he’d expose Bocks to more gunfire, Kyle retreated.  The enemy rounds followed him.  He ran out again, pulling Bocks a little farther.  And once more he retreated to distract the enemy fire.  Once more he went out -- over and over thinking to himself, “I’m not going to make it.”  Kyle could feel the pressure of the rounds going by him.  But somehow, miraculously, they never hit him.  Not once.  One of his teammates said it was as if Kyle was moving “faster than a speeding bullet”.

And finally, Kyle succeeded in pulling his comrade to cover.  Tragically, there on that cliff, Sergeant Bocks succumbed to his wounds.  But in his final moments, this American Marine surely found some solace in Kyle White -- the American soldier who, until the very end, was there by his side.

Now, that other injured soldier, Kain Shilling, was still out there.  And he had sustained another injury, this time to his knee.  Kyle ran out once more to Kain’s side.  Kyle ripped off his own belt for a tourniquet, and soon got his hands on a working radio.  The voice of Charlie One Six Romeo came into base.  Crouching behind that lone tree, Kyle began calling in airstrikes to take out enemy positions.

Kyle stayed with Specialist Schilling as night fell.  And Kain was too badly injured to move.  Kyle was starting to feel the fog of his own concussions set in, but he knew that he was Kain’s best chance to get out alive, so Kyle took charge and ordered the Afghan soldiers to form a security perimeter.  He called in a MEDEVAC and made sure Kain and the other injured were safely on board.  And only then did Kyle finally allow himself to be lifted out.

As the helicopter pulled away, Kyle looked out the window, watching the darkness as they pulled away from that single tree on the cliff.  “When you’re deployed,” he later said, “those people become your family.  What you really care about is:  I want to get this guy to the left and to the right home.”

But Sgt. White's story didn't end there. The President remarked on Sgt. White's reintegration into society after completing his service, explaining how he went to college with the help of the Post-9/11 GI Bill, received his degree, and now works for a bank in Charlotte, North Carolina.

Kyle, members of Chosen Company, you did your duty, and now it’s time for America to do ours: after more than a decade of war, to welcome you home with the support and the benefits and opportunities that you’ve earned.  You make us proud, and you motivate all of us to be the best we can be as Americans, as a nation; to uphold our sacred obligations to your generation and all who have faced that “measure of danger” and “the willingness to incur it.”

May God bless you, and may your courage inspire and sustain us always.  And may God continue to bless the United States of America. 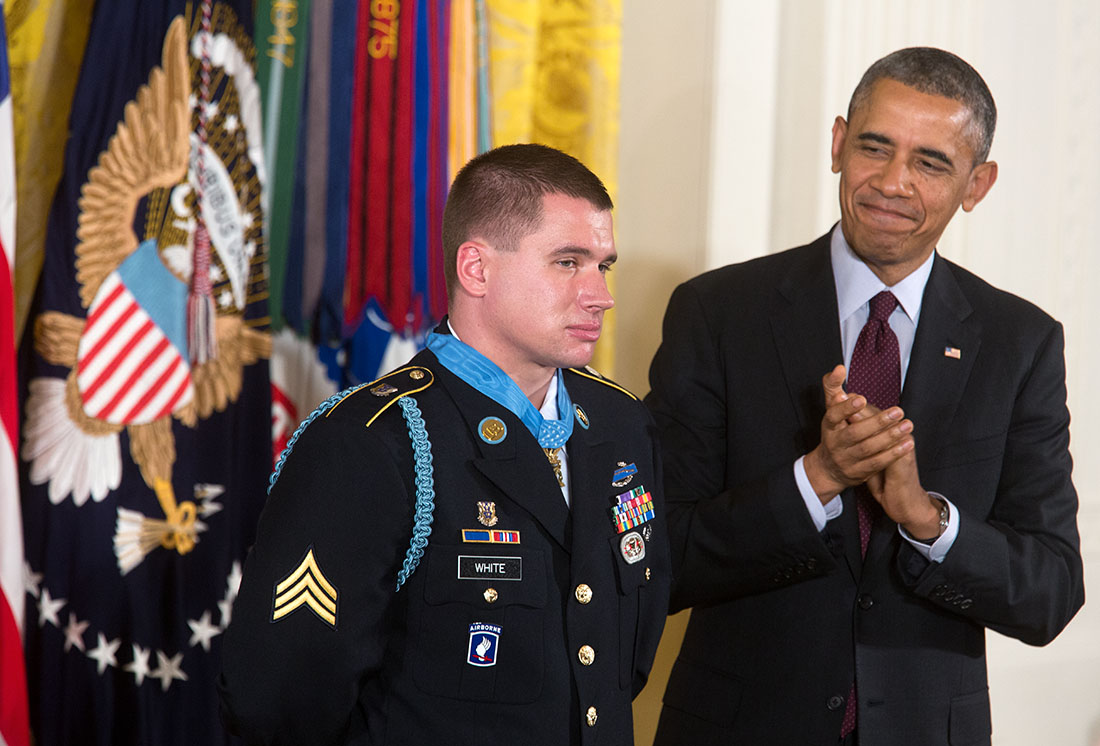 President Barack Obama applauds Sergeant Kyle J. White after awarding him the Medal of Honor during a ceremony in the East Room of the White House, May 13, 2014. (Official White House Photo by Chuck Kennedy)