Our two nations are forever bound by our shared history and our shared values, and every American dollar spent on Israel's security is an investment in protecting the many interests that our nations share—whether that's preventing rockets from terrorizing the Israeli people, defending against the growing ballistic missile threat in the region, or advancing our commitment to defend freedom and democracy. 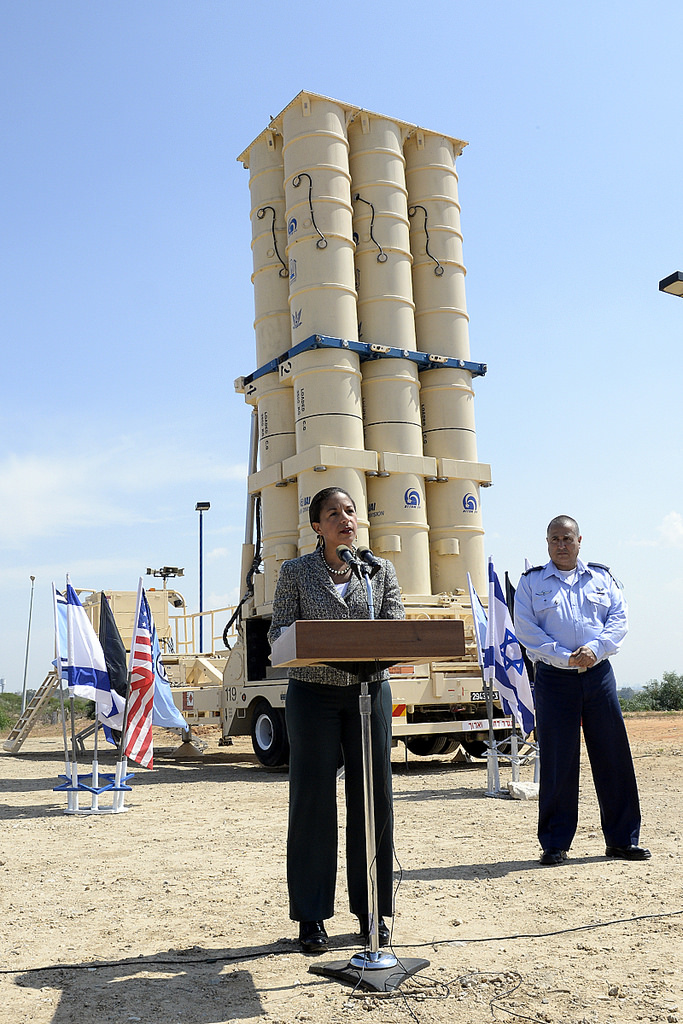 Her full remarks at Palmachim Air Force Base can be found here.

Ambassador Rice also met with President Mahmoud Abbas of the Palestinian Authority in Ramallah during her visit. As she did in her meetings with Israeli officials, she emphasized the importance of each side managing the current situation in a way that reduces tensions and preserves space to pursue a two-state solution when both parties are prepared to take the decisions necessary to resume substantive negotiations. While we have come to a pause in the parties' talks, the United States believes the only way to achieve lasting peace is through direct Israeli-Palestinian negotiations that lead to two viable, independent states living side-by-side in peace and security. 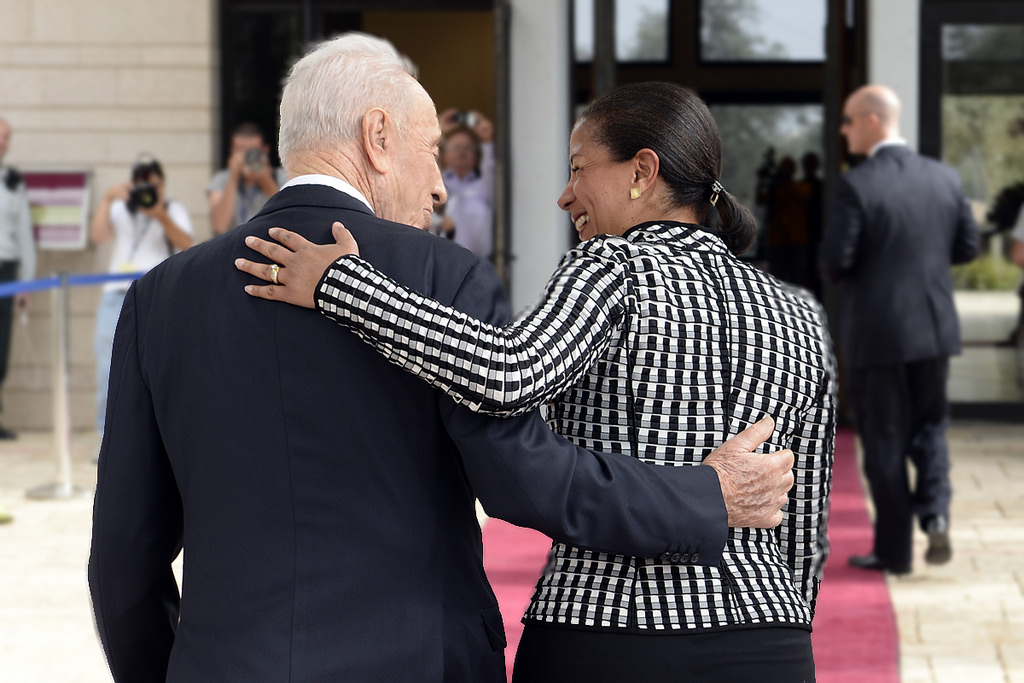 Upon returning to Washington, Ambassador Rice delivered remarks at the annual Israel Independence Day Celebration hosted by the Embassy of Israel at the Mellon Auditorium. Her full remarks as prepared, marking the State of Israel's 66th birthday, follow:

Good evening everyone—erev tov—and happy Independence Day. This year, I've been fortunate to mark Yom Ha'atzmaut both here and in Israel, on my first trip there as President Obama's national security advisor.

I want to thank Ambassador Dermer for inviting me to join the party today. Ron and I have spent many hours together recently. I made Ron—I think this is the right verb—schlep to Israel for my trip last week. Along with many of the most senior officials from both our countries, we had busy days of close and productive consultations.

My most important meeting, once again, was with Prime Minister Netanyahu. In my previous job, we worked side-by-side in the muddy trenches of New York over the deeply flawed Goldstone Report and many other fights to protect Israel's legitimacy in UN forum after UN forum. On this, my most recent trip, I was proud to reaffirm and deepen the unprecedented security cooperation between our countries, and the prime minister and I had a very constructive conversation on a range of important issues.

I was also pleased, once again, to spend time with my Israeli counterpart, National Security Adviser Yossi Cohen— as well as with one of Israel's national treasures and one of the world's global treasures, President Shimon Peres. I know President Obama is looking forward to welcoming him back to the White House next month for the umpteenth time since his first visit to the White House under President Kennedy. To both your prime minister and your president, on behalf of the United States, I reiterated President Obama's personal and unwavering commitment to Israel's peace and security.

It was an excellent visit—and just the latest in a series of memorable visits to Israel. In particular, I was privileged to join President Obama, then still Senator Obama, on his visit to Israel in 2008—and I still remember the look of grim determination on his face when we saw the countless stacks of rockets that Hamas terrorists had fired from Gaza on the civilians of Sderot.

But the trip I remember most vividly, the one that forever sealed my affection for Israel, was my very first visit—back when I was 14 years old. My late father sat on the board of TWA – some of you will remember such airlines only from the "Mad Men" era. So, my Dad was able to take me and my younger brother on one of the first-ever flights from Cairo to Tel Aviv just after the Camp David accords. To this day, I remember walking the Old City, visiting the original Yad Vashem, hiking the stony path up Masada, bobbing in the Dead Sea, and learning by heart the Sh'ma, which speaks of God's oneness.

I was particularly moved by President Peres's Independence Day message to the Israeli people this year. Thinking back to 1948 and the newborn state, he said, "I have to admit that our dream was too small when I see the reality that was born out of it." To not just build a state after the horror of the Holocaust, to not just become a free people in an independent and democratic state in the historic homeland of the Jewish people, but to actually exceed even their own dreams—it's a stirring testament to the faith and determination of the Israeli people, passed on l'dor va'dor, from generation to generation.

So, we will stay true to the cause of Israel's security. On Friday, I visited Palmachim Air Force Base and saw brave Israeli men and women, working alongside U.S. officers, using cutting-edge U.S. technology to ensure that Israel's air defenses remain unsurpassed. I got an up-close look at the tremendous Iron Dome and Arrow systems that have saved countless Israeli lives, with a U.S. investment that now totals nearly $900 million.

That commitment to Israeli and U.S. security also means, as we discussed again last week, that Iran must not get a nuclear weapon. As President Obama said in Jerusalem, "America will do what we must to prevent a nuclear-armed Iran." As the United States and our P5+1 partners engage in negotiations with Iran on a long-term, comprehensive agreement that resolves the world's longstanding concerns about Iran's nuclear program, we all have a responsibility to give diplomacy a chance to succeed. But America won't be satisfied by mere words. We will only be satisfied by verifiable action from Iran. Put simply: if we are not, there will be no deal. And, as these negotiations progress, we continue to consult closely with Israel every step of the way.

We will also stay true to the cause of peace — to working to end the conflict between Israelis and Palestinians. Even though we have reached a pause in the negotiations, we continue to encourage the parties to work and act toward a future of peace. It's worthwhile to recall the words of one the great civil rights leaders, Dr. Dorothy Height, who once said, "If the times aren't ripe, you have to ripen the times." So the United States will continue to do our part to help bring about the peaceful, hopeful future that both Israeli and Palestinian children deserve. Because, ultimately, the only path forward out of this tragic conflict is a secure, democratic, Jewish state living side-by-side in peace and security with a viable, independent Palestinian state.

That's our commitment—and it's the mighty oak that grew from the seed planted by President Truman on May 14, 1948, when he recognized the State of Israel, at 6:11 p.m. in Washington—just 11 minutes after David Ben-Gurion declared Israel's independence at midnight in Tel Aviv. The United States was the first country to recognize Israel, and we are still honored to count ourselves as first among Israel's friends. America's commitment to the peace and security of Israel has spanned generations. It spans political parties. And it is not and never will be negotiable.

Together, we reaffirm, in the words of Israel's Declaration of Independence, the "right of the Jewish people to be masters of their own fate, like all other nations, in their own sovereign State"—a state "based on freedom, justice and peace as envisaged by the prophets of Israel." And together, I hope that, decades from now, when we examine our efforts to forge a future of peace and security among Israel and its neighbors, we too will be able to look back at all that has been accomplished and say, with deep satisfaction, "our dream was too small."

Thank you so much.

Matt Nosanchuk is Director of Outreach on the National Security Council