President Obama Speaks at 9/11 Museum Dedication: "A Sacred Place of Healing and of Hope"

May 15, 2014 at 4:01 PM ET by David Hudson
Twitter Facebook Email
Summary:
The National September 11 Memorial & Museum opens its doors to the families of those who lost their lives in the 2001 attacks, as well as the first responders and recovery workers that helped save the lives of others that day. 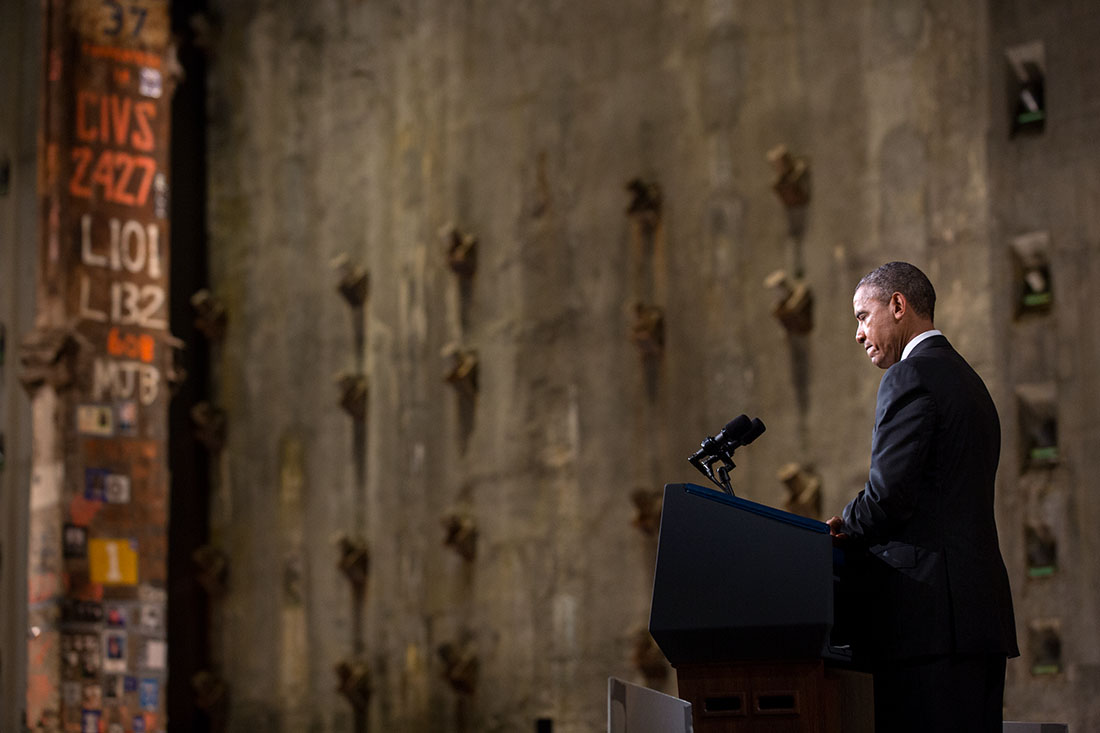 This morning, the National September 11 Memorial & Museum at Ground Zero opened its doors to the families of those who lost their lives in the 2001 attacks, as well as the first responders and recovery workers that helped save the lives of others that day.

At today's dedication of the memorial, following remarks by former New York City Mayor Michael Bloomberg, President Obama spoke about the importance of the memorial, explaining that its construction was a "great undertaking," and that the site is now a "sacred place of healing and of hope."

Here, at this memorial, this museum, we come together.  We stand in the footprints of two mighty towers, graced by the rush of eternal waters.  We look into the faces of nearly 3,000 innocent souls -- men and women and children of every race, every creed, and every corner of the world.  We can touch their names and hear their voices and glimpse the small items that speak to the beauty of their lives.  A wedding ring.  A dusty helmet.  A shining badge.

Here we tell their story, so that generations yet unborn will never forget.  Of coworkers who led others to safety.  Passengers who stormed a cockpit.  Our men and women in uniform who rushed into an inferno.  Our first responders who charged up those stairs.  A generation of servicemembers -- our 9/11 Generation -- who have served with honor in more than a decade of war.  A nation that stands tall and united and unafraid -- because no act of terror can match the strength or the character of our country.  Like the great wall and bedrock that embrace us today, nothing can ever break us; nothing can change who we are as Americans.

In his remarks, the President also told the story of Welles Crowther, a young man who gave his own life in order to save others:

On that September morning, Alison Crowther lost her son Welles.  Months later, she was reading the newspaper -- an article about those final minutes in the towers.  Survivors recounted how a young man wearing a red handkerchief had led them to safety.  And in that moment, Alison knew.  Ever since he was a boy, her son had always carried a red handkerchief.  Her son Welles was the man in the red bandana.

Welles was just 24 years old, with a broad smile and a bright future.  He worked in the South Tower, on the 104th floor. He had a big laugh, a joy of life, and dreams of seeing the world.  He worked in finance, but he had also been a volunteer firefighter.  And after the planes hit, he put on that bandana and spent his final moments saving others.

Three years ago this month, after our SEALs made sure that justice was done, I came to Ground Zero.  And among the families here that day was Alison Crowther.  And she told me about Welles and his fearless spirit, and she showed me a handkerchief like the one he wore that morning.

And today, as we saw on our tour, one of his red handkerchiefs is on display in this museum.  And from this day forward, all those who come here will have a chance to know the sacrifice of a young man who -- like so many -- gave his life so others might live.

"Those we lost live on in us," said the President. "In the families who love them still. In the friends who remember them always. And in a nation that will honor them, now and forever."