May 22, 2014 at 4:38 PM ET by David Hudson
Twitter Facebook Email
Summary:
On what would have been his 84th birthday, Harvey Milk had a stamp dedicated in his honor at the White House. 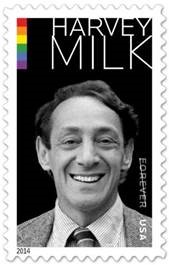 On what would have been his 84th birthday, Harvey Milk had a stamp dedicated in his honor at the White House. A number of distinguished guests attended the ceremony, including U.S. Ambassador to the United Nations Samantha Power, House Democratic Leader Nancy Pelosi, Senator Tammy Baldwin, Representative John Lewis, and Deputy Postmaster General Ronald A. Stroman.

Harvey Milk was a visionary leader who became one of the first openly gay elected officials in the U.S. when he won a seat on the San Francisco Board of Supervisors in 1977. Milk's achievements gave hope and confidence to the lesbian, gay, bisexual, and transgender (LGBT) community in the United States and elsewhere at a time when the community was encountering widespread hostility and discrimination. Milk believed that government should represent all citizens, ensuring equality and providing needed services.

Tragically, his political career was cut short less than a year after he took office in California when he and San Francisco Mayor George Moscone were assassinated on November 27, 1978.

In 2009, President Obama posthumously awarded Harvey Milk with the Medal of Freedom for his courage, exceptional leadership, and dedication to human rights.

That same year, Harvey Milk's nephew, Stuart Milk, sat down to talk about his uncle's legacy:

Find out more about the Harvey Milk Forever Stamp.