May 23, 2014 at 5:15 PM ET by Eric Schultz
Twitter Facebook Email
Summary:
President Obama nominates San Antonio Mayor Julián Castro as the next Secretary of Housing and Urban Development (HUD), and current HUD Secretary Shaun Donovan to serve as the Director of the White House Office of Management and Budget (OMB). 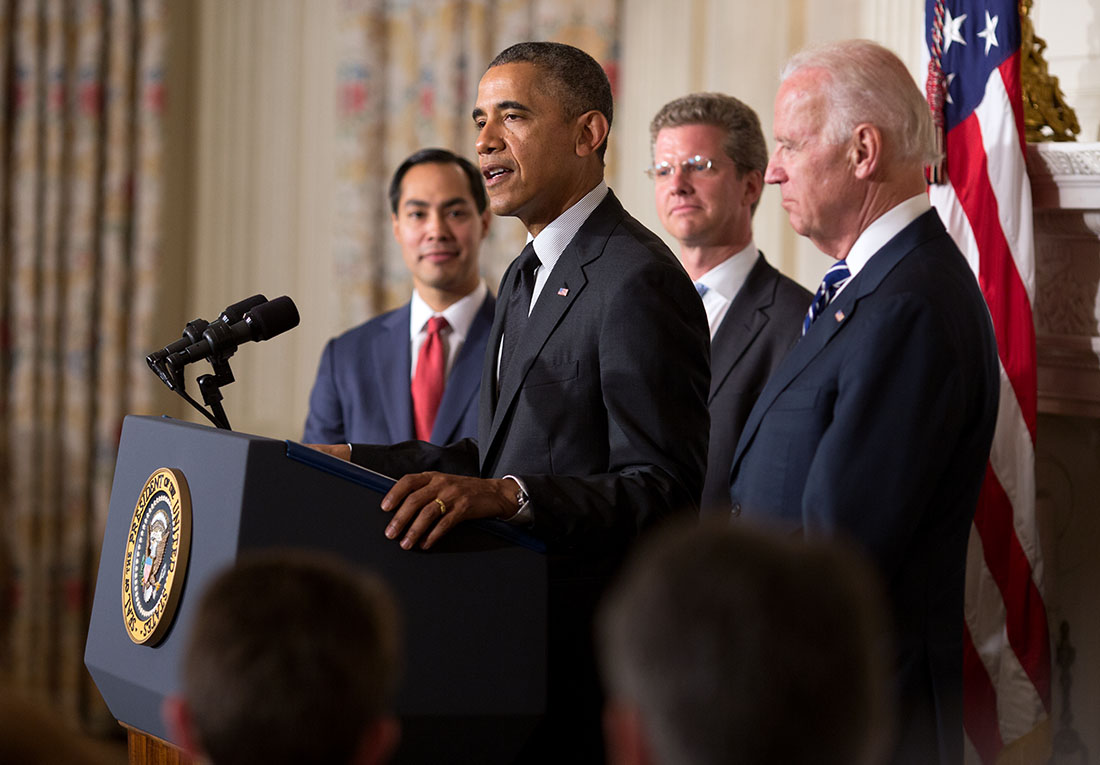 Today, in the White House State Dining Room, President Obama nominated San Antonio Mayor Julián Castro as the next Secretary of Housing and Urban Development (HUD), and current HUD Secretary Shaun Donovan to serve as the Director of the White House Office of Management and Budget (OMB).

Mayor Castro will be an invaluable member of the Obama Administration. In five short years, Mayor Castro has made significant progress in San Antonio and put the city and its citizens on a new trajectory. He has been a leader among mayors in implementing housing and economic development programs that have tremendously benefitted the people of San Antonio. He has also built good relationships with other mayors and key partners in the Administration’s Promise Zones initiative, which spotlights San Antonio as a shining example of a city that has been revitalized over the past few years due in large part to Mayor Castro’s leadership.

We look forward to Mayor Castro bringing his practical, on-the-ground success to scale at the federal level at HUD.

At today’s nomination, the President also highlighted Mayor Castro’s story and how he exemplifies the American Dream:

Julián’s grandmother came to this country from Mexico.  She worked as a maid, worked as a cook, worked as a babysitter -- whatever she had to do to keep a roof over her family’s head.  And that’s because for her, and generations of Americans like her, a home is more than just a house.  A home is a source of pride and security.  It’s a place to raise a family and put down roots and build up savings for college or a business or retirement, or write a lifetime of memories.  And maybe one day the kid grows up in that home and is able to go on to get a great education and become the Mayor of San Antonio, and become a member of the President’s Cabinet.

Julián ha vivido el Sueño Americano.  And it’s precisely because he’s lived out the American Dream that he’ll work his tail off to make sure more people can travel that same path and earn their own dreams as well.

President Obama also believes that Secretary Donovan will make an excellent choice as the new Director of the White House Office of Management and Budget. Donovan has committed his life to public service, focused on good government and smart investment. Under Donovan’s leadership, HUD helped stabilize the housing market and worked to keep responsible families in their homes. In the wake of the foreclosure crisis, Donovan reaffirmed HUD’s commitment to building strong, sustainable, inclusive neighborhoods that are connected to education and jobs and provide access to opportunity for all Americans.

While at HUD, Donovan made critical investments to speed economic growth, while also offering new savings proposals and ensuring fiscal responsibility. Donovan also chaired the Hurricane Sandy Rebuilding Task Force, which developed a comprehensive regional plan, based on local vision for redevelopment, to guide long-term disaster recovery efforts. Donovan has a track record of using data to make good decisions and drive results. In the role, he has become a trusted advisor to the President and partner to other members of the Cabinet.

We are excited to welcome Mayor Castro to the Obama Administration and look forward to Secretary Donovan continuing to serve the American people in his new role at OMB.