Today at the White House, President Obama caught basketballs shot off a hand-built catapult, test drove a remote-controlled search-and-rescue robot, and used his hand to activate an auto-retracting bridge made of Legos – all part of his tour of the 2014 White House Science Fair.

This year’s event brought 100 incredible kids from more than 30 states to participate in a day-long showcase of innovative projects, patent-worthy inventions, and potentially life-saving discoveries made by America’s brightest young minds. The student exhibitors included a young researcher making progress to develop an anti-flu vaccine, an engineer who built an electric car and then raced it in a national competition, a group of girl coders who built an app to help their visually impaired classmate, and multiple teens with patents pending on groundbreaking inventions that could one day save lives. 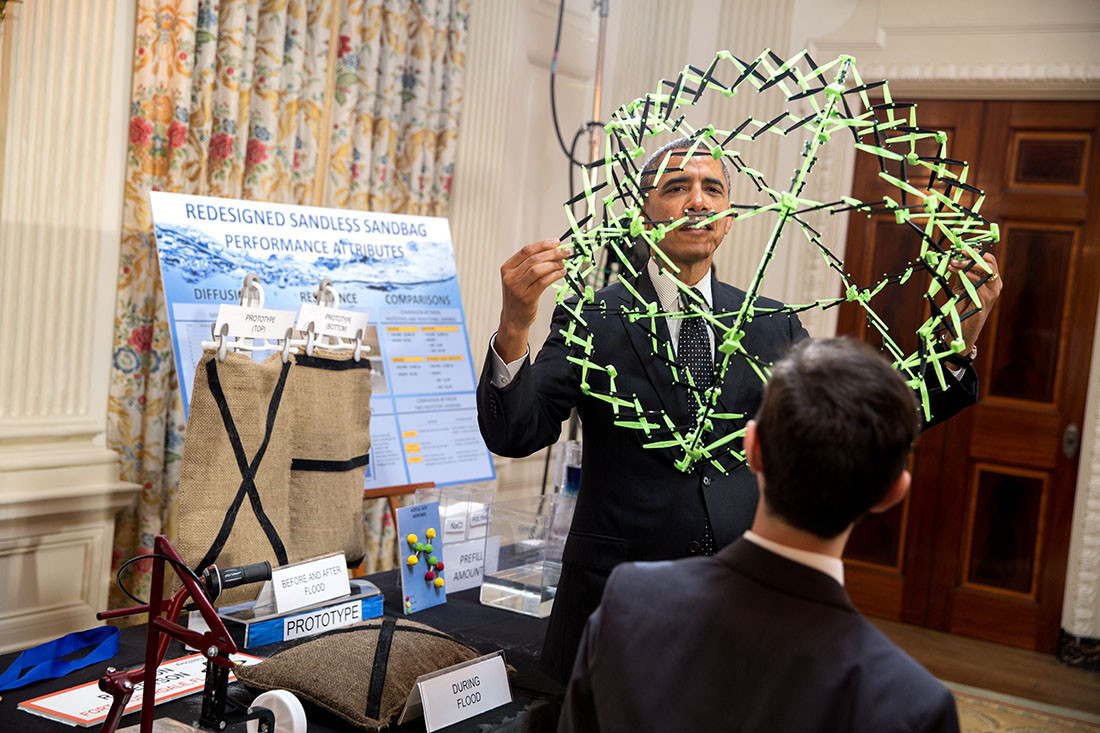 President Barack Obama holds a polymer while talking with Peyton Robertson, 12, about his projects during the 2014 White House Science Fair in the State Dining Room of the White House, May 27, 2014. (Official White House Photo by Pete Souza)

After touring the exhibits, President Obama congratulated the students on their extraordinary accomplishments and announced a number of ambitious new steps to advance his "Educate to Innovate" campaign – an all-hands-on-deck effort to get more girls and boys inspired to excel in STEM. New steps announced today include:

In his remarks, President Obama reminded the audience – which included top Administration officials and notable STEM “celebri-geeks” such as Bill Nye the Science Guy – that “we need to celebrate science fair winners ... at least as much as we do Super Bowl winners." Indeed, the President highlighted many of the young innovators he met earlier in the day, marveling aloud and at length about their inquisitiveness, ingenuity, and ability to help solve some of the grandest challenges of our time.

He also elaborated on the theme of the 2014 White House Science Fair – girls in science, technology, engineering, and math (STEM). “We’re putting a special focus on all the inspiring girls and young women who are excelling in science,” he said, and noted that “fewer than 3 in 10 workers in science and engineering are women ... we've got to change those numbers.”

In keeping with the #GirlsInSTEM theme, earlier in the day, top White House officials including Senior Advisor to the President Valerie Jarrett; John P. Holdren, President Obama’s Science Advisor; and Tina Tchen, Executive Director of the White House Council on Women and Girls, held a roundtable discussion in the Roosevelt Room of the West Wing to meet and chat with some of the young female participants in this year’s White House Science Fair. 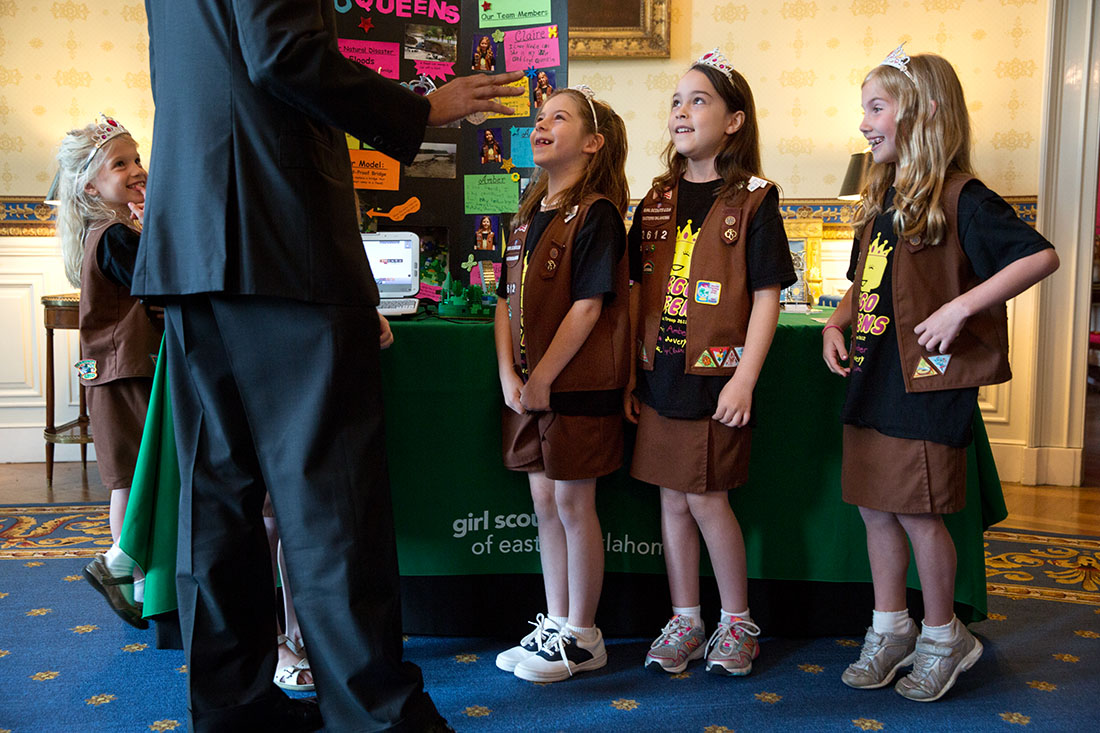 President Barack Obama talks with Brownies from Girl Scout Troop 2612 from Tulsa, Okla., during the 2014 White House Science Fair in the Blue Room of the White House, May 27, 2014. The fair celebrates the student winners of a broad range of science, technology, engineering and math (STEM) competitions from across the country. The girls invented the "Flood Proof Bridge." (Official White House Photo by Pete Souza)

During the lively discussion – which included Kari Byron of the popular TV show "MythBusters" – senior officials shared personal stories about what STEM means to them and their own career pathways, while the girls talked about their passions for science, the challenges they face as young women aspiring to break into the STEM fields, and why they are so excited to participate in this year’s White House Science Fair.

It was a successful day of geeking out here at the White House. We congratulate all of the student participants and attendees at this year’s White House Science Fair and can’t wait to see what new innovations and discoveries are in store as they continue to research, invent, design, make, and build the future.

See some of the tweets about today's Science Fair: