Second Estimate of GDP for the First Quarter of 2014

May 29, 2014 at 10:19 AM ET by Jason Furman
Twitter Facebook Email
Summary:
This GDP revision was due almost entirely to a downward revision to the inventories category, with small upward revisions to consumer spending and business fixed investment being offset by small downward revisions to net exports and state and local purchases. A range of more up-to-date data from March and April provide a more accurate and timely picture of where the economy is today.

Today’s GDP revision was due almost entirely to a downward revision to the highly volatile inventories category, with small upward revisions to consumer spending and business fixed investment being offset by small downward revisions to net exports and state and local purchases. Overall the first quarter was subject to a number of notable influences, including historically severe winter weather, which temporarily lowered growth. A range of more up-to-date data from March and April, including jobs, manufacturing, housing and other indicators, provide a more accurate and timely picture of where the economy is today and show that it continues to recover from the worst recession since the Great Depression. The President will do everything he can either by acting through executive action or by working with Congress to push for steps that would raise growth and accelerate job creation, including fully paid-for investments in infrastructure, education and research, a reinstatement of extended unemployment insurance benefits, and an increase in the minimum wage.

1. Real gross domestic product (GDP) fell 1.0 percent at an annual rate in the first quarter of 2014, according to the second estimate from the Bureau of Economic Analysis. This drop follows an increase of 3.4 percent annual pace in the second half of 2013. Looking at the various components of GDP, consumer spending grew at a rapid pace, mainly reflecting sharp increases in health care and utilities consumption, while the other elements of consumer spending on net rose only slightly. Consumer spending on food services and accommodations fell for the first time in four years, one of several components that was likely affected by unusually severe winter weather. Exports and inventory investment, two particularly volatile components of GDP, also subtracted from growth. 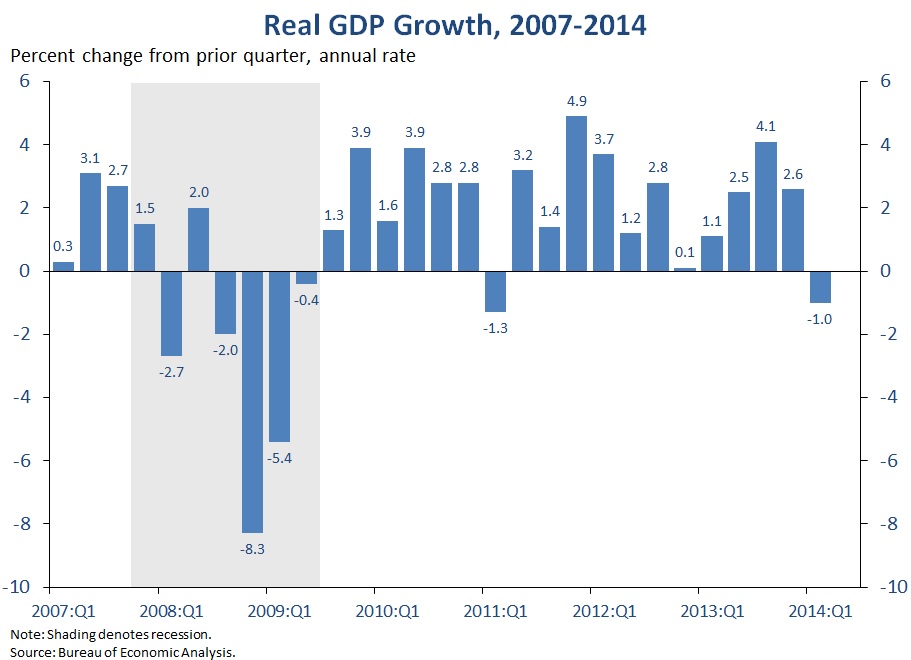 2. The downward revision to real GDP growth was almost entirely due to a downward revision to the volatile inventory investment component; revisions to the other components were small and offsetting. The contribution of inventory investment to growth was revised down a full percentage point, from -0.6 percentage point in the advance estimate to -1.6 percentage point in the latest estimate. Consumer spending and business fixed investment were revised up slightly, while net exports and state and local government spending was revised down slightly. 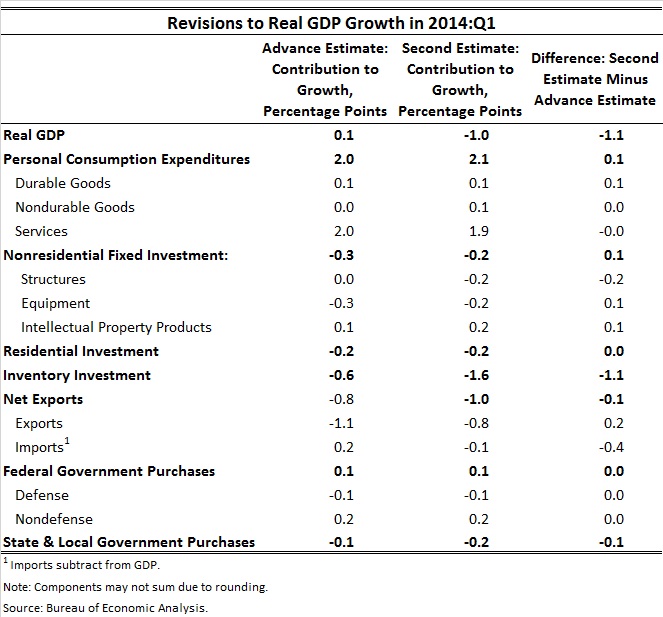 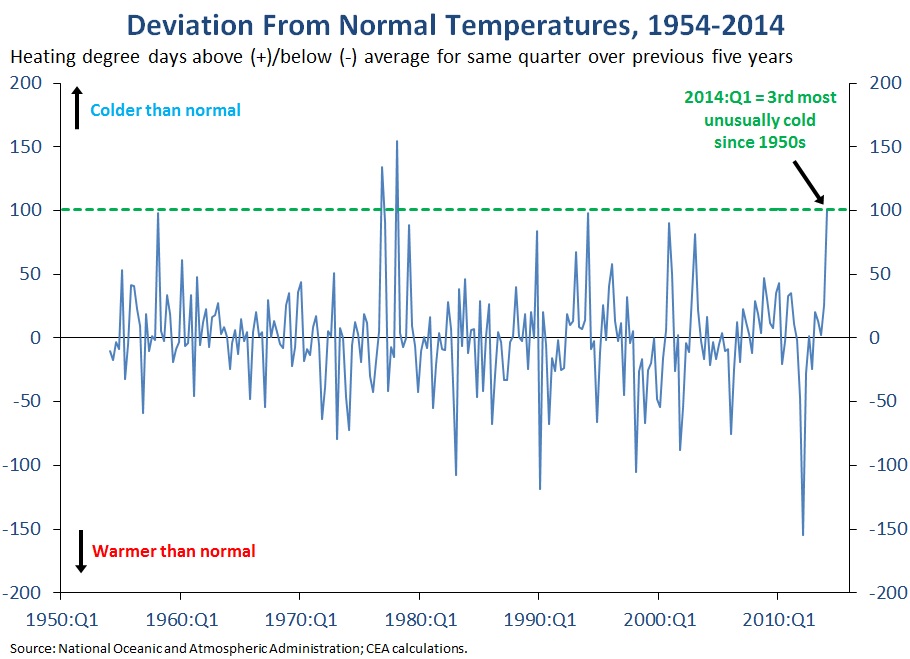 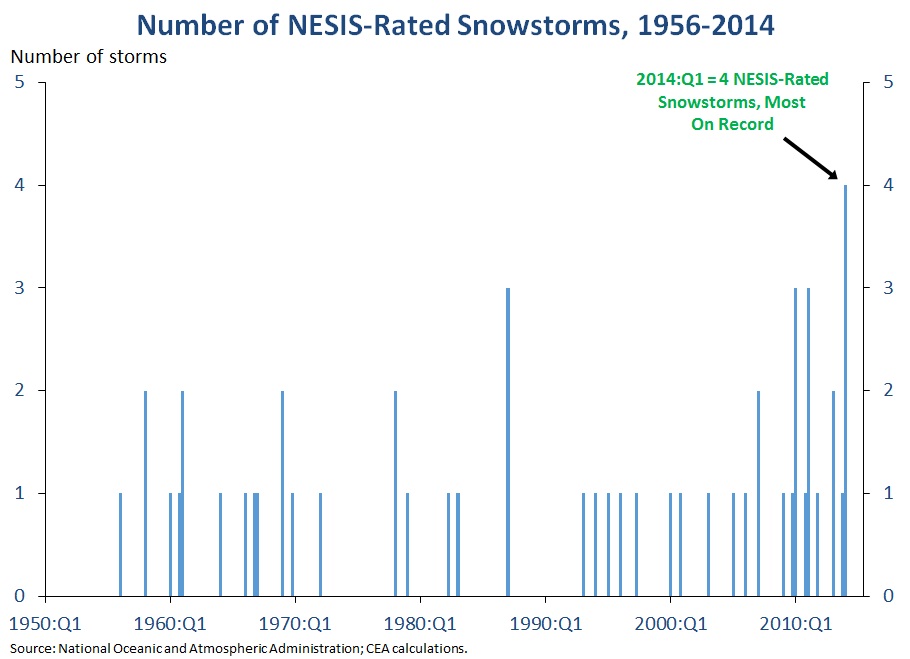 4. Within the first quarter, several key indicators were lower in January and/or February before rebounding strongly in March, suggesting that the severe weather had a disruptive effect that only began to abate at the end of the quarter. Light vehicle sales, average weekly hours, core retail and food service sales, and core capital goods shipments dipped starting in December and/or January before bouncing back in March, and so were left little changed for the quarter as a whole. One outside group has estimated that the elevated snowfall in the first quarter slowed the annual rate of GDP growth by 1.4 percentage points, with all of that lost activity to be made up in the second quarter.

Additionally, it is worth noting that consumer spending on utilities surged more than 40 percent at an annual rate in the first quarter, the largest increase on record (with data back to 1959). While this weather-related jump in utilities spending added to GDP growth, it was likely more than offset by the constraining effect of severe weather on other categories, including other components of consumer spending (like autos, household furnishings, and restaurants), some components of private and public fixed investment, and exports. 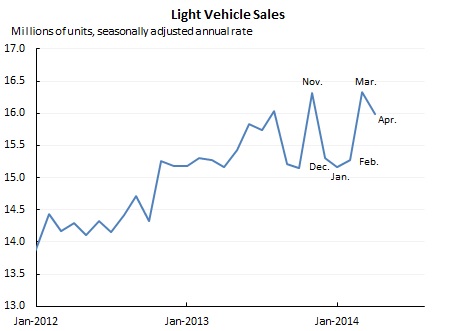 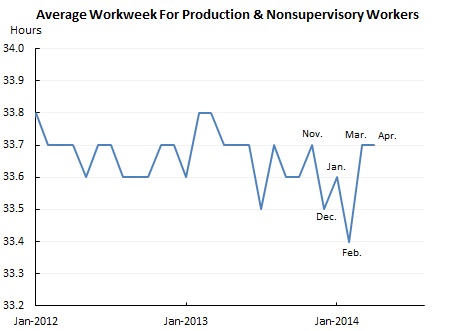 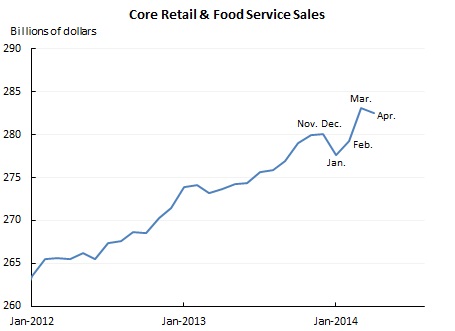 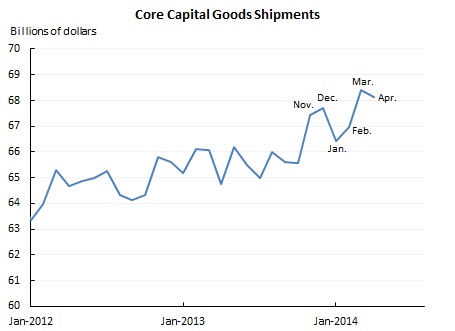 5. The federal sector made a small positive contribution to growth for the first time in over a year, in part because the effect of the shutdown in the fourth quarter reversed. The Bureau of Economic Analysis (BEA) reported that in the fourth quarter, federal worker furloughs resulting from the government shutdown directly reduced GDP growth by 0.3 percentage point at an annual rate; other effects of the shutdown (including reduced government purchases of goods and services) also likely contributed to the large 1.0 percentage point negative contribution from the federal government.

In the first quarter of 2014, the federal sector made a small (0.05) percentage point positive contribution to growth, in part due to the return to a full quarter of undisrupted federal employee work hours. Federal spending is subject to a number of influences, including the winding down of overseas military operations, the withdrawal of temporary support measures enacted earlier in the recovery, and in 2013, the sequester. The budget agreement reached late last year should create a more neutral fiscal climate in 2014 than in 2013, and while there is still a need to do more to invest in growth, the reduced fiscal drag is a key reason that outside forecasters expect growth to strengthen over the remainder of the year. 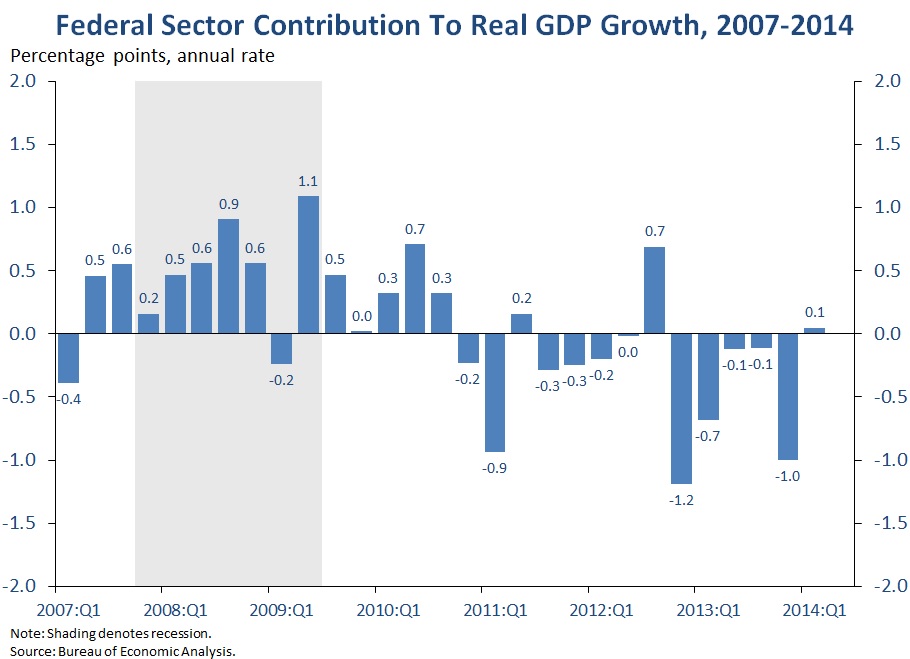