The Changing Role of Fathers in the Workforce and Family

June 9, 2014 at 1:39 PM ET by Jason Furman and Betsey Stevenson
Twitter Facebook Email
Summary:
As part of the lead-up to the White House Summit on Working Families, we’ve been exploring policies and best practices that help both families and businesses manage the increasingly complicated interaction between work and family-life.

As part of the lead-up to the White House Summit on Working Families, we’ve been exploring policies and best practices that help both families and businesses manage the increasingly complicated interaction between work and family-life. Today, Administration officials hosted a discussion—the first of its kind at the White House—on the state of working dads and how businesses can create a win-win culture to enable these fathers to be more involved parents and better employees.

The need to rethink workplace policies to work better for parents is not just about working moms or women—working fathers are a key piece of the story as well. As the data compiled by the Council of Economic Advisers on “The Economics of Fatherhood and Work” show, the role of fatherhood has been changing with fathers taking a more hands-on approach to raising children. This change is both cultural and economic, with families responding to the reality of women’s increased role in the labor market. Nearly two-thirds of children now have either two working parents or a single parent who is working, contributing to the trend of father’s increasingly caring for children. Today, one in fourteen fathers with kids under 18 are single parents—a striking seven-fold increase since 1970—and dads are increasingly staying at home when their wives work.

Yet most dads, like moms, are trying to balance work and their parenting responsibilities. One in five kids at daycare have a dad identified as the primary caregiver, and most of these dads are employed. Modern dads are spending more time on both childcare and housework while balancing a career. More dads today change diapers, do school pick-up, help with homework, and have to be able to pick up a sick kid from preschool. With more time spent on childcare and housework and little reduction in time spent in the workplace, fathers are increasingly reporting work-life conflict. In a reversal, today's fathers are more likely to report difficulties balancing work and family than mothers. 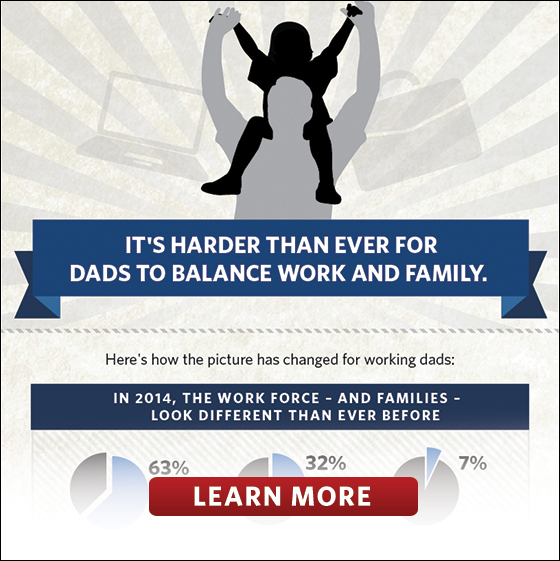 These changes suggest the need for policies and best practices, such as paid leave and workplace flexibility, which help mothers and fathers better balance the competing demands of work and caregiving. Research has shown that these policies can be good for business by helping to recruit talented workers; lowering worker turnover; and boosting morale, worker productivity, and profits. For example, although some businesses were initially concerned about California’s paid leave law before implementation, in a recent survey , more than 90 percent reported no negative effect or a positive effect of the law on profitability, turnover, productivity, and morale. And other studies have shown that flexibility can lead to improved productivity and is correlated with well managed businesses. Investors also see these policies as good for profitability—stock prices rise when businesses announce new family-friendly policies.

At today’s event, we heard leading experts, working dads, business leaders, and Administration officials discuss their insights on modern fatherhood and how we can help men balance work and family demands. Our participants—employees and small, medium and large businesses—corroborated the research that shows that flexibility and paid leave policies can be good for business.

In the run-up to the working families summit on June 23rd, we look forward to further engaging with experts, businesses, researchers, and other stakeholders to explore strategies that make full use of America’s talent and increase globally competitiveness while ensuring that both mothers and fathers can also be successful parents.