When I finally caught up with World War II veteran Harry Kulkowitz a couple of weeks ago, it was a brief conversation. I asked him what was most memorable about Normandy, and he replied, “Which time? The time I jumped in and got shot at?”

On the 70th anniversary of the D-Day invasion of Normandy, Kulkowitz, the son of Jewish immigrants, who lied about his age to fight the Nazis, joined with 400 other World War II veterans in Normandy, France.

It was his sixth trip back to Normandy, but this was his first time meeting and being honored by the President. President Obama thanked him and others for their service and sacrifice, and called out to a new generation of combat veterans to live up to the legacy of liberty that stormed upon the sands of Omaha Beach and washed away the tyranny of the Axis Powers. 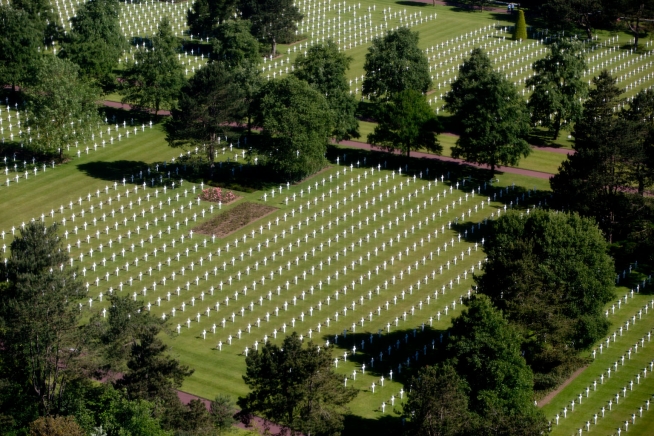 President Obama implored all Americans to battle cynicism, resist hopelessness, and draw upon the courage that was displayed on that day to bring out the best in all of us.

Think of Wilson Colwell, who was told he couldn’t pilot a plane without a high school degree, so he decided to jump out of a plane instead.  And he did, here on D-Day, with the 101st Airborne when he was just 16 years old.

Think of Harry Kulkowitz, the Jewish son of Russian immigrants, who fudged his age at enlistment so he could join his friends in the fight…

Think of “Rock” Merritt, who saw a recruitment poster asking him if he was man enough to be a paratrooper -- so he signed up on the spot. 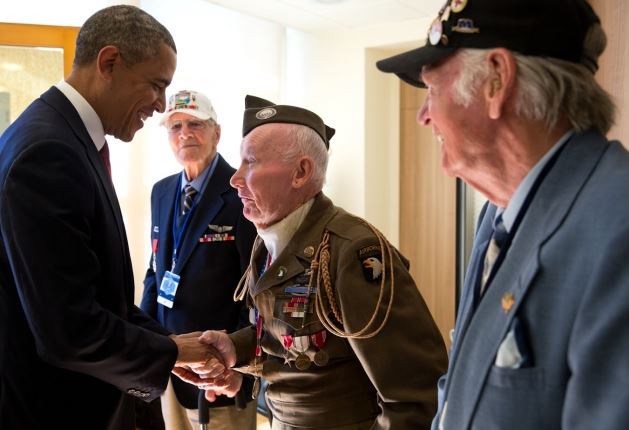 In less than a week, 1 million would follow Wilson, Harry, and Rock and storm onto the beaches of France. Decades later, in nearly 15 years of conflict, over 2.6 million Americans have served in Iraq and Afghanistan. Yet the service and sacrifice of these two combat generations, separated by almost a century, were joined that day as the President called the newest generation to live up to the legacy of the Greatest Generation.

And, gentlemen, I want each of you to know that your legacy is in good hands.  For in a time when it has never been more tempting to pursue narrow self-interest, to slough off common endeavor, this generation of Americans, a new generation -- our men and women of war -- have chosen to do their part as well.

Rock, I want you to know that Staff Sergeant Melvin Cedillo-Martinez, who’s here today, is following in your footsteps.  He just had to become an American first -- because Melvin was born in Honduras, moved to the United States, and joined the Army.  After tours in Iraq and Afghanistan, he was reassigned to the 82nd Airborne.  And Sunday, he’ll parachute into Normandy.  “I became part of a family of real American heroes,” he said.  “The Paratroopers of the 82nd.”

Wilson, you should know that Specialist Jannise Rodriguez joined the Army not even two years ago, was assigned to the 101st Airborne, and just last month earned the title of the 101st Airborne Division Air Assault Soldier of the Year.  And that’s inspiring but not surprising, when the women of today’s military have taken on responsibilities, including combat, like never before.

I want each of you to know that their commitment to their fellow servicemembers and veterans endures.  Sergeant First Class Brian Hawthorne’s grandfather served under General Patton and General MacArthur.  Brian himself served two tours in Iraq, earned the Bronze Star in Baghdad for saving the life of his best friend, and today, he and his wife use their experience to help other veterans and military families navigate theirs.  And Brian is here in Normandy to participate in Sunday’s jump, and here, just yesterday, he reenlisted in the Army Reserve.

And this generation -- this 9/11 Generation of servicemembers -- they, too, felt something.  They answered some call; they said “I will go.”  They, too, chose to serve a cause that’s greater than self -- many even after they knew they’d be sent into harm’s way.  And for more than a decade, they have endured tour after tour.

As we were reminded on June 6 – and should be reminded of everyday – the legacy that these men and women have left will endure for all time. Whether they are sons of immigrants, women in uniform, or have a long family history of military service, they now have an opportunity to serve.

Koby Langley is the Director of Veteran, Wounded Warrior, and Military Family Engagement at the White House.