Responding to the Situation in Iraq

June 13, 2014 at 3:32 PM ET by David Hudson
Twitter Facebook Email
Summary:
Get the latest information on the Obama administration's response to the situation in Iraq.

Today, after a meeting with his national security team, President Obama delivered a statement from the White House Press Briefing Room on the situation in Iraq and the U.S. response. Watch his remarks below:

The President made clear that he has "no greater priority than the safety of our men and women serving overseas," which is why he is taking steps to relocate some of our embassy personnel, and also sending reinforcements to better secure American facilities.

He noted that the U.S. has significantly increased intelligence, surveillance, and reconnaissance assets in order to get a better picture of what's happening in Iraq. "This will give us a greater understanding of what ISIL is doing, where it's located, and how we might support efforts to counter this threat," he said.

The President also said that the U.S. will keep increasing our support to Iraqi security forces, reiterating that U.S. forces "will not be returning to combat in Iraq, but we will help Iraqis as they take the fight to terrorists who threaten the Iraqi people."

The President emphasized that “the best and most effective response to a threat like ISIL will ultimately involve partnerships where local forces, like Iraqis, take the lead.”

This afternoon, from the South Lawn of the White House, President Obama delivered a statement on the current situation in Iraq.

Yesterday, I convened a meeting with my National Security Council to discuss the situation there, and this morning I received an update from my team.  Over the last several days, we’ve seen significant gains made by ISIL, a terrorist organization that operates in both Iraq and in Syria.  In the face of a terrorist offensive, Iraqi security forces have proven unable to defend a number of cities, which has allowed the terrorists to overrun a part of Iraq’s territory.  And this poses a danger to Iraq and its people.  And given the nature of these terrorists, it could pose a threat eventually to American interests as well.

Now, this threat is not brand new.  Over the last year, we’ve been steadily ramping up our security assistance to the Iraqi government with increased training, equipping and intelligence.  Now, Iraq needs additional support to break the momentum of extremist groups and bolster the capabilities of Iraqi security forces.

The President emphasized that the United States will not send any troops back into combat in Iraq, although he has asked his national security team to prepare other options to support Iraqi security forces. He also made clear in his remarks that the current situation "is not solely or even primarily a military challenge."

Over the past decade, American troops have made extraordinary sacrifices to give Iraqis an opportunity to claim their own future.  Unfortunately, Iraq’s leaders have been unable to overcome too often the mistrust and sectarian differences that have long been simmering there, and that’s created vulnerabilities within the Iraqi government as well as their security forces.

So any action that we may take to provide assistance to Iraqi security forces has to be joined by a serious and sincere effort by Iraq’s leaders to set aside sectarian differences, to promote stability, and account for the legitimate interests of all of Iraq’s communities, and to continue to build the capacity of an effective security force.  We can’t do it for them.  And in the absence of this type of political effort, short-term military action, including any assistance we might provide, won’t succeed.

"Iraq's leaders have to demonstrate a willingness to make hard decisions and compromises on behalf of the Iraqi people in order to bring the country together," President Obama said. "In that effort, they will have the support of the United States and our friends and our allies."

He concluded his statement by reiterating that the United States' top priority is to continue "being vigilant against any threats to our personnel serving overseas," adding that the Administration will consult closely with Congress about appropriate action going forward, and keep Americans fully informed on the next steps in this situation. 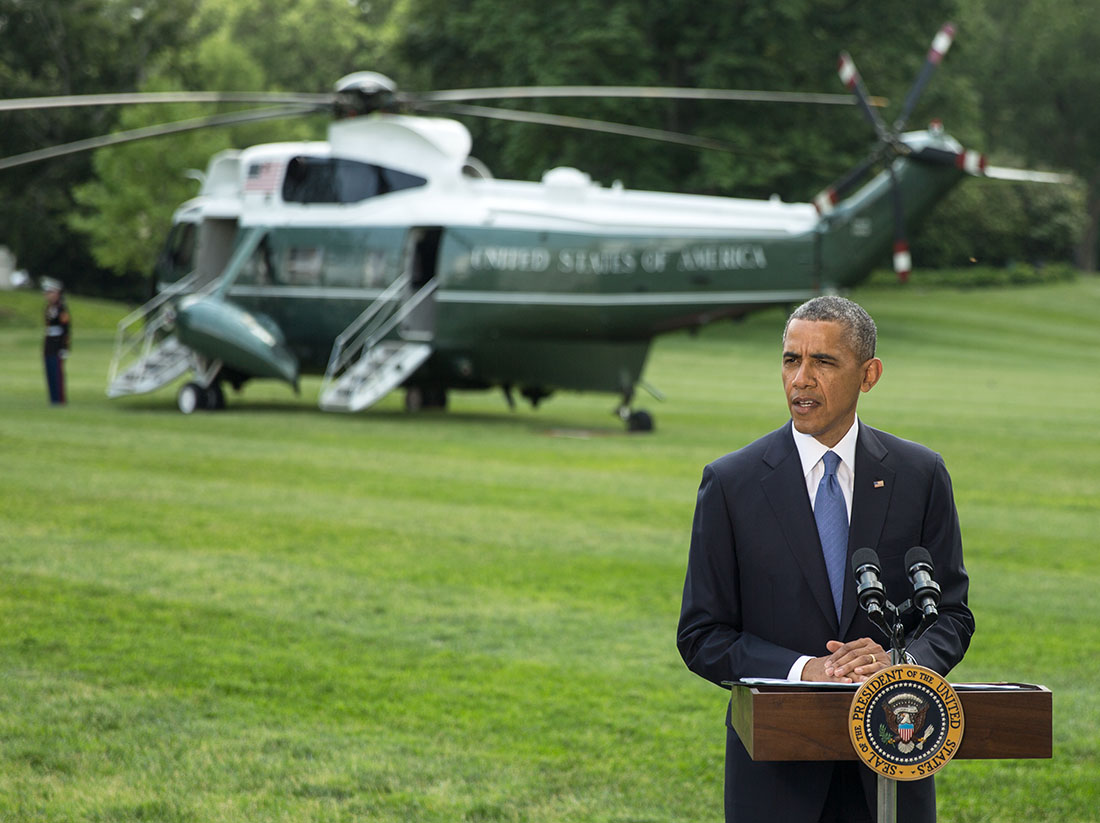 President Barack Obama delivers a statement regarding Iraq, prior to departure from the White House South Lawn aboard Marine One en route to Bismarck, N.D., June 13, 2014. (Official White House Photo by David Lienemann)