June 16, 2014 at 1:42 PM ET by David Hudson
Twitter Facebook Email
Summary:
President Obama addresses the 2014 graduating class of UC Irvine and challenges them to get involved in one of the most significant long-term challenges our planet faces: the growing threat of a rapidly changing climate.

On Saturday afternoon, President Obama addressed the University of California, Irvine's 2014 graduating class and challenged them to get involved in one of our planet's most pressing issues: the growing threat of a rapidly changing climate.

Speaking to more than 30,000 people in attendance at Angel Stadium in Anaheim, the President told the UC Irvine community that he was there for one simple reason: because they asked.

"The UC Irvine community sent 10,000 postcards to the White House asking me to come speak today," the President said. Some people tried to guilt him into coming, while others tried bribery. "I'll support the Chicago Bulls," someone wrote. And another student wanted the President to speak because she thought UC Irvine was "super underrated."

The President reminded the crowd that this young lady could just as well have been talking about her own generation:

In your young lives, you’ve seen dizzying change, from terror attacks to economic turmoil; from Twitter to Tumblr. Some of your families have known tough times during the course of the worst economic crisis since the Great Depression. You’re graduating into a still-healing job market, and some of you are carrying student loan debt that you’re concerned about. And yet, your generation -- the most educated, the most diverse, the most tolerant, the most politically independent and the most digitally fluent in our history -- is also on record as being the most optimistic about our future.

And President Obama agreed that this generation should be optimistic, noting that there are fewer Americans at war, more folks have health insurance, and businesses have added millions of new jobs — all in the time since most of this graduating class left high school.

But he reminded the graduates of the many challenges we still face, spending the majority of his address urging them to fight the cynicism and the naysayers and to act on climate change — "one of the most significant long-term challenges that our country and our planet faces." 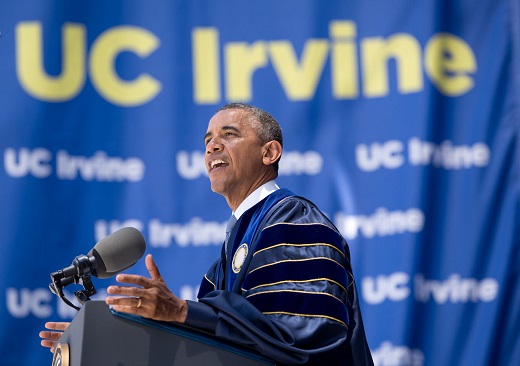 The President also noted that climate change is a unique issue due to the nature of the opposition to action:

It’s pretty rare that you’ll encounter somebody who says the problem you’re trying to solve simply doesn’t exist. When President Kennedy set us on a course for the moon, there were a number of people who made a serious case that it wouldn’t be worth it; it was going to be too expensive, it was going to be too hard, it would take too long. But nobody ignored the science. I don’t remember anybody saying that the moon wasn’t there or that it was made of cheese.

He continued, commenting on how certain members of Congress still believe that climate change is a hoax or a fad, or that our planet is actually cooling. Others avoid the question altogether.

They say -- when they’re asked about climate change, they say, “Hey, look, I’m not a scientist.” And I’ll translate that for you. What that really means is, “I know that manmade climate change really is happening, but if I admit it, I’ll be run out of town by a radical fringe that thinks climate science is a liberal plot, so I’m not going to admit it.”

President Obama reminded those in attendance that historically this has not been a partisan issue — Presidents from Richard Nixon to George H.W. Bush have acted to protect our environment. But Congress refuses to take action, and the broadcast networks' nightly newscasts only spend a few minutes per month discussing climate change.

The President then made clear that he wasn't telling the graduates this in order to discourage them, but rather to "light a fire" under them. "As the generation getting shortchanged by inaction on this issue," he said, "I want all of you to understand you cannot accept that this is the way it has to be."

"This is a fight that America must lead," he continued. "So I'm going to keep doing my part for as long as I hold this office and as long as I'm a citizen once out of office. But we're going to need you, the next generation, to finish the job."

It’s no accident that when President Kennedy needed to convince the nation that sending Americans into space was a worthy goal, he went to a university. That’s where he started. Because a challenge as big as that, as costly as that, as difficult as that, requires a spirit of youth. It requires a spirit of adventure; a willingness to take risks. It requires optimism. It requires hope. That day, a man told us we’d go to the moon within a decade. And despite all the naysayers, somehow we knew as a nation that we’d build a spaceship and we’d meet that goal.

"Cynicism has never won a war, or cured a disease, or started a business, or fed a young mind, or sent men into space," President Obama said. "Cynicism is a choice. Hope is a better choice."

Hope is the fact that, today, the single largest age group in America is 22 years old who are all just itching to reshape this country and reshape the world. And I cannot wait to see what you do tomorrow.

During the President's speech, he announced a $1 billion competition to combat the effects of climate change and help communities build more resilient infrastructure.