The President Talks Manufacturing and Innovation at TechShop Pittsburgh

June 18, 2014 at 12:15 PM ET by David Hudson
Twitter Facebook Email
Summary:
President Obama travels to Pittsburgh and stops by the city's TechShop to talk about manufacturing and innovation, and answer some questions from the workers in attendance.

Yesterday afternoon, President Obama stopped by TechShop Pittsburgh to talk about manufacturing and innovation, and answer some questions from those in attendance.

TechShop, which has multiple locations across the country, describes itself as "part fabrication and prototyping studio, part hackerspace and part learning center." The company provides its members access to professional tools, equipment, and software, and gives them a space to make and design almost anything — all "for the price of a gym membership," as the President said yesterday.

In his remarks, the President explained how technological advances are changing the face of manufacturing, giving more people the opportunity to be inventors and producers:

Part of what’s exciting is that, traditionally, manufacturing was viewed -- and we’re in a steel town here in Pittsburgh -- that manufacturing meant big factories, all kinds of smoke and fire, and a lot of heavy capital. But because of advances in technology, part of the opportunity is now to make the tools that are needed for production and prototypes are now democratized. They’re in the hands of anybody who’s got a good idea.

And what we’ve been trying to do is to encourage more and more entrepreneurs, inventors to not just take root here but also have access to the kinds of equipment and technology -- whether it’s 3D printers or laser cutters -- that allow them to design their own ideas, create prototypes, put them out to market, test them, tinker with them, refine them, and ultimately create brand new businesses.

The President also remarked on the progress that the U.S. has made in manufacturing over the past several years, noting that we've created 646,000 manufacturing jobs since February 2010 — the fastest pace of job growth since the 1990s.

"We actually have companies now saying that America is the number-one place to do business again," he said, "something that we haven't seen in over 12 years." 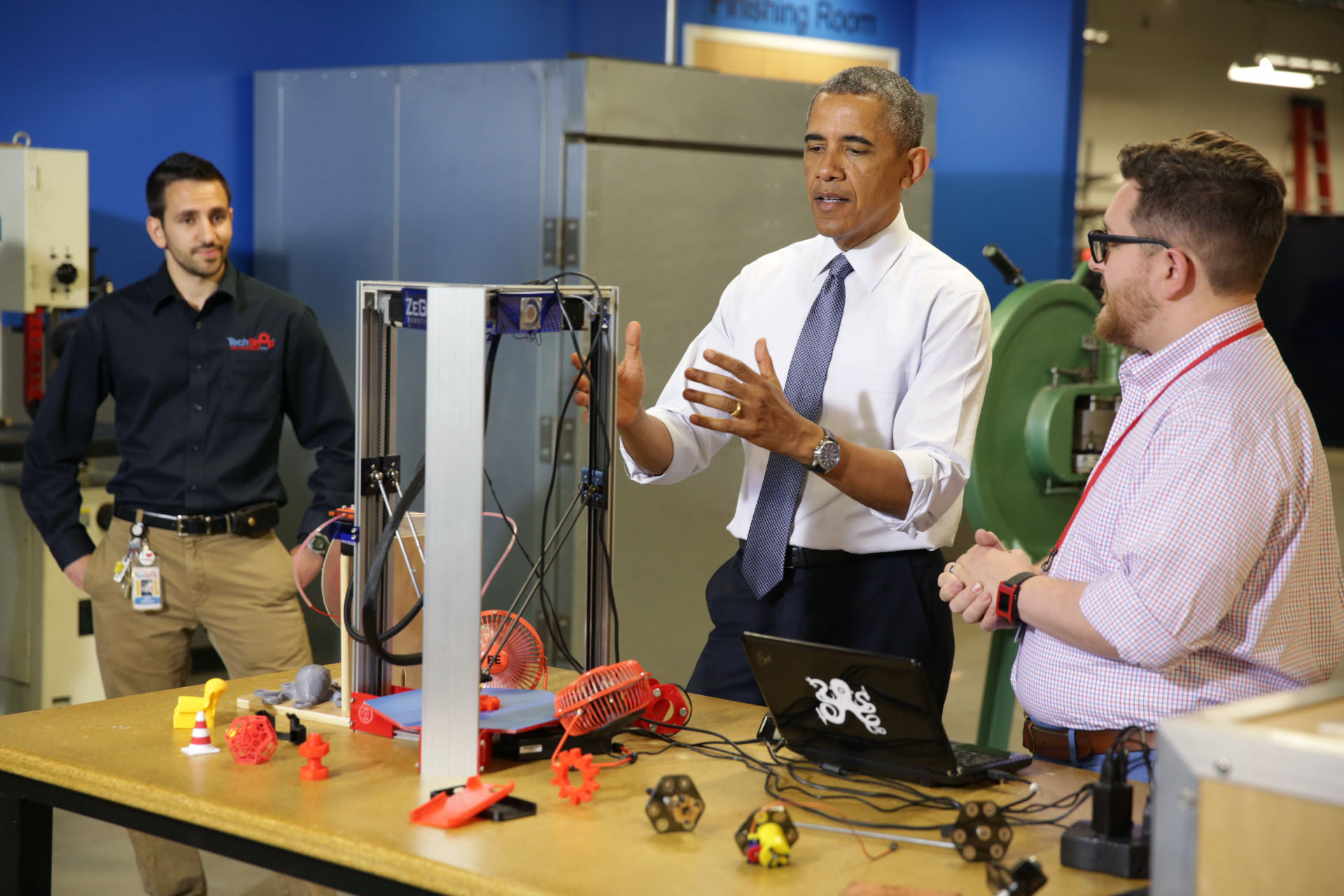 President Obama concluded his remarks explaining that much of his agenda for economic development over the next two years revolves around spurring "more manufacturing, more homegrown ideas, more research and development."

Already, we’ve been able to get 80 cities to commit to working in a public-private partnership to generate more manufacturing efforts in their respective cities. We’ve create four high-tech advanced manufacturing hubs, and we have budgeted to create a whole lot more around the country. And some of it has to do with advanced materials, some of it has to do with 3D printing. The idea is, we start building an ecosystem, a network of companies, universities, researchers, entrepreneurs, all of whom start really focusing and becoming experts on a particular facet of industries of the future.

That’s how we’re going to build more and more niches that allow us to dominate the market and sell more products made in America, not just here in the United States but overseas.

"As long as I’m President, at least, one of my top priorities is going to be to continue to build up manufacturing," he said. "I want to make sure that if you work hard in this country, if you’ve got a good idea, if you’re willing to put in some sweat equity, that you can make it here in America and live out your American Dream."