At the White House this afternoon, President Obama awarded the Medal of Honor to Corporal William "Kyle" Carpenter, a retired United States Marine. Corporal Carpenter received the medal for his courageous actions during combat operations against an armed enemy in Helmand Province, Afghanistan.

By all accounts, Kyle shouldn't be alive today. On November 21, 2010, Kyle's platoon woke up to the sound of AK-47 fire. As their compound began taking fire, Kyle and Lance Corporal Nicholas Eufrazio took cover up on a roof, low on their backs behind a circle of sandbags. And then a grenade landed nearby, its pin already pulled.

In the President's remarks, he detailed the horrific events that followed:

Kyle has no memory of what happened next. What we do know is that there on that rooftop he wasn’t just with a fellow Marine, he was with his best friend. Kyle and Nick had met in training. In Afghanistan they patrolled together, day and night, a friendship forged in fire. Kyle says about Nick, “He was my point man, and I loved him like a brother.”

When the grenade landed, other Marines in the compound looked up and saw it happen. Kyle tried to stand. He lunged forward toward that grenade, and then he disappeared into the blast. Keep in mind, at the time, Kyle was just 21 years old. But in that instant, he fulfilled those words of Scripture: “Greater love hath no man than this; that a man lay down his life for his friends.”

They found Kyle lying face down, directly over the blast area. His helmet was riddled with holes. His gear was melted. Part of his Kevlar vest was blown away. One of the doctors who treated him later said Kyle was “literally wounded from the top of his head to his feet.”

"Hand grenades are one of the most awful weapons of war," the President said. "When it detonates, its fragments shoot out in every direction. And even at a distance, that spray of shrapnel can inflict devastating injuries on the human body. Up close, it’s almost certain death."

The President honored Kyle today because he "faced down that terrible explosive power, that unforgiving force, with his own body -- willingly and deliberately -- to protect a fellow Marine." Kyle was willing to make the ultimate sacrifice to save the lives of others. 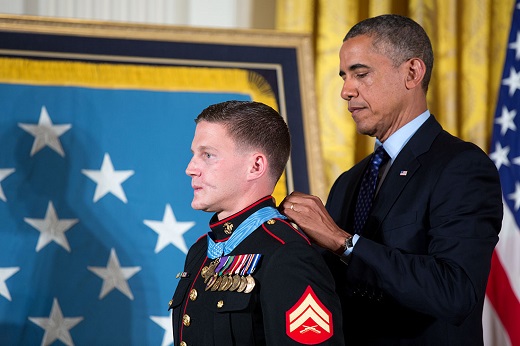 Kyle's unselfish and courageous actions resulted in a long and agonizing recovery:

Eventually, Kyle woke up after five weeks in a coma. I want you to consider what Kyle has endured just to stand here today -- more than two and a half years in the hospital. Grueling rehabilitation. Brain surgery to remove shrapnel from his head. Nearly 40 surgeries to repair a collapsed lung, fractured fingers, a shattered right arm broken in more than 30 places, multiple skin grafts. He has a new prosthetic eye, a new jaw, new teeth -- and one hell of a smile.

President Obama stressed that Kyle's story and recovery is a model for all Americans of the strength and resilience that defines us. "After everything he's been through," the President continued, "he skis, he snowboards, he’s jumped from a plane -- with a parachute, thankfully."

Kyle has run a 6-mile Mud Run and completed the Marine Corps Marathon. He's in school getting stellar grades. "And by the way, he's only 24 years old, and says, 'I am just getting started.'"

Corporal William Kyle Carpenter should not be alive today, but the fact that he is gives us reason to trust that there is indeed a bigger plan. So God bless you, Kyle. God bless all who serve and protect the precious and amazing life that we are blessed with. May God continue to bless and keep strong the United States of America. Semper Fi. 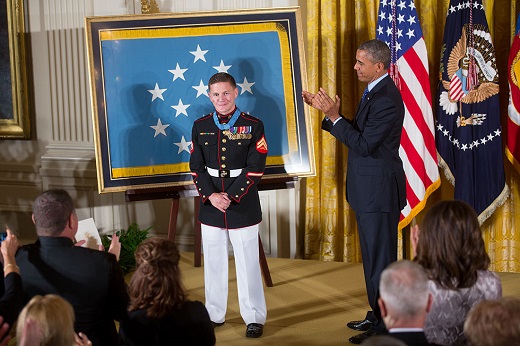 President Barack Obama leads an ovation for Corporal William "Kyle" Carpenter, U.S. Marine Corps (Ret.), after awarding him the Medal of Honor during a ceremony in the East Room of the White House. June 19, 2014. (Official White House Photo by Lawrence Jackson)