The President and First Lady's Historic Visit to Indian Country

June 20, 2014 at 1:00 PM ET by Raina Thiele
Twitter Facebook Email
Summary:
President Obama makes a historic trip to the Standing Rock Sioux Tribal Nation in Cannonball, North Dakota, where he and the First Lady meet with Native American youth, tribal leaders, and attend the tribe’s annual Flag Day celebration. This trip marks his first visit to Indian Country since taking office, and one of the few trips to an Indian reservation by a sitting President. 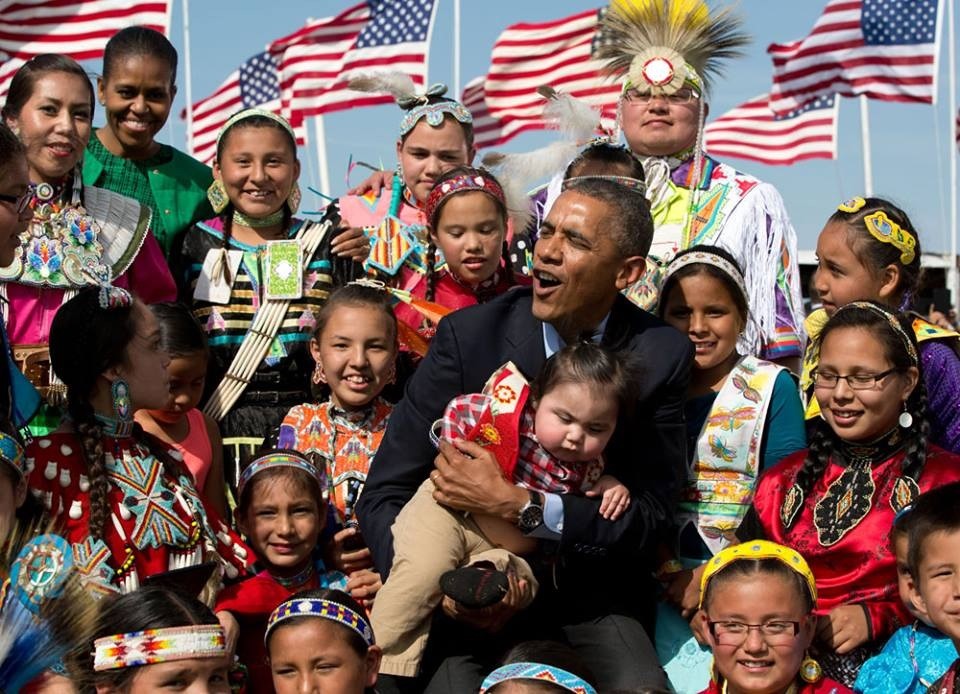 On Friday, June 13, President Obama made a historic trip to Indian Country when he traveled to the Standing Rock Sioux Tribal Nation in Cannonball, North Dakota. This trip marked his first visit to Indian Country since taking office, and one of the few trips to an Indian reservation by a sitting President. Accompanied by the First Lady, the President met with Native American youth, tribal leaders, and attended the tribe’s annual Flag Day celebration where he spoke to Indian Country.

The President first announced his plans to visit the Standing Rock Sioux Tribe on June 5 in an Indian Country Today op-ed that described his goals for strengthening economic development and educational achievement in Indian Country.

Since taking office, President Obama and his Administration have worked closely with tribal leaders, and last year he created the White House Council on Native American Affairs to ensure cross-agency coordination and engagement with Indian Country. The President has also hosted five annual White House Tribal Nations Conferences, an event where he invites leaders from all federally recognized tribes to engage in direct talks with high-level Administration officials.

As the President said in North Dakota, “Today, honoring the nation-to-nation relationship with Indian Country isn’t the exception; it’s the rule. And we have a lot to show for it.”

During his remarks at the powwow, the President discussed his Administration’s nation-to-nation relationship with tribes and promised to work with tribal leaders to expand economic and educational opportunity for Native Americans.

“My Administration is determined to partner with tribes, and it’s not something that just happens once in a while," the President said. "It takes place every day, on just about every issue that touches your lives. And that’s what real nation-to-nation partnerships look like.”

The President focused on his efforts to improve education in Indian Country. In conjunction with his trip, the White House released a fact sheet on economic development and education, including a blueprint for reforming the Bureau of Indian Education. He also discussed his plans to invest in job training, tribal colleges, roads, high-speed Internet, and energy projects.

“We can follow the lead of Standing Rock’s most famous resident, Chief Sitting Bull," the President remarked. "He said, ‘Let’s put our minds together to see what we can build for our children.’ So let’s put our minds together to build more economic opportunity in Indian Country -- because every American, including every Native American, deserves the chance to work hard and get ahead.”

Click here for highlights from the President’s historic trip to Indian Country.

Raina Thiele is the Associate Director in the White House Office of Intergovernmental Affairs.