A Day in the Life: Rebekah from Minneapolis

June 26, 2014 at 11:15 AM ET by Lindsay Holst
Twitter Facebook Email
Summary:
Today, the President will travel to Minnesota, where he'll meet Rebekah -- a mom from Minneapolis -- for the first in a series of "Day in the Life" trips he'll be taking around the country this summer.

This past March, a mom from Minneapolis named Rebekah wrote the President a letter about the increasing costs of taking care of her family. She told him about her day-to-day struggles, and let him know what she thinks needs to change.

Today, the President is traveling to Minnesota to spend some time with her.

That's because Rebekah's experience is representative of the experience of millions of Americans across the country right now: Even though our economy has undoubtedly made a comeback, too many folks are still stretched too thin.

This is the first in a series of "day in the life" trips the President will be taking over the course of the summer -- an opportunity to communicate directly with the people he's working for every day.

We want to make sure you see what the President sees, too.

Meet Rebekah and learn more about her story here -- and follow along all day to see updates and highlights from the President's day.

The President departs Joint Base Andrews.

A group of ROTC students watched and cheered at the gate as the President stepped out of Marine One and then boarded Air Force One.

President Obama waves from AF1 to military personnel at Joint Base Andrews. Next stop: Minneapolis. pic.twitter.com/g7BLuQ1HSZ

Air Force One touches down in Minnesota.

Just landed in Minnesota w Potus. First up, lunch with a working mom who wrote him a letter abt the challenges facing working families.

"Our goal is to give the president an authentic opportunity to see at least part of the world through the eyes of this one working mom in Minnesota."

The President sits down for lunch with Rebekah.

The President shared a booth with Rebekah at Matt's Bar, known for its "Jucy Lucy" burger, in south Minneapolis' Corcoran neighborhood.

POTUS lunches with #Rebekah at Matt's Bar. She wrote him a letter and got a response over lunch. #DayInTheLife pic.twitter.com/arFI9qKtho 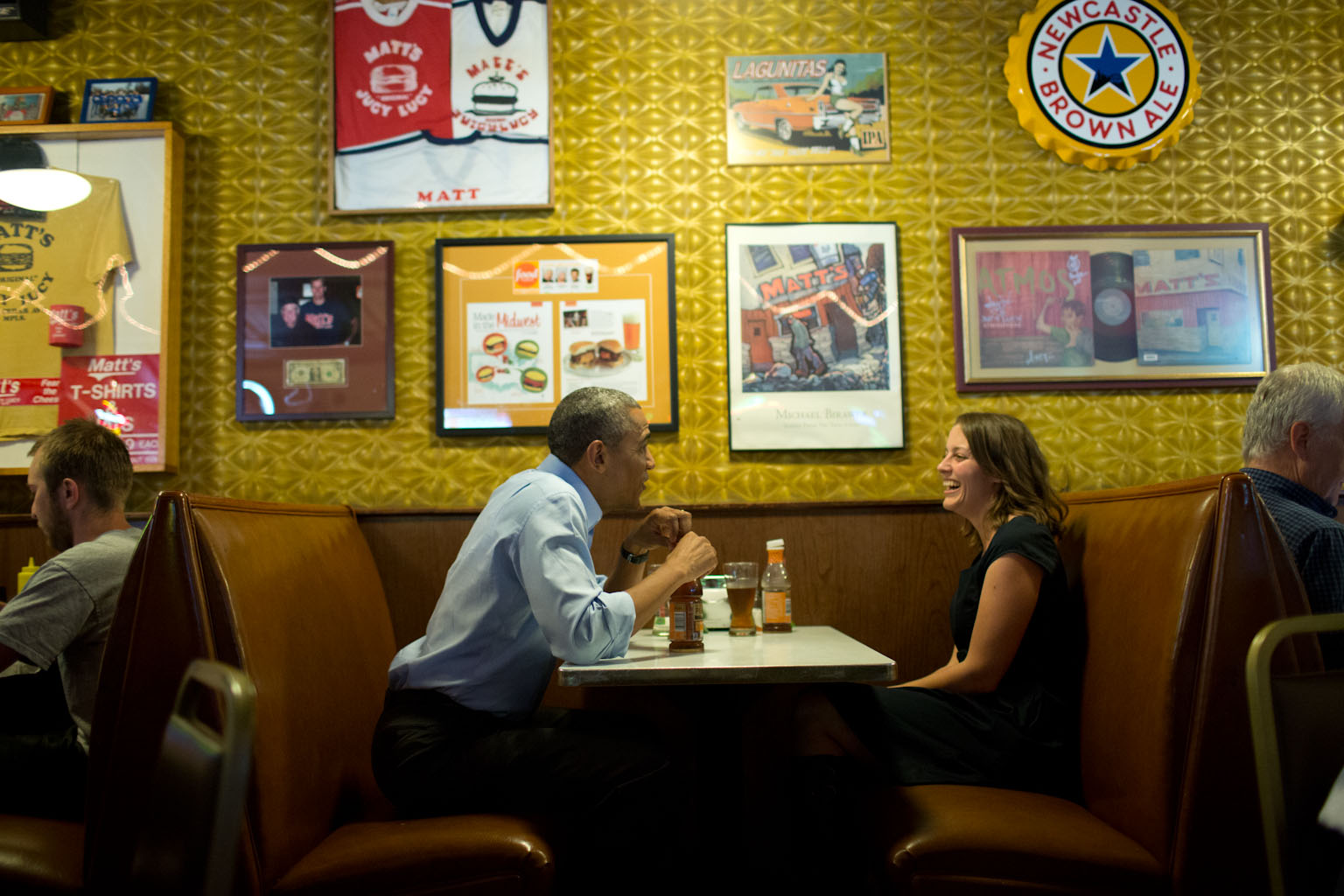 President Barack Obama has lunch with Rebekah Erler at Matt's Bar in Minneapolis, Minn., June 26, 2014. Erler is a 36-year-old working wife and mother of two pre-school aged boys who had written the President a letter about economic difficulties. (Official White House Photo by Pete Souza)

And then they continue on to a town hall meeting at a nearby park.

The bear is loose and hosting a town hall meeting at Minnehaha Park in MN. #WHLive pic.twitter.com/WZeKa7Alz6

"You guys are the reason I ran. You're who I'm thinking about every single day."

"We can make life a little better for American families who are doing their best." —President Obama: http://t.co/4O7ux1zTik

Potus distills msg @ today's townhall: I know middle class families r working harder than ever. I'm fighting for u. You're the reason I ran.

Next, the President made a few stops in downtown St. Paul. 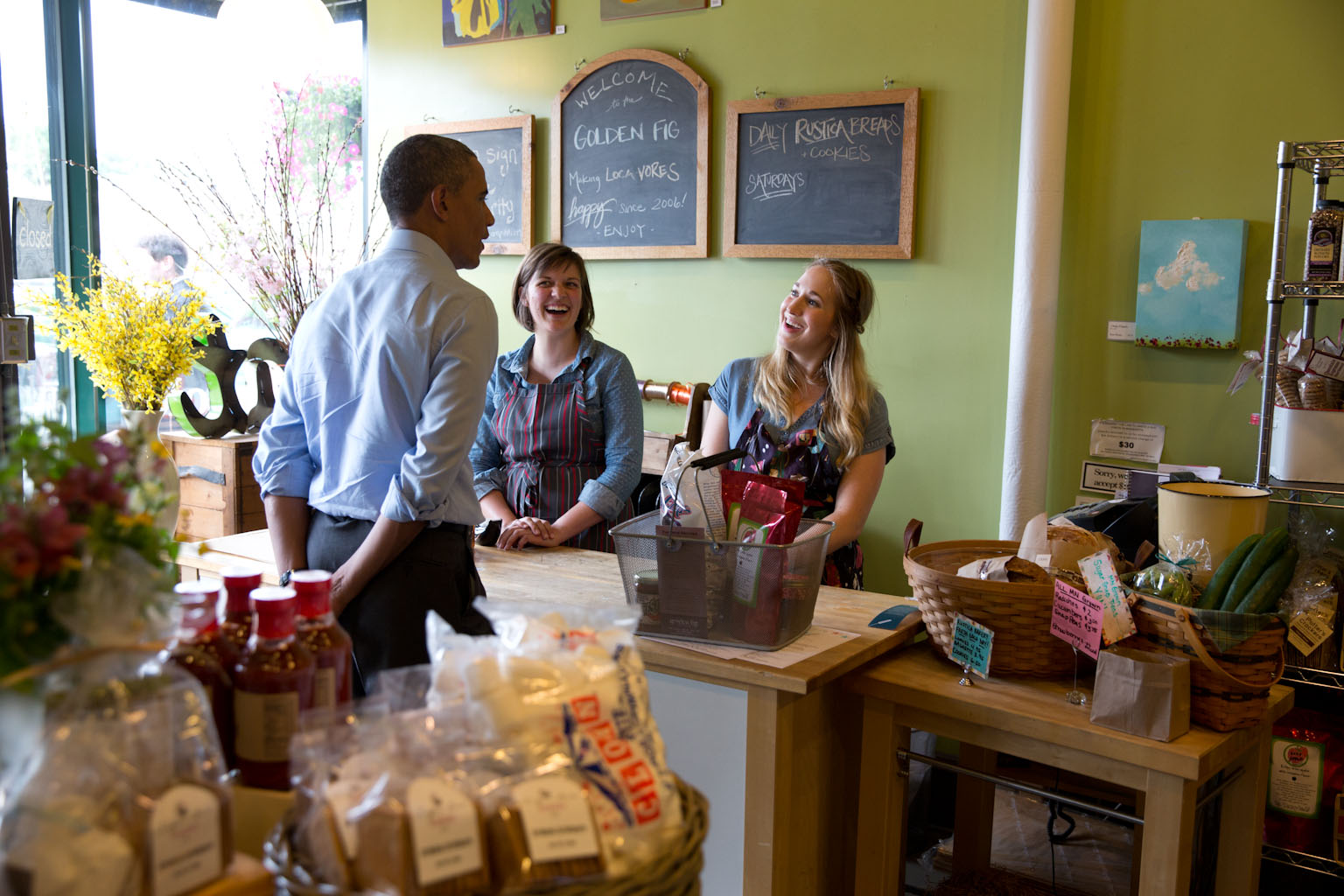 Potus visits with local ladies as he stops for ice cream on a lovely summer evening in St Paul. #DayInTheLife pic.twitter.com/WPYudKw5I5